Restoration is the most sustainable way of building, significantly reducing construction waste while maximizing available resources. Often, traditional, vernacular architecture is full of sustainable design solutions, including features such as brick vents that naturally increase air circulation and white plaster exteriors that reflect solar heat. In addition to these environmental benefits, adaptation of the historic fabric in contemporary projects promotes robust dialogue with cultural traditions.

These seven residential projects across the Middle East and North Africa draw from a variety of regional traditions, from Mediterranean style homes in Jaffa and Hammamet to mud brick in the high desert of Iran. Together, they show how longstanding architectural ideas can be fused with modern renovation techniques to create stunning, site-sensitive homes. 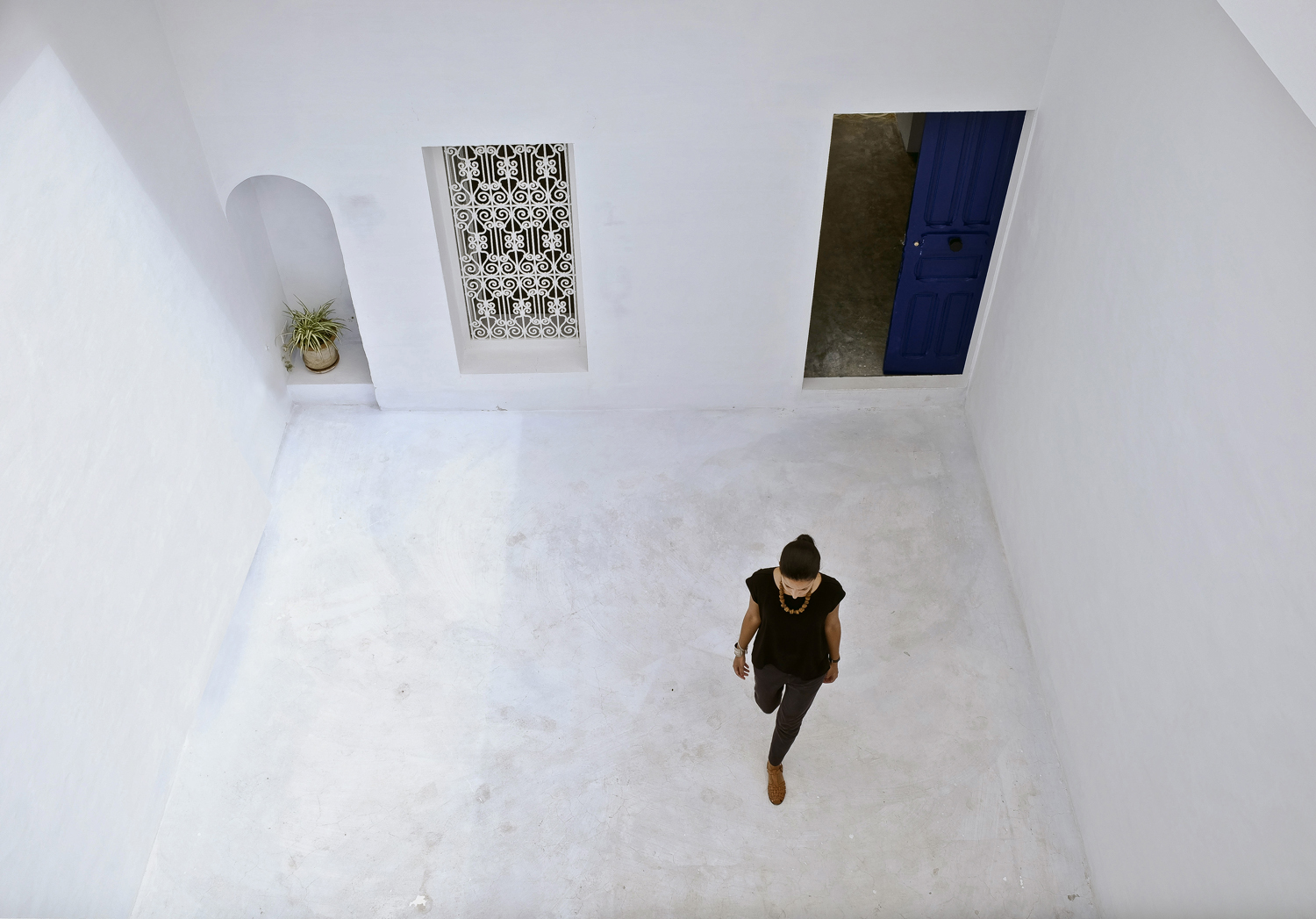 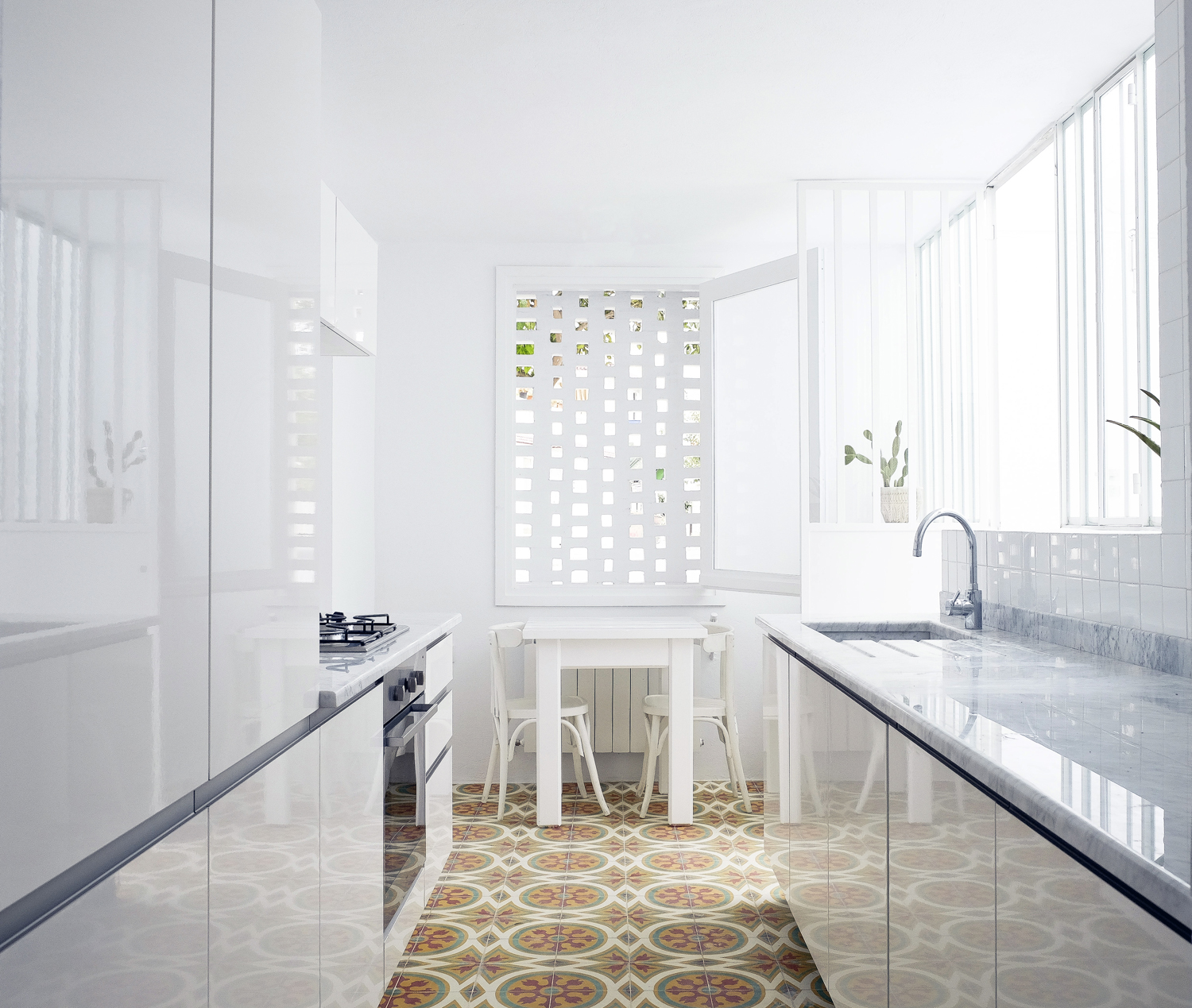 To keep cool during intense Mediterranean summers, many historic structures in Tunisia are coated in a thick layer of white lime plaster. This monochromatic approach increases their albedo—the percentage of the sun’s rays that a surface reflects. Septembre architects’ renovation of a two-courtyard home in the coastal resort city of Hammamet played off of this tradition, taking the traditional white color throughout the home.

With unicolor doors, shutters, and walls, small flashes of color inside such as verdant cacti and kitchen tiles especially stand out. Artistic vents, reminiscent of Josef Albers’ sculptures, are composed of stacked bricks and improve internal air flow. However, the renovation did not just aesthetically honor tradition, local artisans crafted the metalwork and plaster that visually connect the house to its surrounding neighborhood. 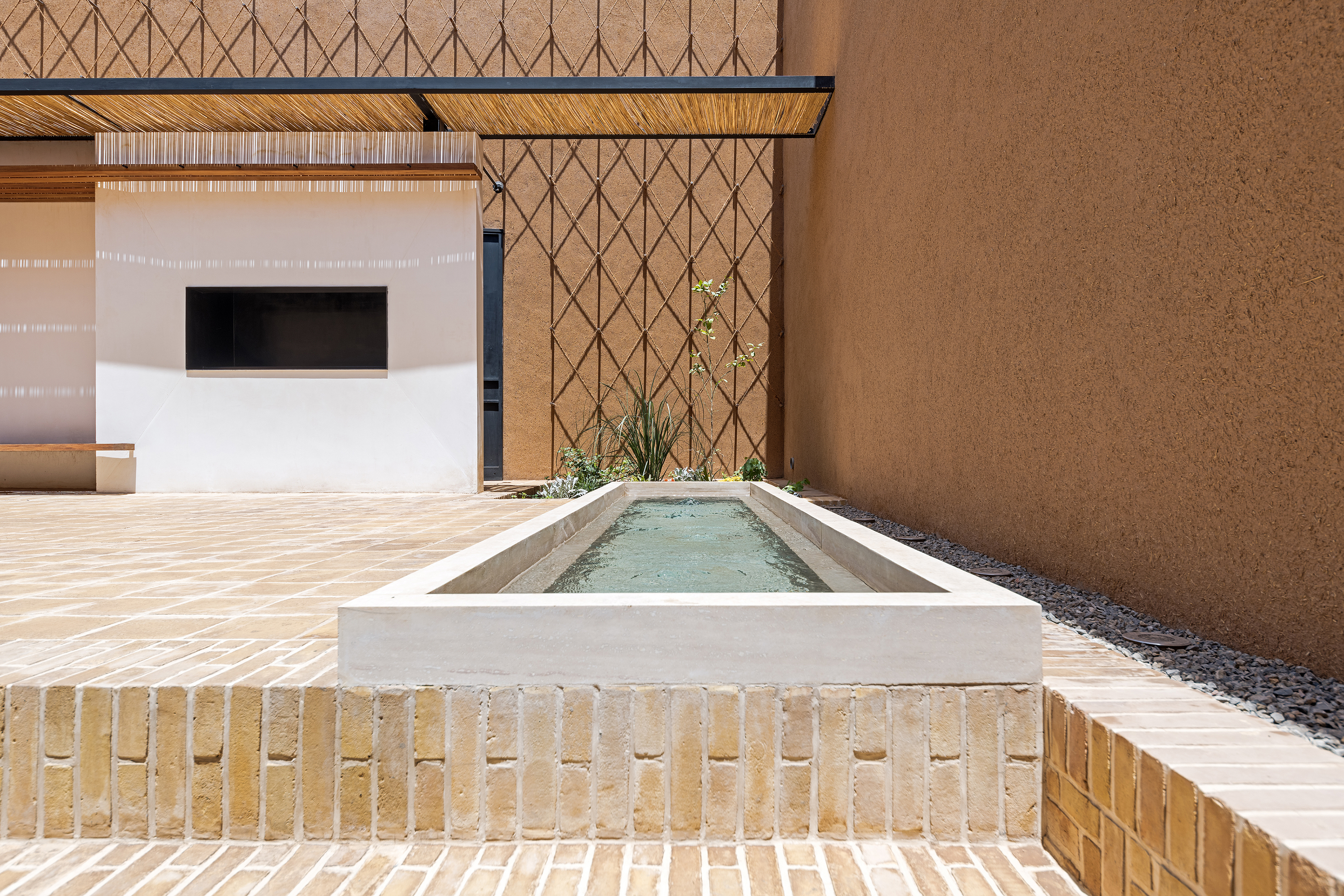 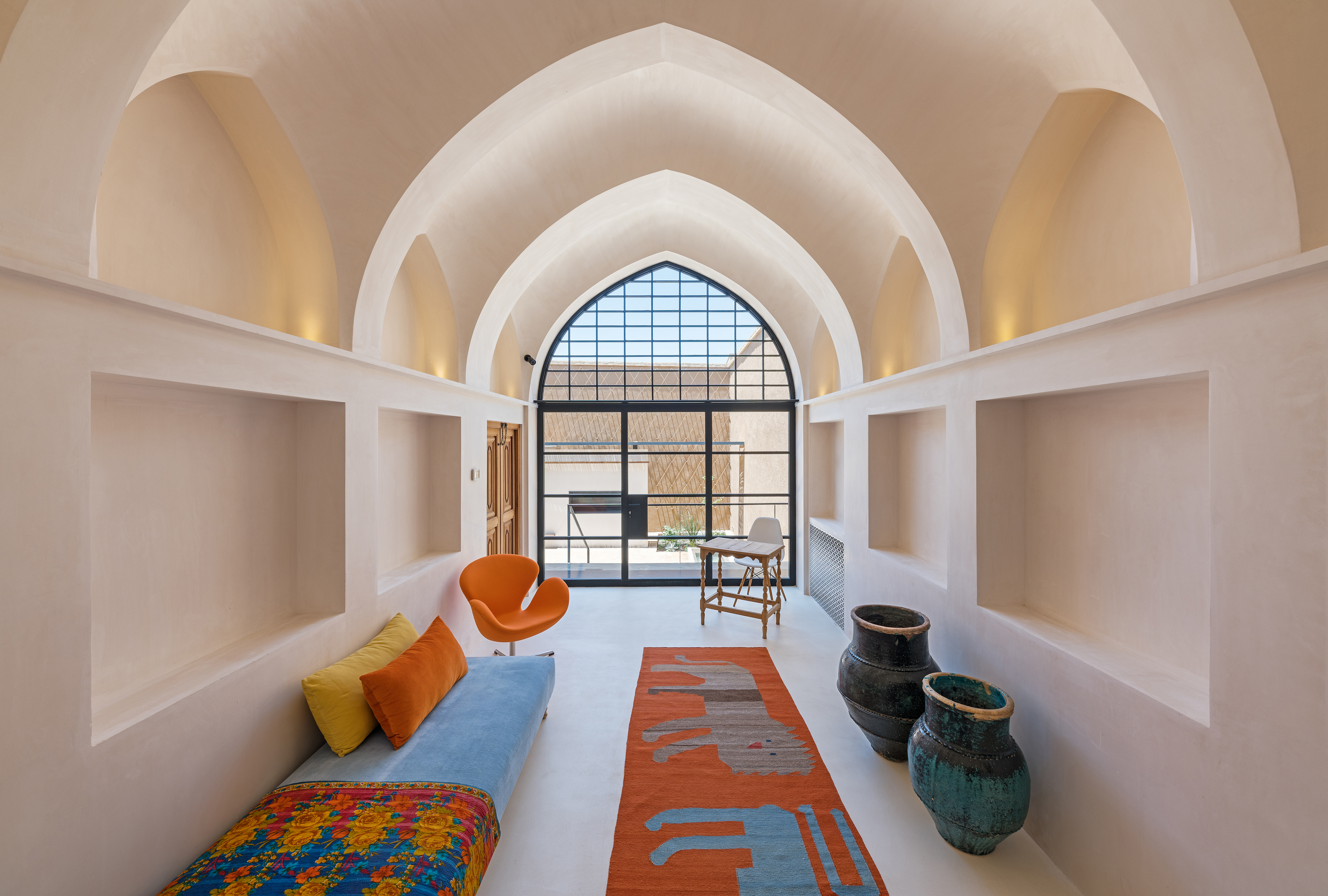 The city of Kashan is renowned for its stunning mud brick architecture and Saadat Historic House is no exception. The 140-year-old structure was recently renovated by Parisa Manouchehri Design to serve as the headquarters for a local NGO that works to preserve historic architecture and hosts a similarly aligned research center.

While features of the original home, such as its three gardens and fountains, were maintained, other parts of the structure needed adaptation to meet its new purpose. Stables were converted into guest and research spaces with exposed glass and metal and vaulted iwans were repurposed as meeting rooms. The renovation masterfully reworked a collapsing space for the noble goal of preserving the city’s historic architecture. 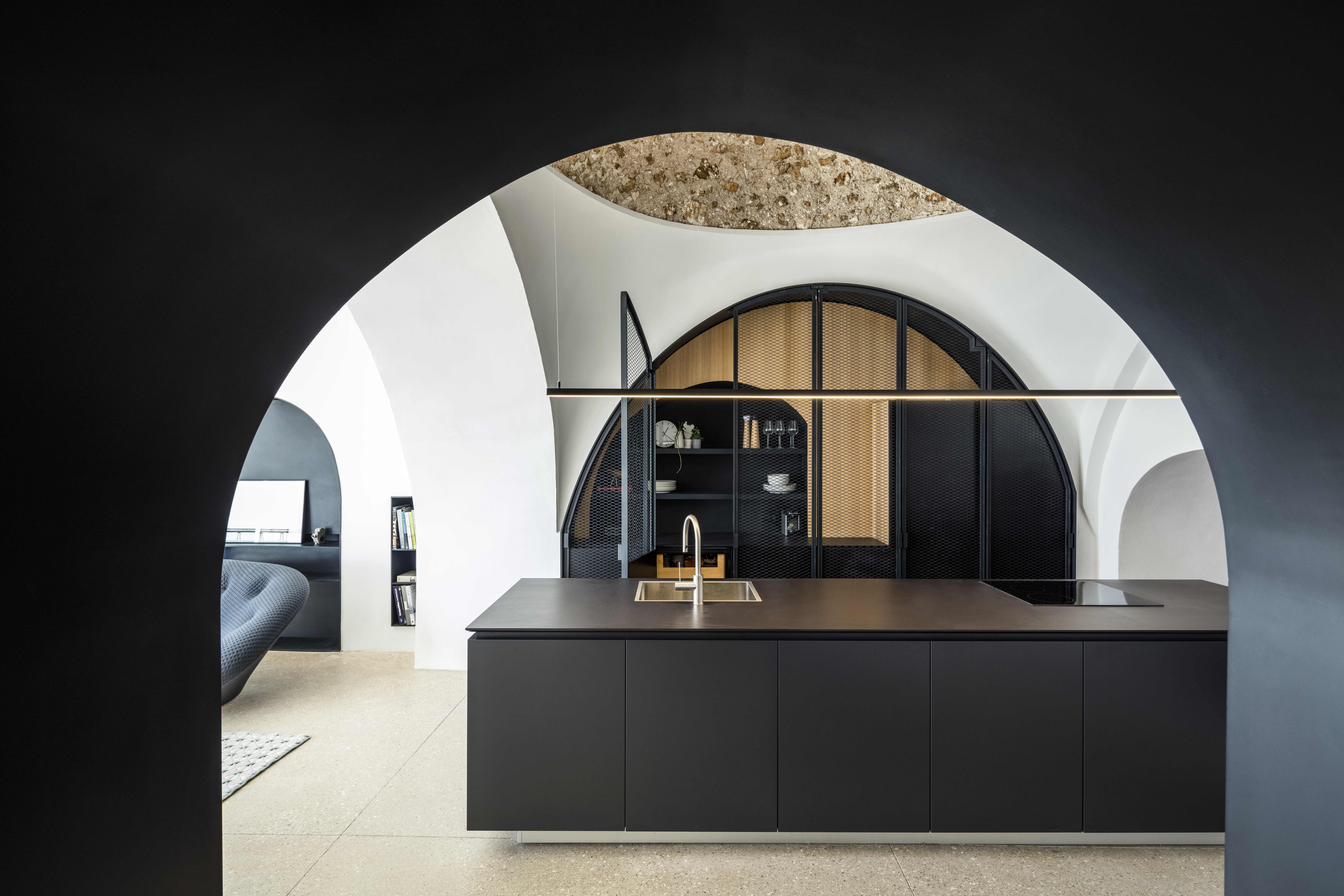 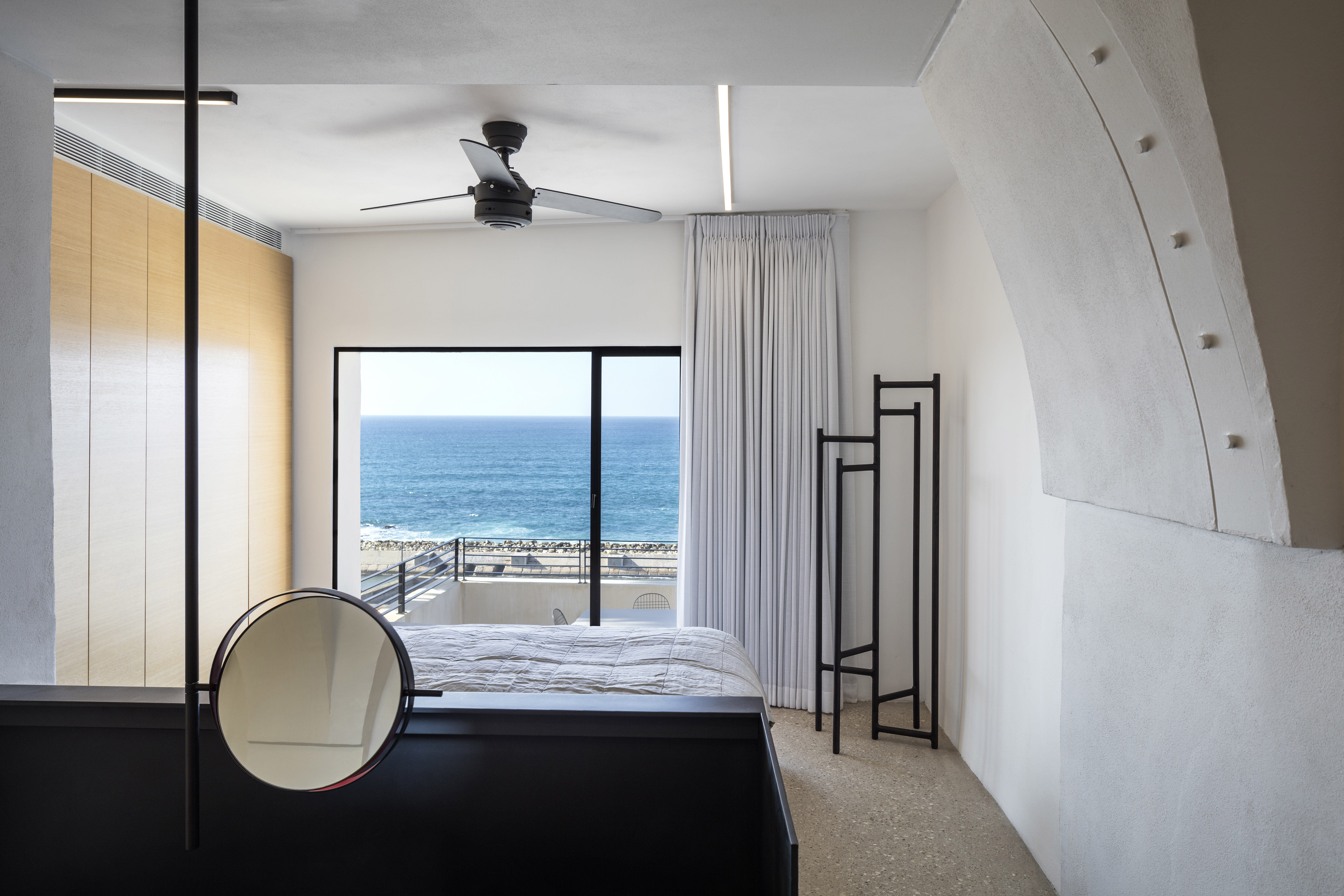 Facing the sea in Old Jaffa, a historic city known for its oranges, Modern Cave preserves the domed forms of the original structure. An organic process of additions over time is reflected in the apartment’s unique floor plan. Stunning views of the Mediterranean and contemporary finishes, such as matte black arches, set the space apart. Although the project is part of a wave of efforts aimed at valorizing Jaffa’s historic architecture, it also raises questions about the role of modern architects in the city’s gentrification that has disproportionately affected Palestinian residents. 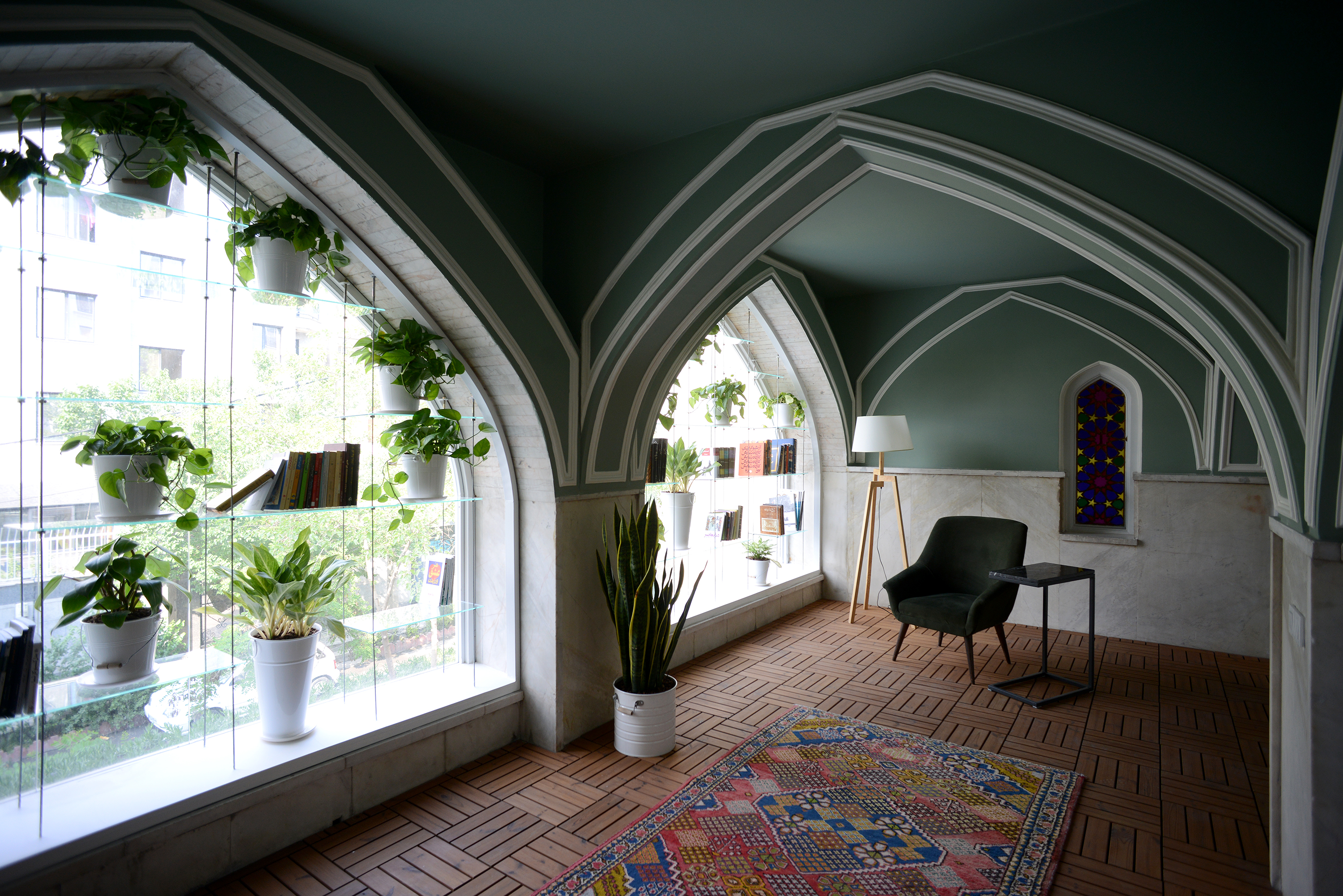 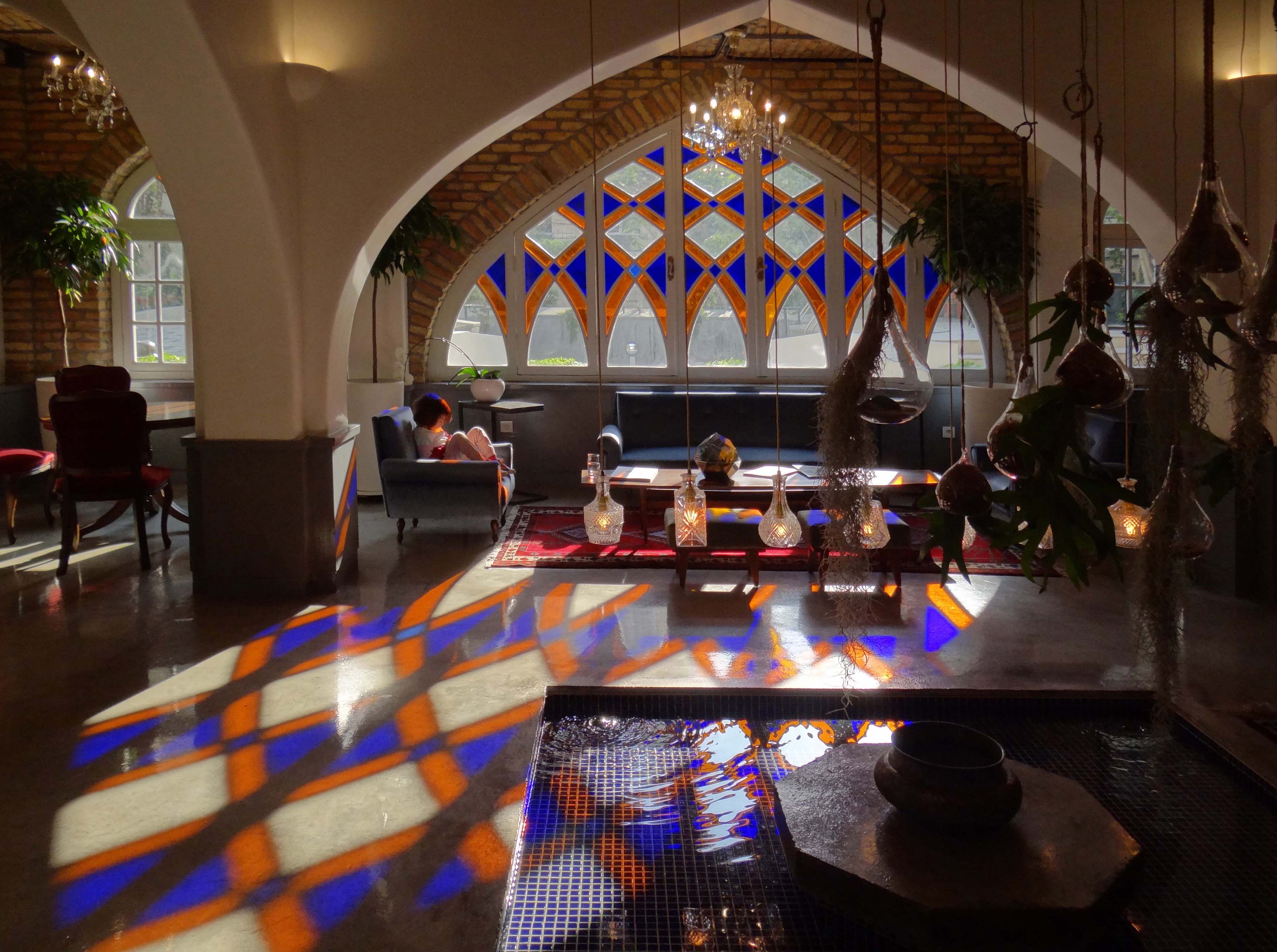 In the first project of its kind in Iran, Studio Davazdah renovated a historic mansion into a business club house. The project combines the elegance of the former private residence with the necessities of a clubhouse: the caretaker’s room became a café, a terrace converted to a members’ library, and the boiler room transformed into a common space for employees. Fountains and colored glass are hallmarks of the space, scattering light throughout the expansive interior. Original golden-hued bricks on the ceiling and walls are left exposed.

A late 19th century building constructed by a prominent French furniture-maker in the historic Galata quarter of Istanbul was updated as an apartment by Cenova Mimarlık / GALATA YAPI. The space has glorious original ceiling frescoes in faded shades of pink and red that are complemented by the elongated traditional windows. Contemporary features such as the exposed utilities and metal doorframes give the space an updated feel. 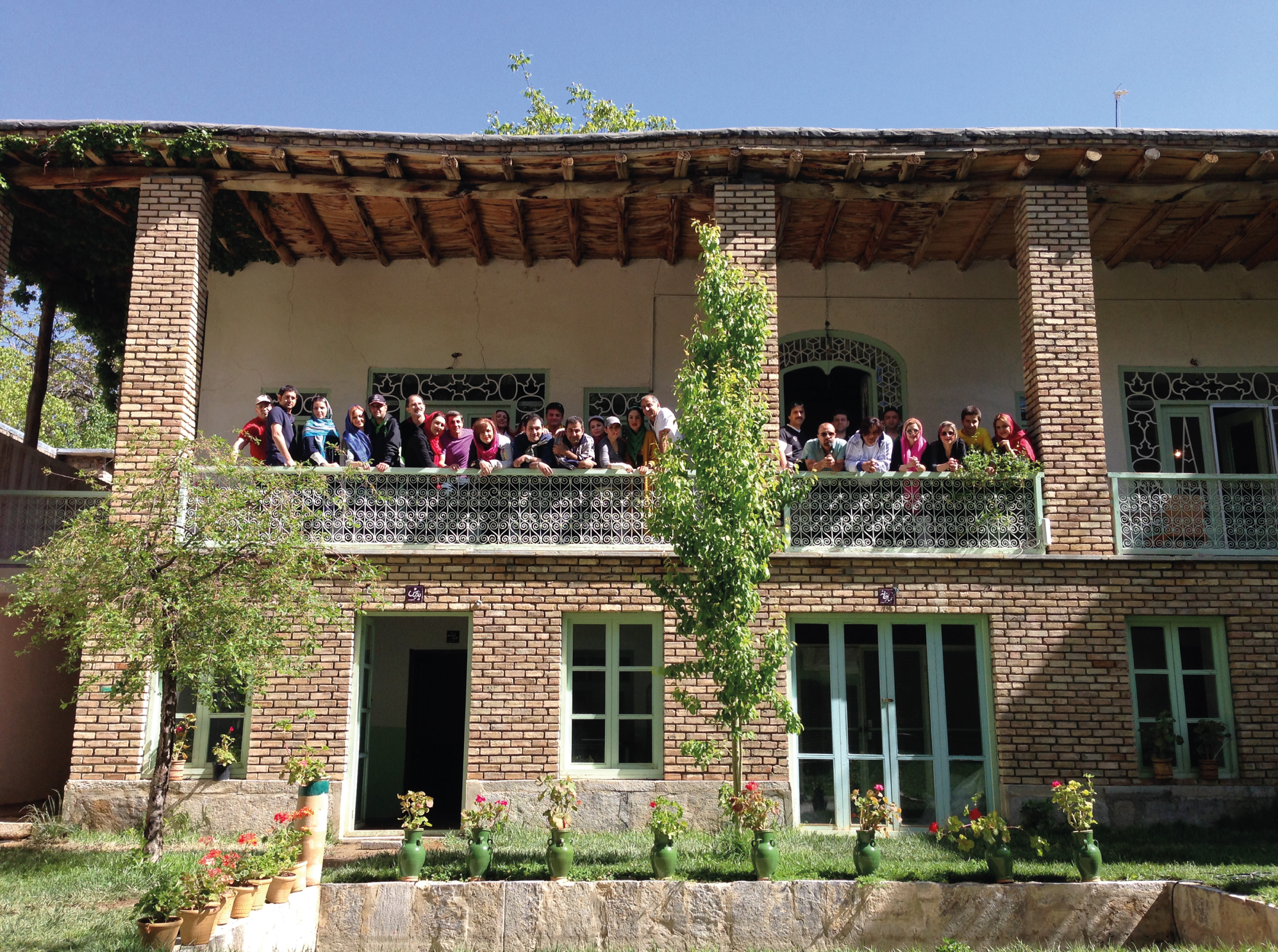 The goal of Pedari Guest House is to create a center that promotes social sustainability in the burgeoning local eco-tourism industry. In support of this, local craftsmen were used in all steps of the process and reclaimed materials from demolished historic buildings were applied in the renovation of the extant guest house. Traditional features such as a small pool are combined with updated design elements such as asymmetric pavers in the garden. A new building perpendicular to the old home mirrors its boxy forms and provides ample space for guests. 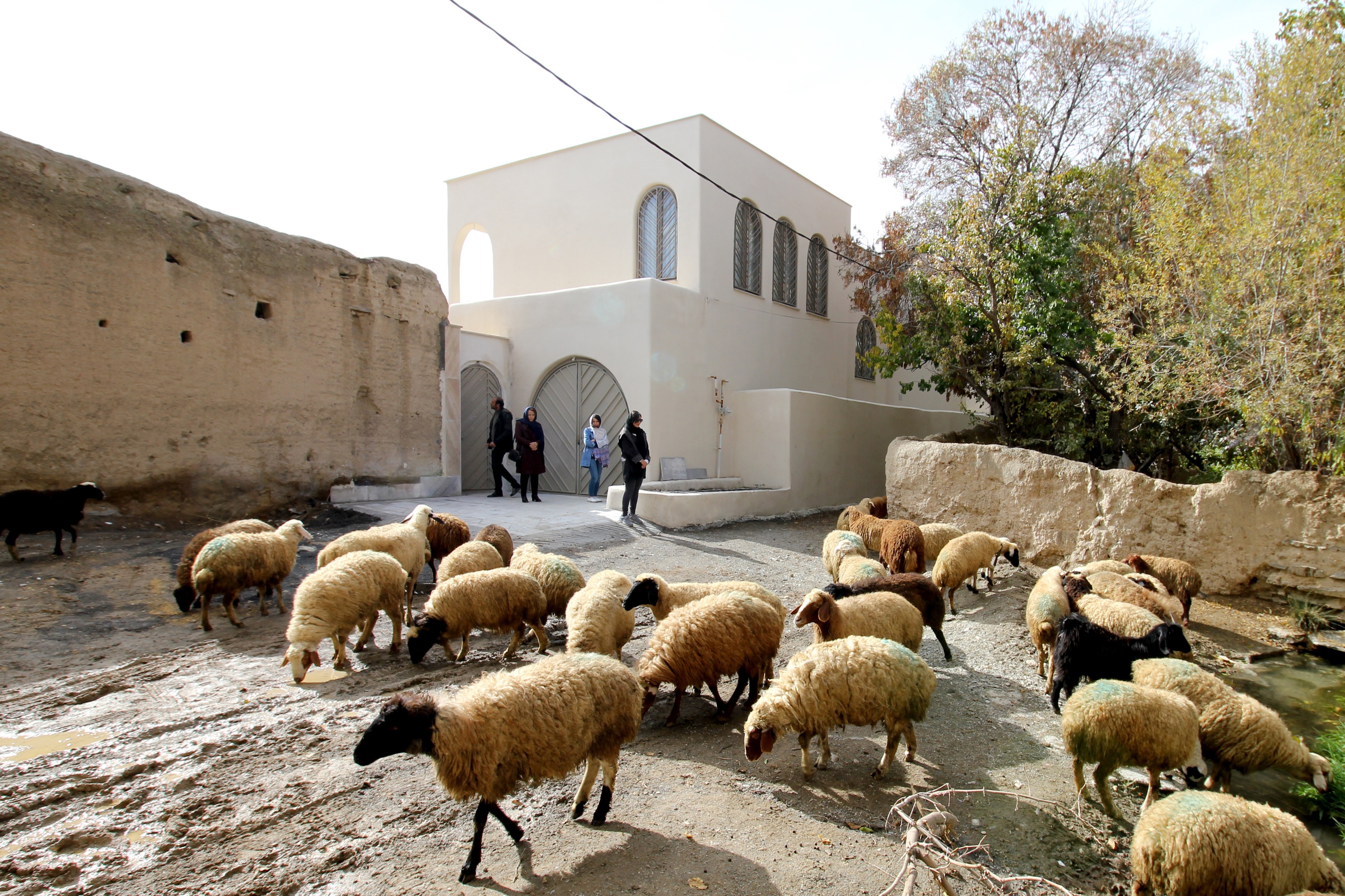 Jafariha House was built as a weekend respite for a Tehran family that wanted to maintain strong connections with their roots in rural Sian Village. In order to design an extension and restoration that would harmonize with the rest of the village, the architects studied the historic architecture of the nearby area. The most prominent design element is the arched window motif, retreated on each side of the residence. Angular forms also link the intervention to the traditional forms of the village’s mud brick construction.