The winners of Architizer's Fourth Annual One Drawing Challenge have been revealed! Interested in next year's program? Subscribe to our newsletter for updates.

Great stadium design brings people together and celebrates public life. These large buildings not only become landmarks within a city but also explore new approaches to structure and technology. In modern stadium design, engineering and architecture go hand-in-hand. From a field and seating to the roof overhead, the designs demand attention to views, light and circulation. Today, architects are exploring how to take these impressive structures to new heights.

One of the key ways to understand stadiums is through section drawings. As a window into the spectator experience, they represent how we move through space and open up sight lines to the sport at play. Diving into these drawings through recently built stadiums worldwide, the following projects showcase sports design today. From cantilevered forms to fully enclosed structures, they represent long-span solutions and innovative roof design. 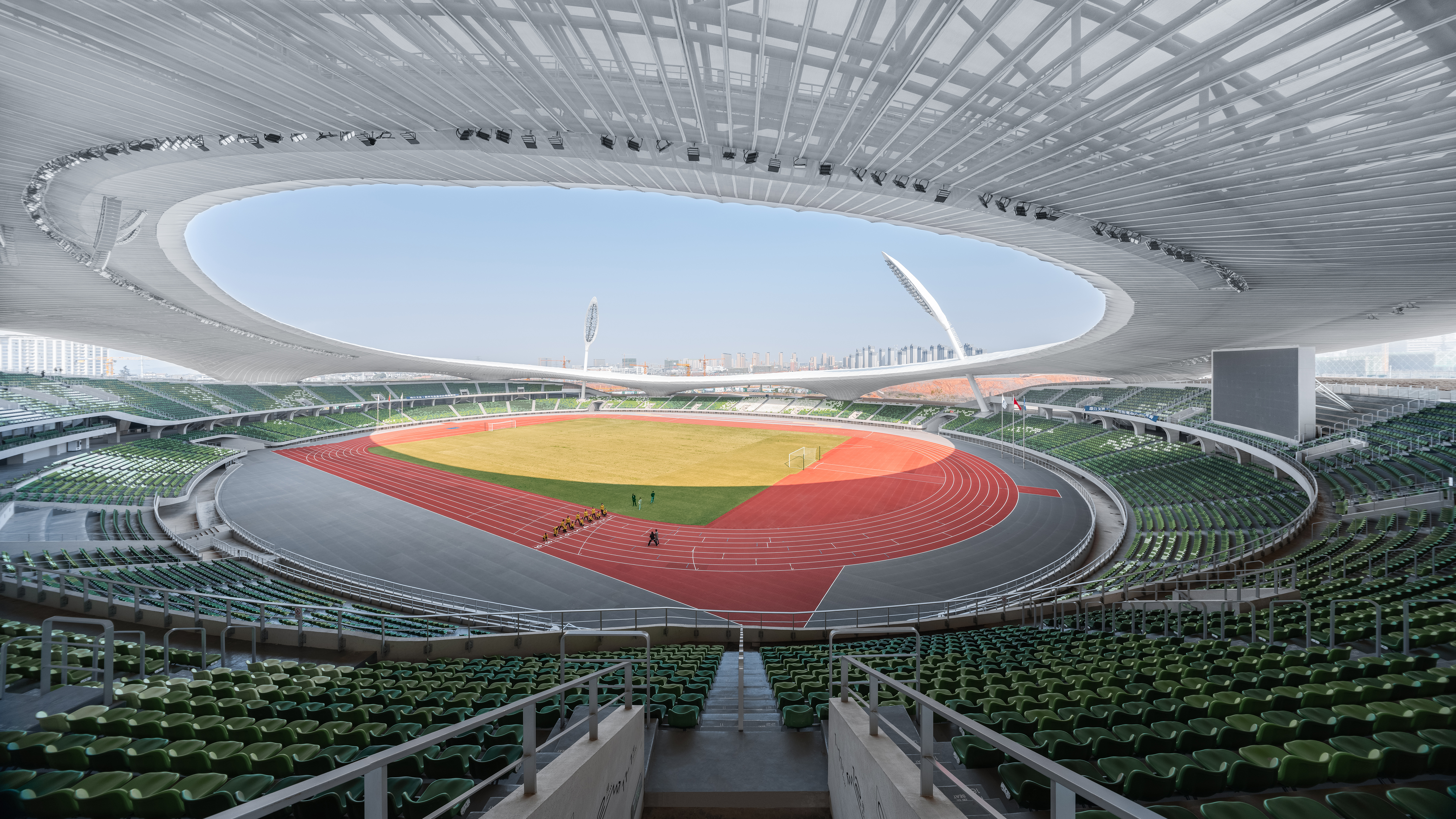 Quzhou Stadium was designed as “land art” that submerges itself into a futuristic landscape of hills, sunken gardens and a lake. The stadium is part of the 700,000-square-meter sports park that also consists of a gymnasium, with a natatorium, sports hall, and outdoor sports venues. The design is crowned by a translucent, long-span ‘halo’ that gently hovers above like a cloud. The halo’s proximity to the earth makes it seemingly close yet untouchable, triggering an illusion of tension between earth and sky. 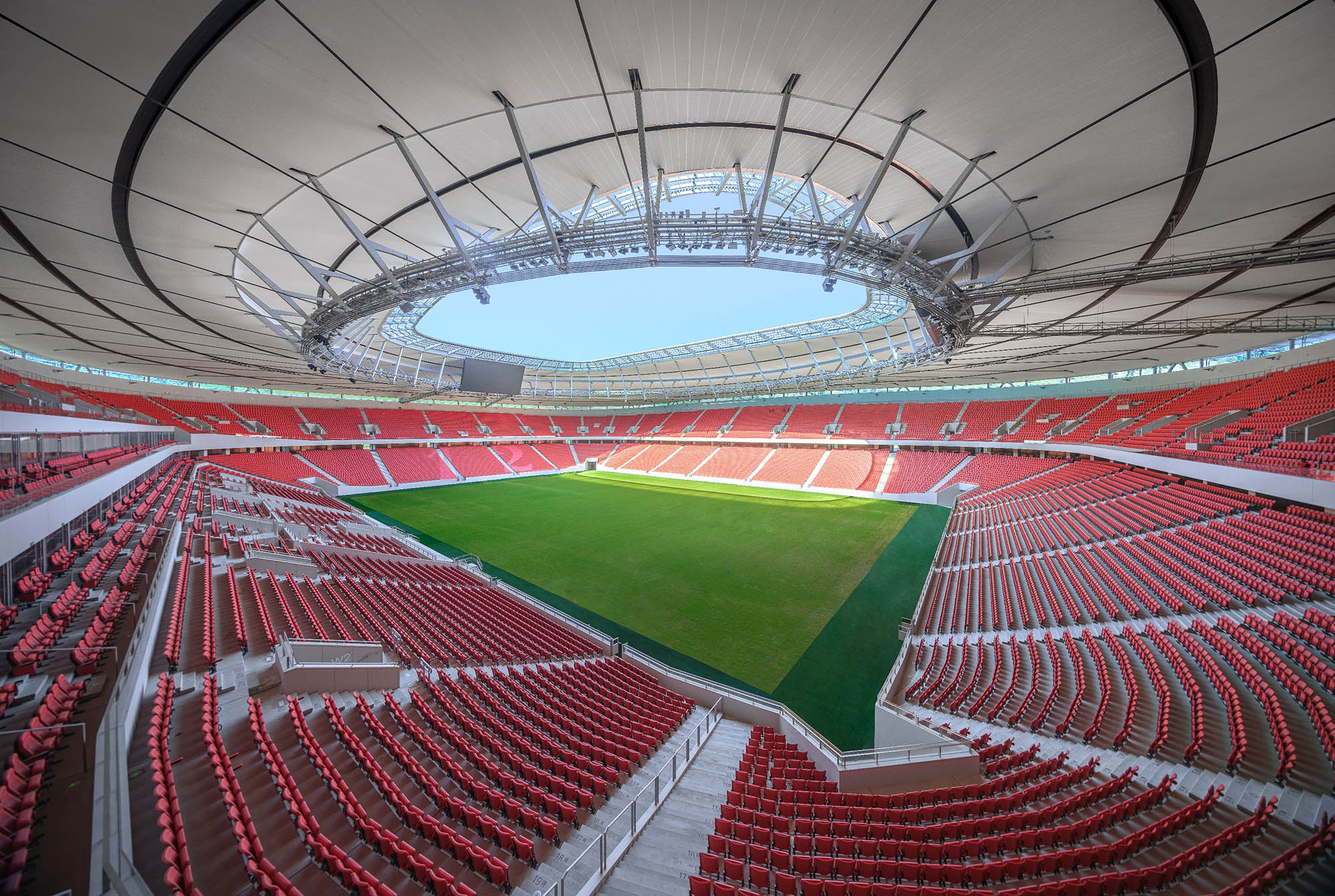 The SAIC Motor Pudong Arena is the new home ground of professional football association Shanghai Port FC and is the first football stadium in China to meet the international standards of world football association FIFA. HPP designed the shape of the stadium to resemble a bowl made of traditional Chinese porcelain. The stadium’s flat roof functions as an internal tension ring and external compression ring, following the principles of suspension cable construction. This technique, used here for the first time anywhere in the world, forms an support-free interior space spanning 56 meters (183 feet) from roof edge to central opening. 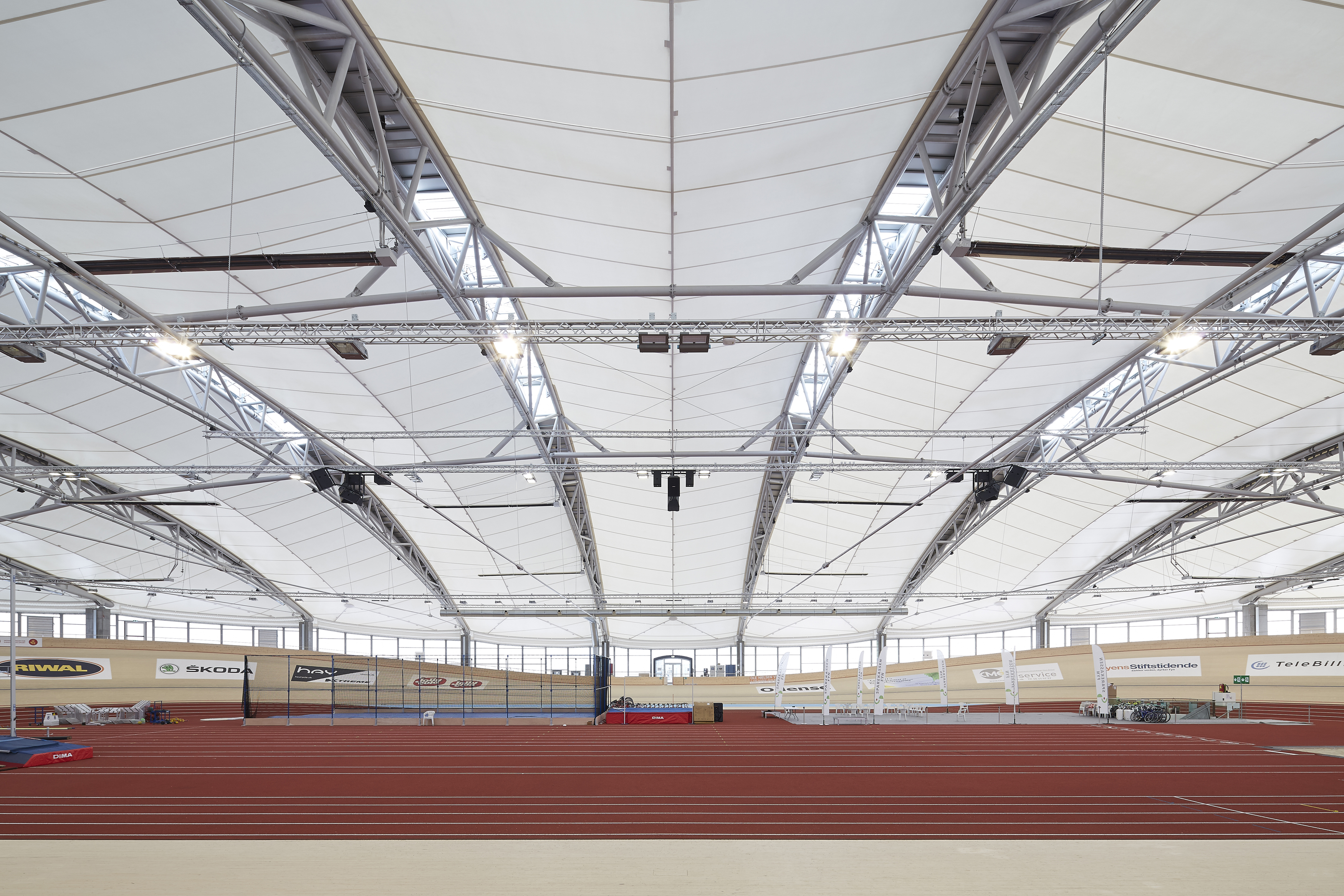 Located west of Odense city center, this project includes an enclosure of a 250 meter (820 foot) long cycle track, as well as establishing a new timber cycle track in combination with a running track and field event facilities in the central area. The biggest challenge with regard to the structural design was the need to design a structure that can span over a large column-free area while being both the lightest and most structurally and economically effective solution. As a result, the team used a membrane structure in combination with a supporting structure of steel. 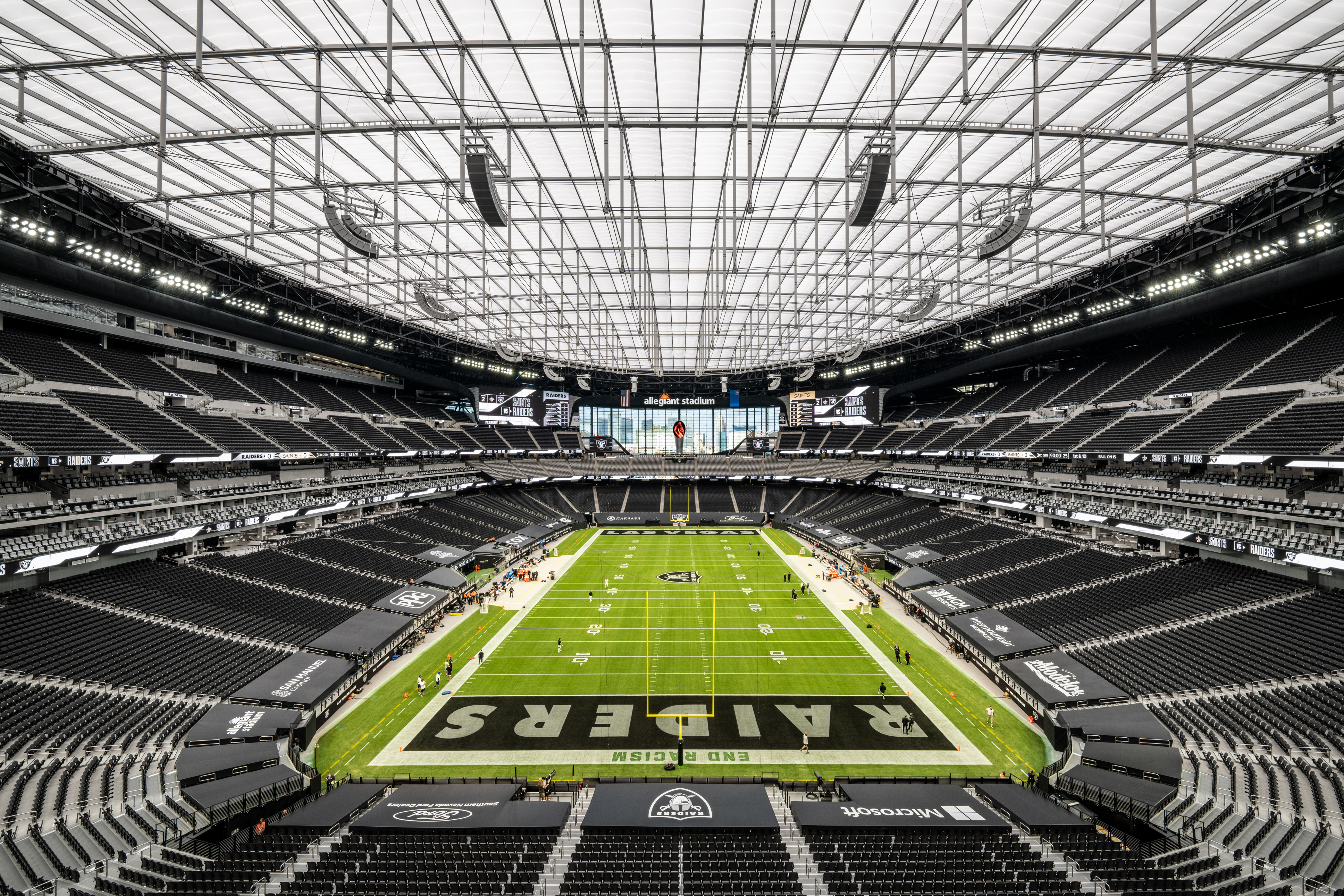 Allegiant Stadium is the home for the NFL’s Las Vegas Raiders and the NCAA’s UNLV Rebels. The fully enclosed and climate-controlled multi-purpose venue can expand to 72,000 seats for major events. The stadium’s exterior is inspired by the distinctive lines of a luxury sports car. The design features a 200-foot-wide (60 meter) column-free zone made possible by a hi-tech cable net and ETFE roofing system.

ZHA’s architectural concept of the London Aquatics Centre was inspired by the fluid geometry of water in motion, creating spaces and a surrounding environment in sympathy with the river landscape of the Olympic Park. An undulating roof sweeps up from the ground as a wave, enclosing the centrally placed pools with its unifying gesture of fluidity. At the same tie, the structure serves as a metaphor that references the volume of the swimming and diving pools. The London Aquatics Centre was designed to have the flexibility to accommodate the size and capacity of the London 2012 Olympic Games whilst also providing the optimum size and capacity for use in Legacy mode after the 2012 Games. 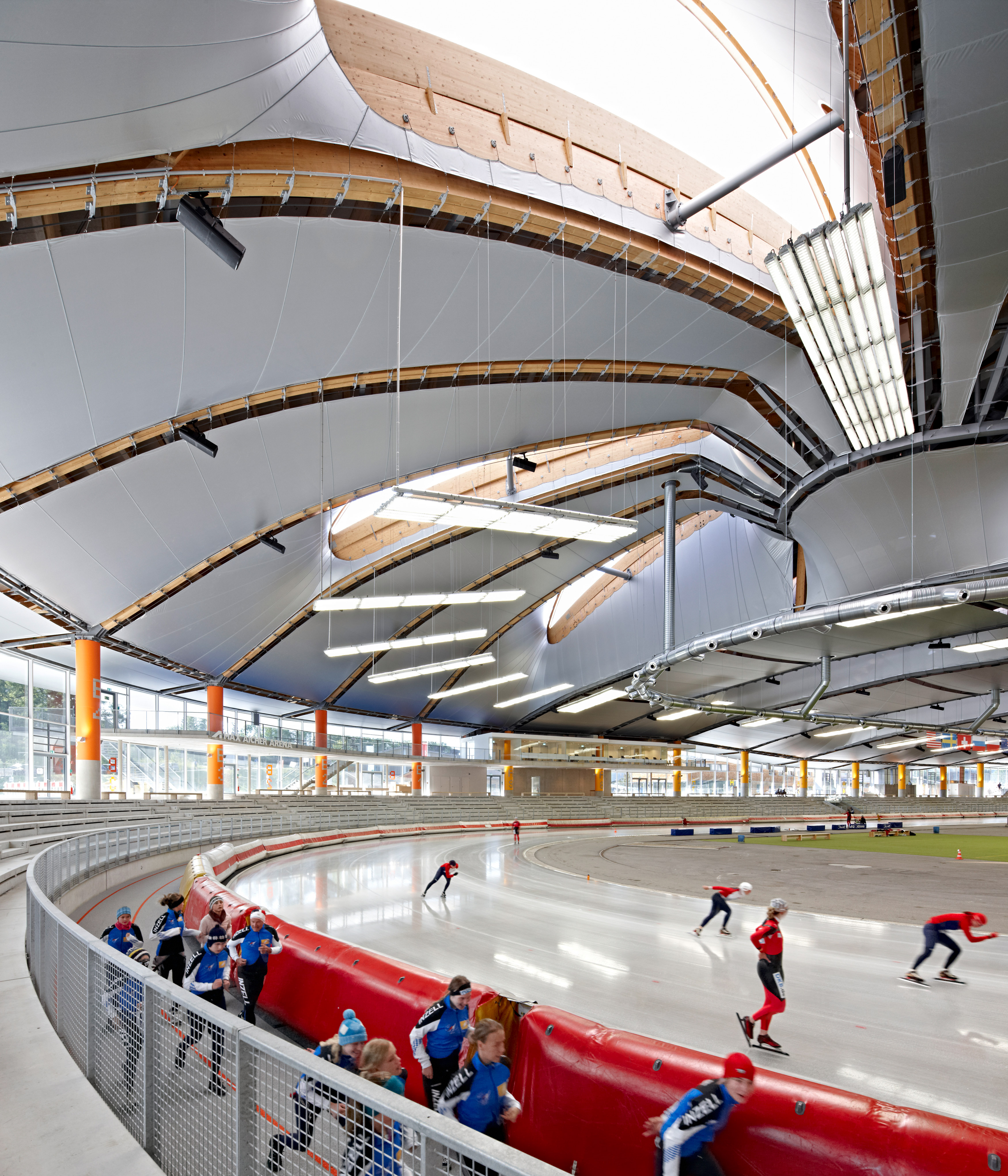 Inzell hosted the World Single Distant Speed Skating Championships 2011. The existing outdoor speed-skating track was upgraded through the construction of a high-performance intelligent roof structure. This improved arena can accommodate up to 7,000 spectators and offers flexibility for large scale world class competitions as well as regular seasonal speed-skating training. The 200 meter (655 foot) long and 90 meter (295 feet) wide arena was planned as an independent wide-span structure, free of interior columns. 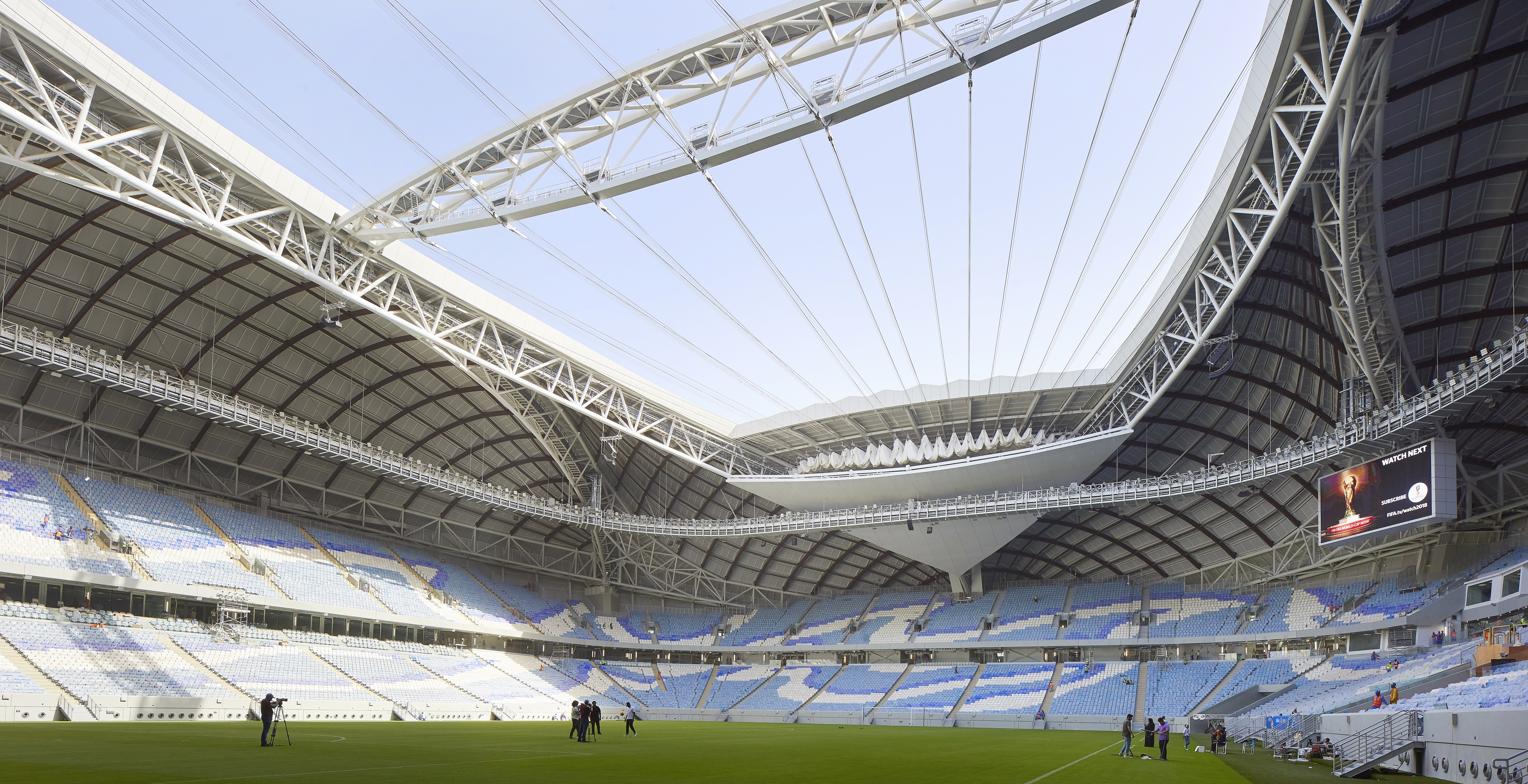 Al Janoub Stadium was the first new venue commissioned in 2013 for the 2022 FIFA World Cup in Qatar. The stadium has an operable fabric roof and cooling technologies. When deployed, the roof operates like a sail to shade the field of play. The client asked the design reflect Al Wakrah’s maritime heritage, in particular, the dhow — a traditional boat of the region. The stadium’s roof design is an abstraction of the hulls of dhows turned upside-down and huddled together to provide shade and shelter.

The winners of Architizer's Fourth Annual One Drawing Challenge have been revealed! Interested in next year's program? Subscribe to our newsletter for updates.

Author: Eric Baldwin
Eric Baldwin is the Firmwide Communications Manager for Perkins&Will. Based in New York City, he was trained in both architecture and communications with a background spanning media, academia, and practice. He is deeply committed to trying as many restaurants as possible in NYC.
Read more articles by Eric
Trending Articles