For its 11th season, Architizer has created a suite of sustainability-focused A+Awards recognizing designers working toward a better future. Start your submission today.

Coastal resiliency projects explore the intersection of waterfronts and urban life. Across the world, architects are taking a critical look at how contemporary cities are evolving alongside the environment. Coastal cities will fundamentally change in the coming years, facing threats from rising seas and climate change that will shape urban life. Now designers are working with policymakers and planners to reimagine a more resilient future. In turn, these iconic structures and distinct landscapes are made to embrace the world’s oceans.

There is an increasing need for designers to actively reshape the coastal cities of tomorrow. With disasters becoming more and more commonplace, smarter and more resilient urban strategies are needed. These projects are sited at the intersection of diverse disciplines, drawing together aspects and qualities of landscape, architecture, planning, and ecology. But if designers are going to raise awareness of environmental conditions and how cities can work with larger processes, they must also turn their attention to public space. Taking a survey of work from across the world, the following coastal resiliency projects rethink the places we gather and discover amid cultural and natural confluences. 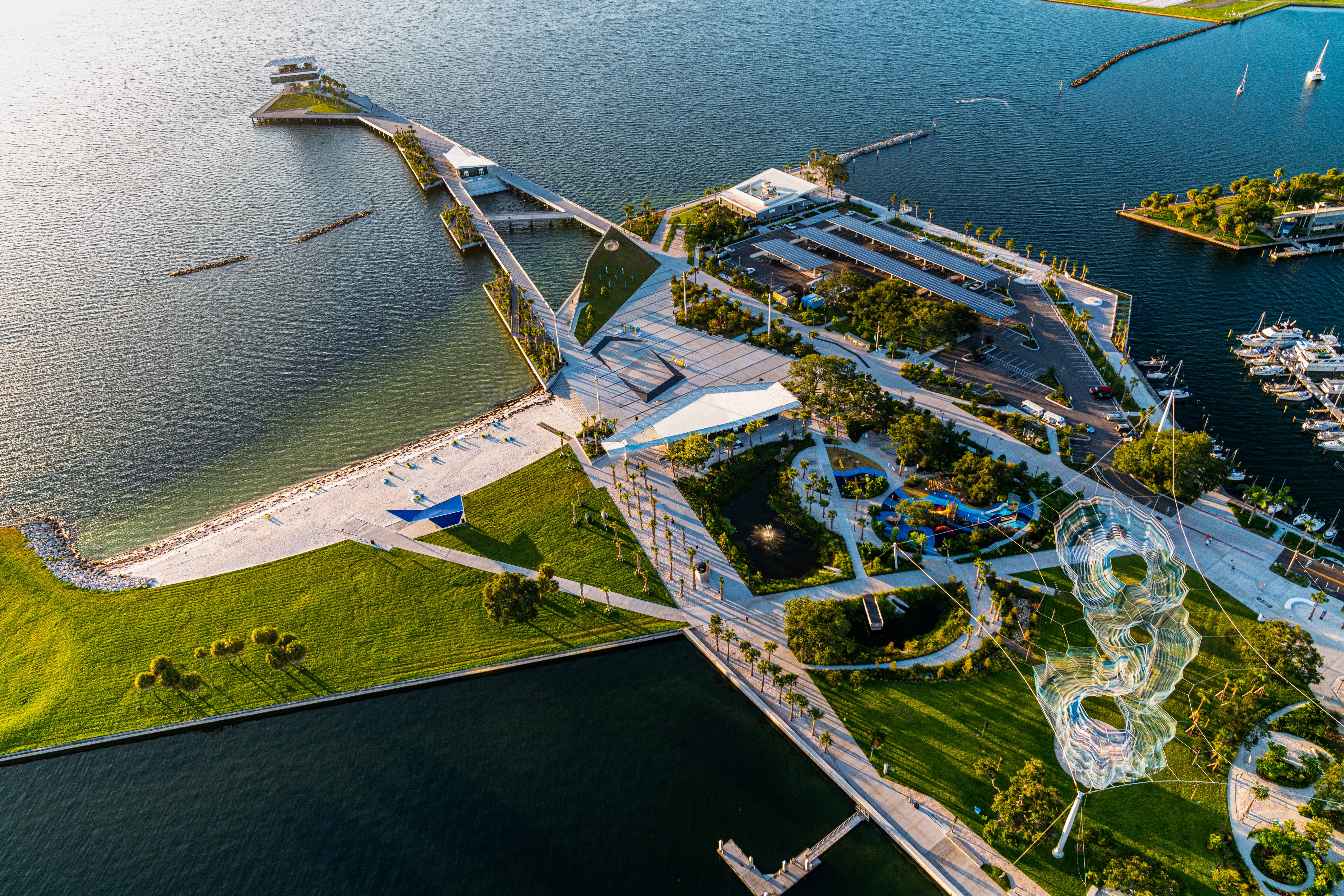 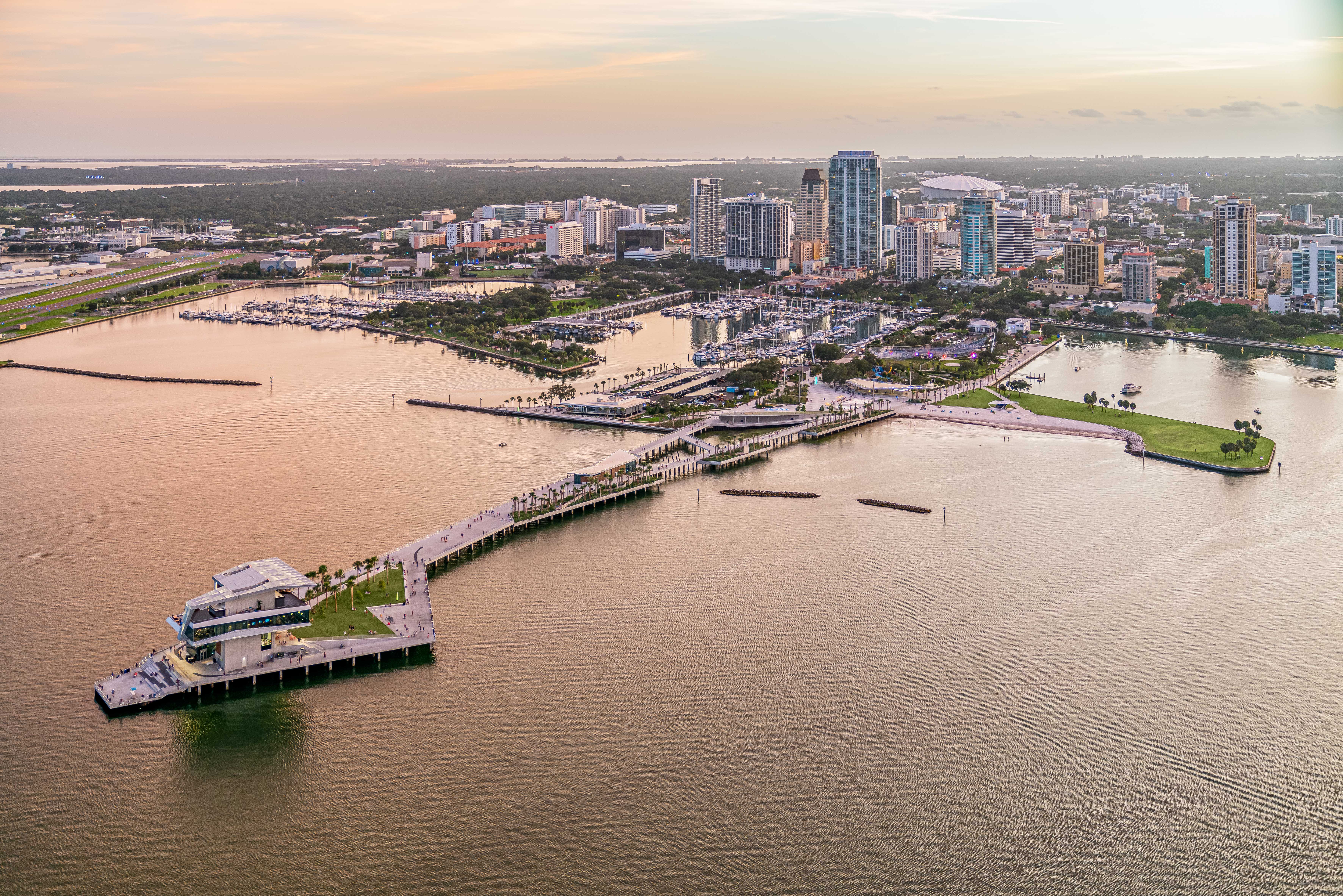 The St. Pete Pier is both an investment in equitable open space and a catalyst for economic development. The project replaces an aging structure with a new, dynamic public landscape. By leveraging programming for a layered set of users and improving public transportation and resiliency infrastructure, the project energizes the city’s downtown revitalization and anchors a larger district development strategy. The design establishes a topography of art installations, playgrounds, food and drink options, shopping areas, and other amenities that appeal to children, retirees, families, tourists and young professionals. 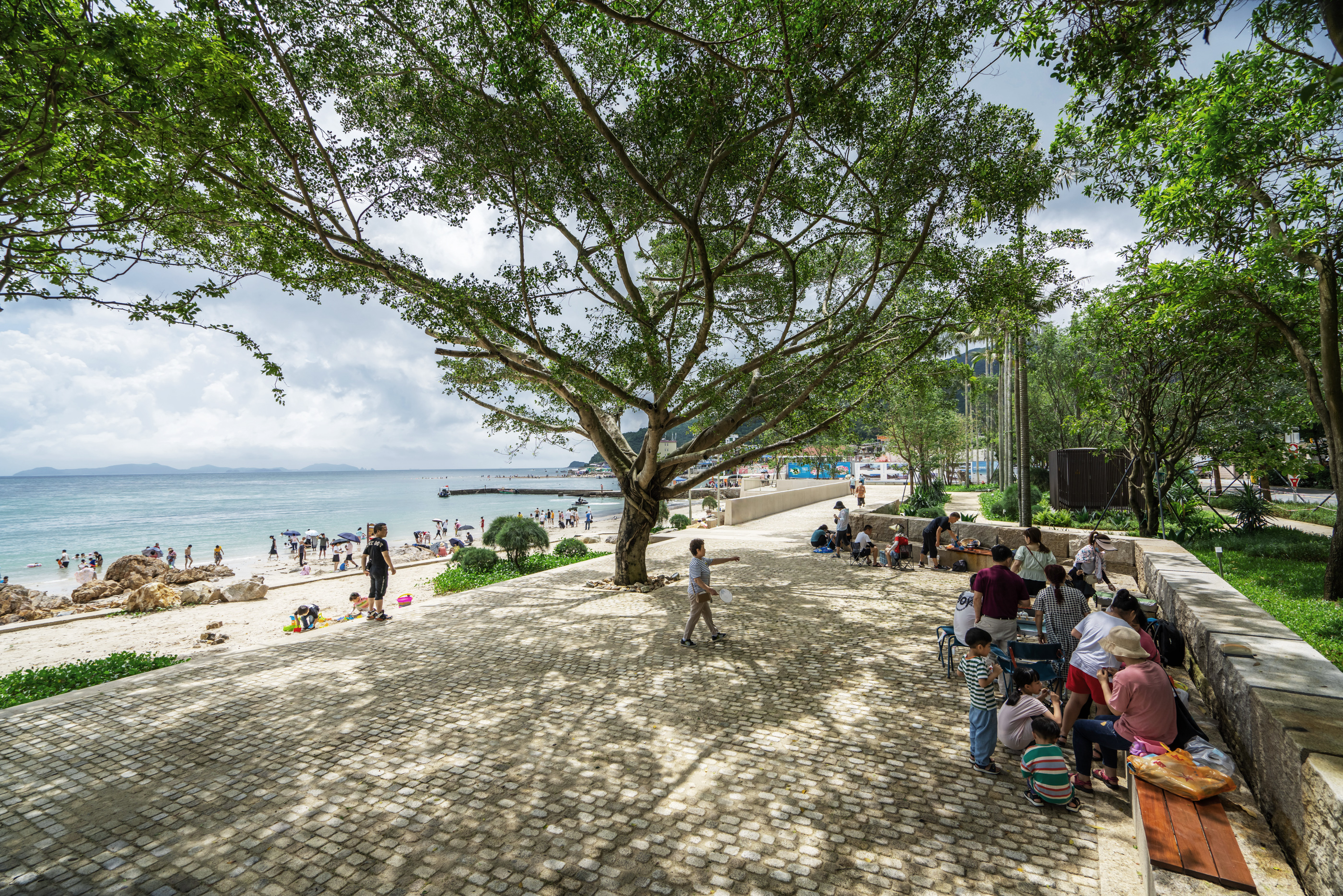 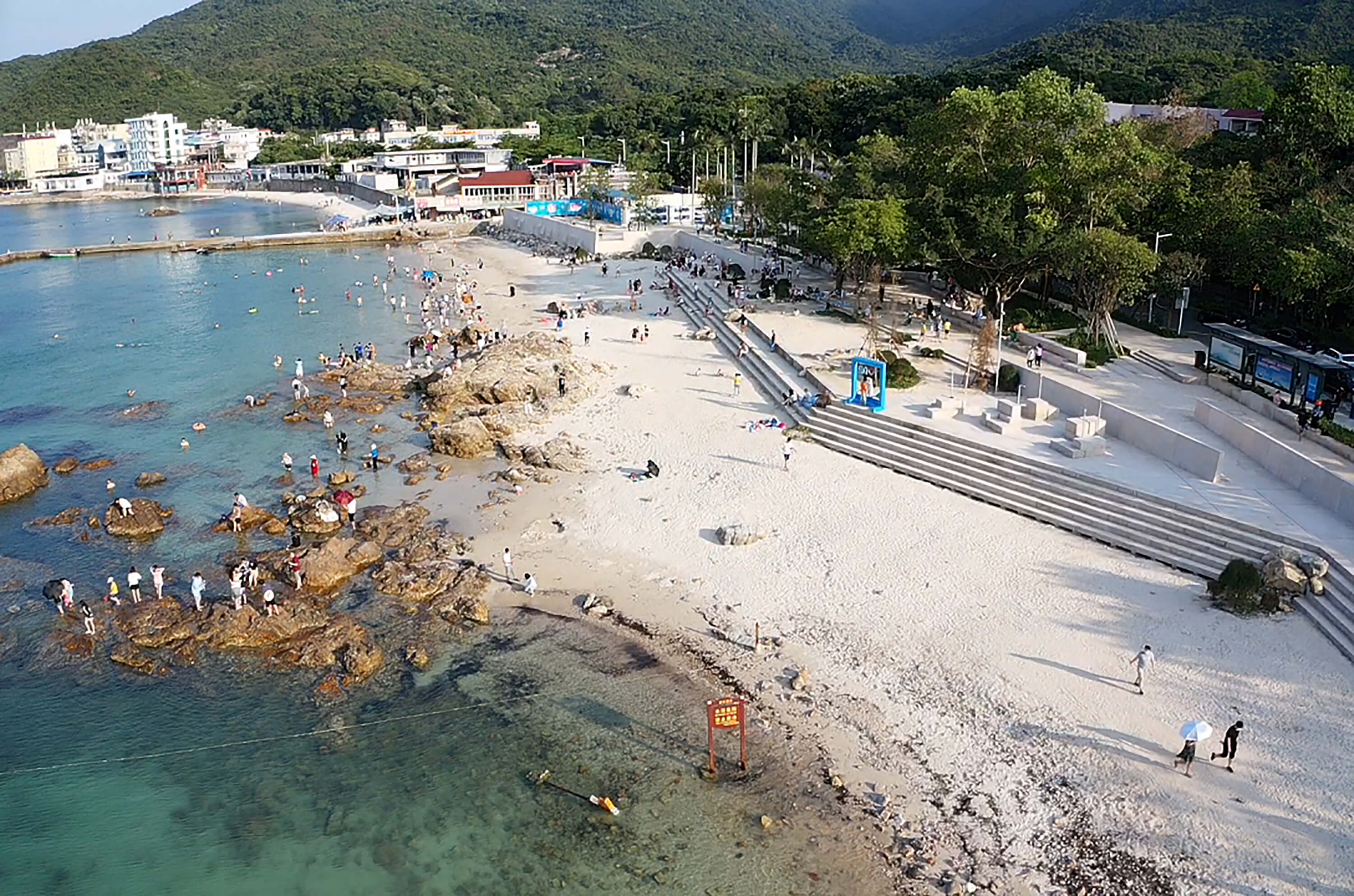 Dapeng is a natural green peninsula with a 130km shoreline stretched around it, located in the bay between Hongkong and Shenzhen. In September 2018, the typhoon Mangkhut damaged the infrastructure of the peninsula to various degrees. An international competition was launched to develop a plan to restore the coastline and raise protection standards against the more frequent occurrence of extreme weather events. KCAP+FELIXX developed the ‘Triple dike strategy’, a multifaceted dike system that allows for an integrated approach towards the climate adaptive reorganization of the shore. 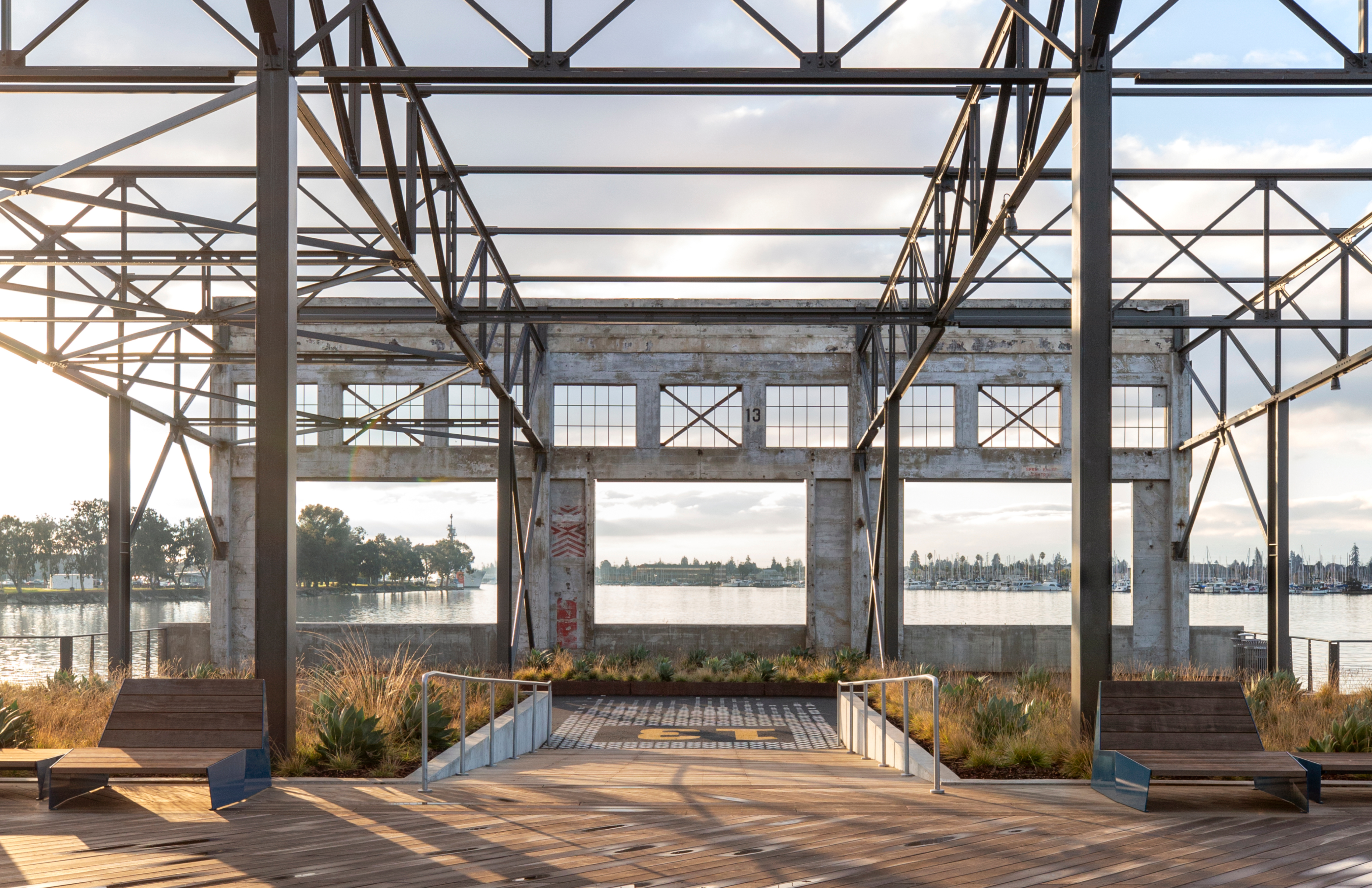 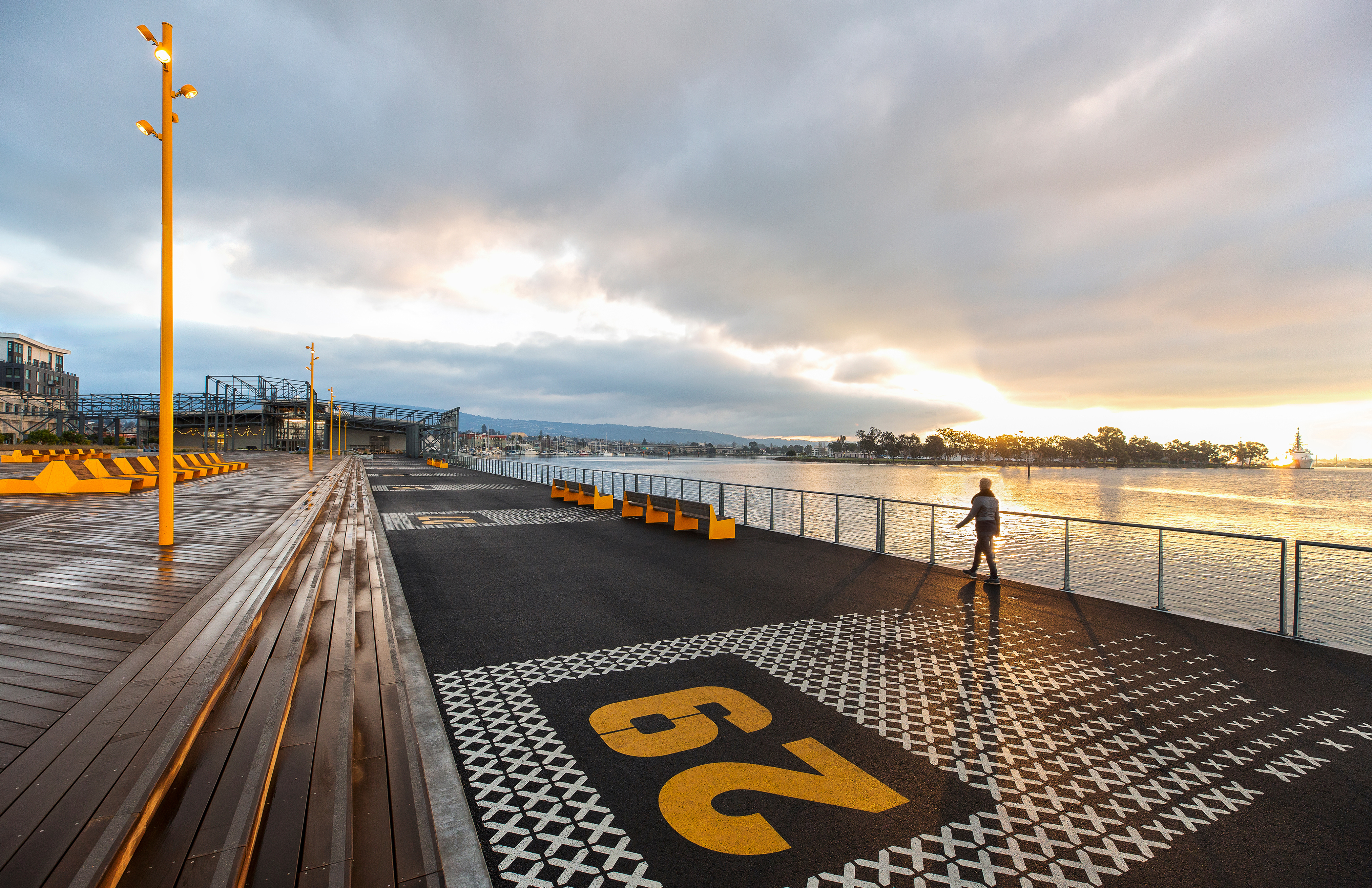 This new park welcomes Oakland residents back to their waterfront with a bold and brave definition of a park. An adaptive re-use conceived with a radical imagination, the park is located within the footprint of the former 9th Avenue terminal and is inspired by the shipping history as well as the natural history of the site. Select building elements including walls, trusses and the imprint of loading dock geometry are preserved in the new design but are transformed to inspire and allow for new uses — including the creation of containers of coastal, drought- tolerant plants. The design celebrates movement, evoking the past movements of shipping history of the trains, trucks, ships and workers that exchanged goods at this site.

Alongside building the required coastal defense, the coast zone investments also ensure that Katwijk remains a tourist destination and supporting the local economy of seaside towns. With the need to strengthen the Katwijk coast, care is taken to preserve the value of the existing town and, ultimately, how this can also be made stronger. In an interactive planning process OKRA defined the most important values ​​of Katwijk; namely the relationship between the village and the beach. The chosen dyke-in-dune coastal approach layers in resiliency with an extensive network of paths built to connect village and beach, offering views of the sea. 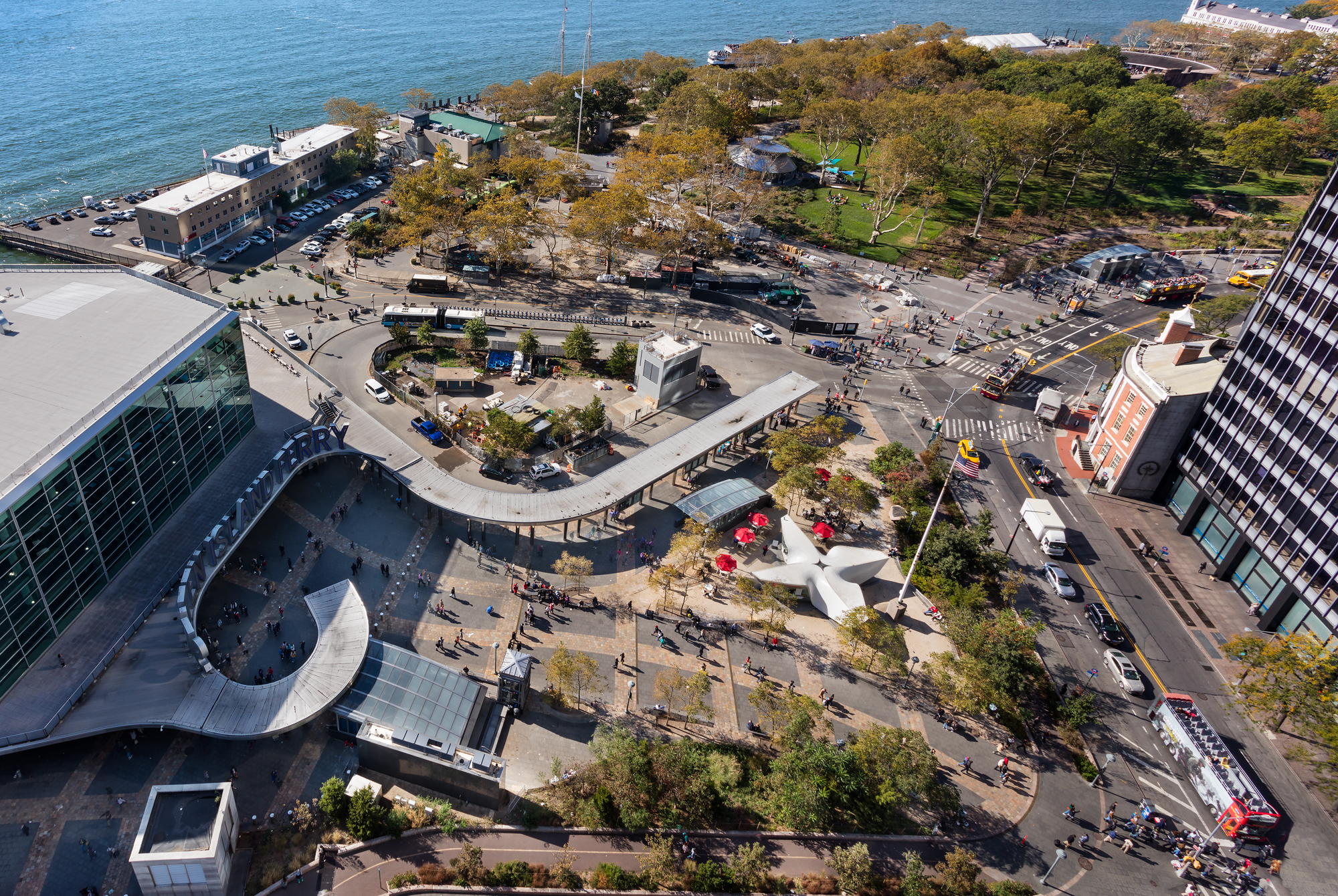 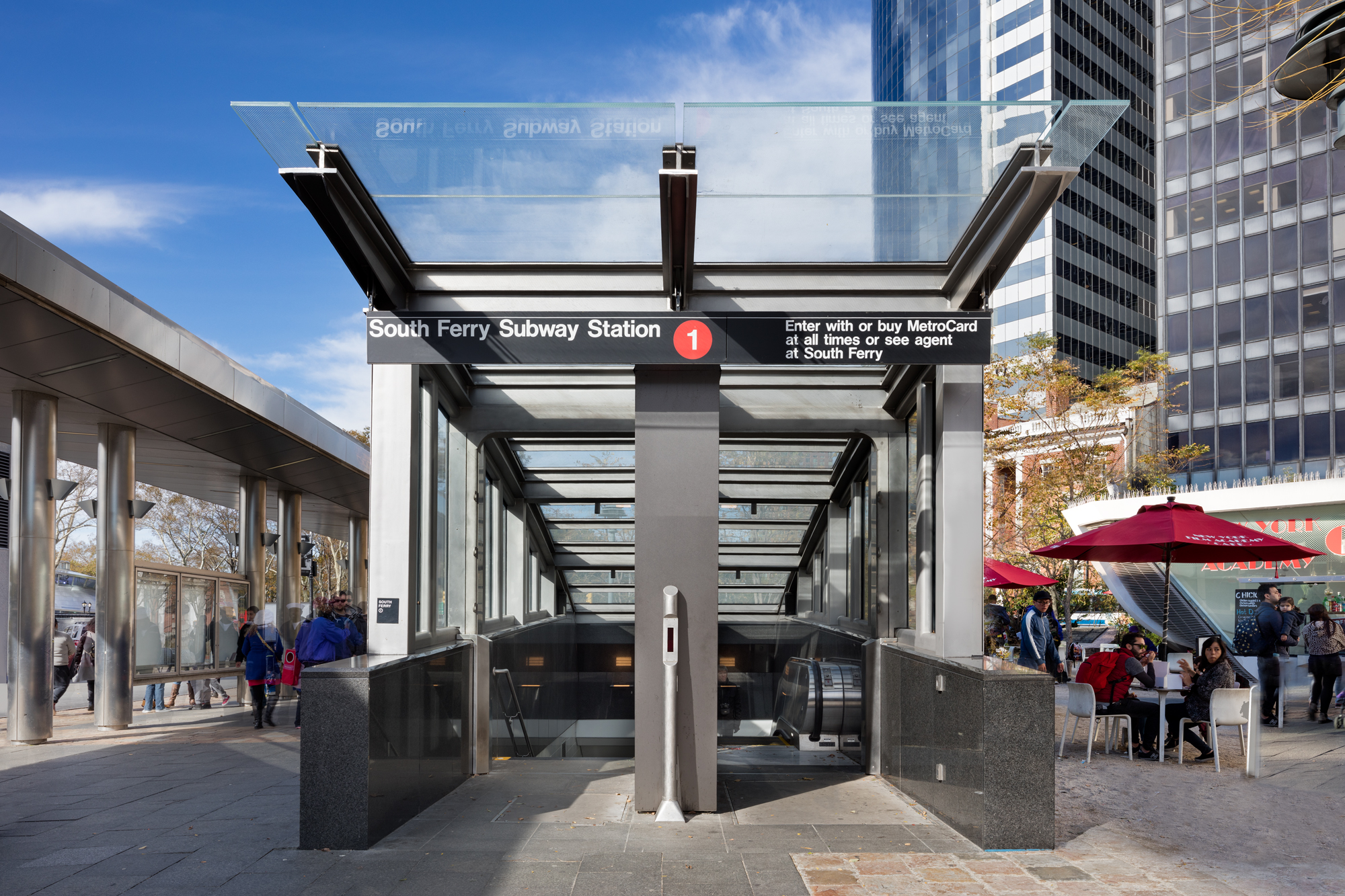 Designed in the wake of Hurricane Sandy’s devastation, this mitigation project looked at how the storm affected the New York City Transit subways at an unprecedented magnitude. Particularly affected were downtown Manhattan facilities in low-lying areas. The scope of work at South Ferry Station is divided into station rehabilitation and flood protection. For station rehabilitation, di Domenico + Partners conducted an architectural assessment that included all concourse, mezzanine and platform levels, employee facilities and back-of-house spaces ,as well as mechanical and electrical rooms throughout the station complex. For flood protection and resiliency, the assessment focused on street-level entrances, ventilation structures, hatches, manholes and critical spaces throughout the station complex 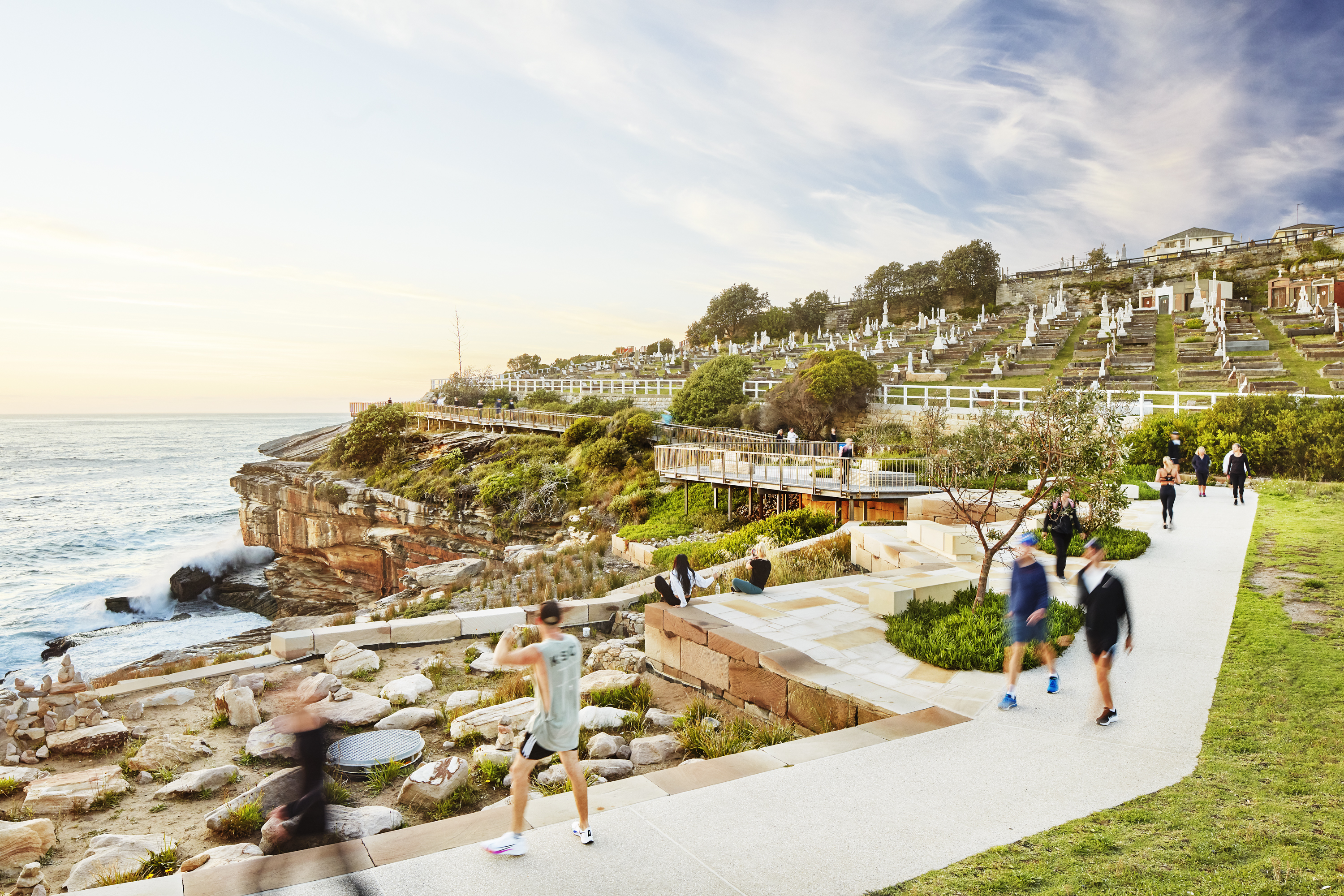 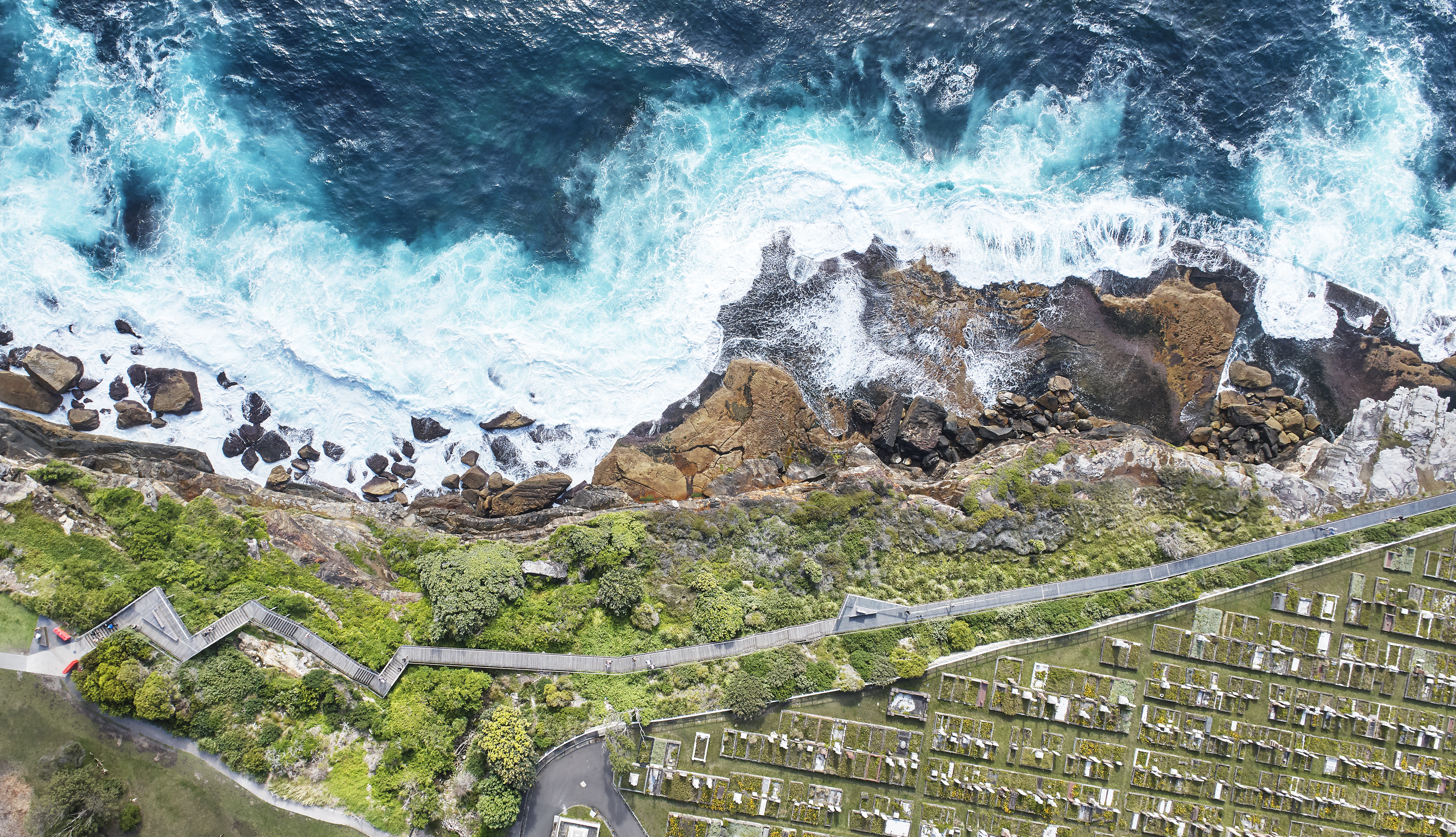 The Bondi to Bronte Coastal Walk was reimagined to rethink, redevelop and restore the famous track, also home to the heritage listed Waverley Cemetery. ASPECT Studios was tasked with designing and documenting the new extension, building on the successful clifftop walk completed just over 10 years ago. The project involved constructing an elevated boardwalk that resolves complex geotechnical, structural and heritage conditions. The 515m long walkway is part of the nationally significant 9km coastal walk from South head to Maroubra, located above Sydney’s Eastern cliff tops. It is in equal parts a ribbon of movement though the sublime eastern cliff top landscape and a place to stop and embrace the experience of this unique cultural, environmental and heritage landscape.

For its 11th season, Architizer has created a suite of sustainability-focused A+Awards recognizing designers working toward a better future. Start your submission today.