Architizer is thrilled to announce the winners of the 10th Annual A+Awards! Want to earn global recognition for your projects? Sign up to be notified when the 11th Annual A+Awards program launches.

Cultural architecture is defined by human experience. As places of gathering and exchange, cultural facilities bring people together. These projects are made to connect us to larger ideas and each other. From museums to theaters and libraries, cultural projects reflect contemporary life. As places to socialize, civic architecture also becomes landmarks and icons. In turn, these monumental works rethink how culture is shared and celebrated.

The firms redefining cultural architecture are boldly looking to the future of design. Whether expanding the formal, spatial or experiential potential of architecture, they each implement new ideas on construction and craft, as well as human connection. Great cultural buildings around the world are designed to emphasize a collective past and values. So too do each of the following firms expand traditional ideas and techniques by reinterpreting history. The result is cultural architecture that resonates with people and place.

Adjaye Associates describes itself as a practice stimulated and nurtured by the broadest possible perspective and curiosity. When founder Sir David Adjaye and his team saw their design for the National Museum of African American History and Culture completed on the Mall in Washington D.C., it marked a seminal moment for a firm that has experienced a meteoric rise over the past decade. Named of the 2017 A+Awards Firm of the Year, Adjaye Associates bridges cultural architecture with critical design. 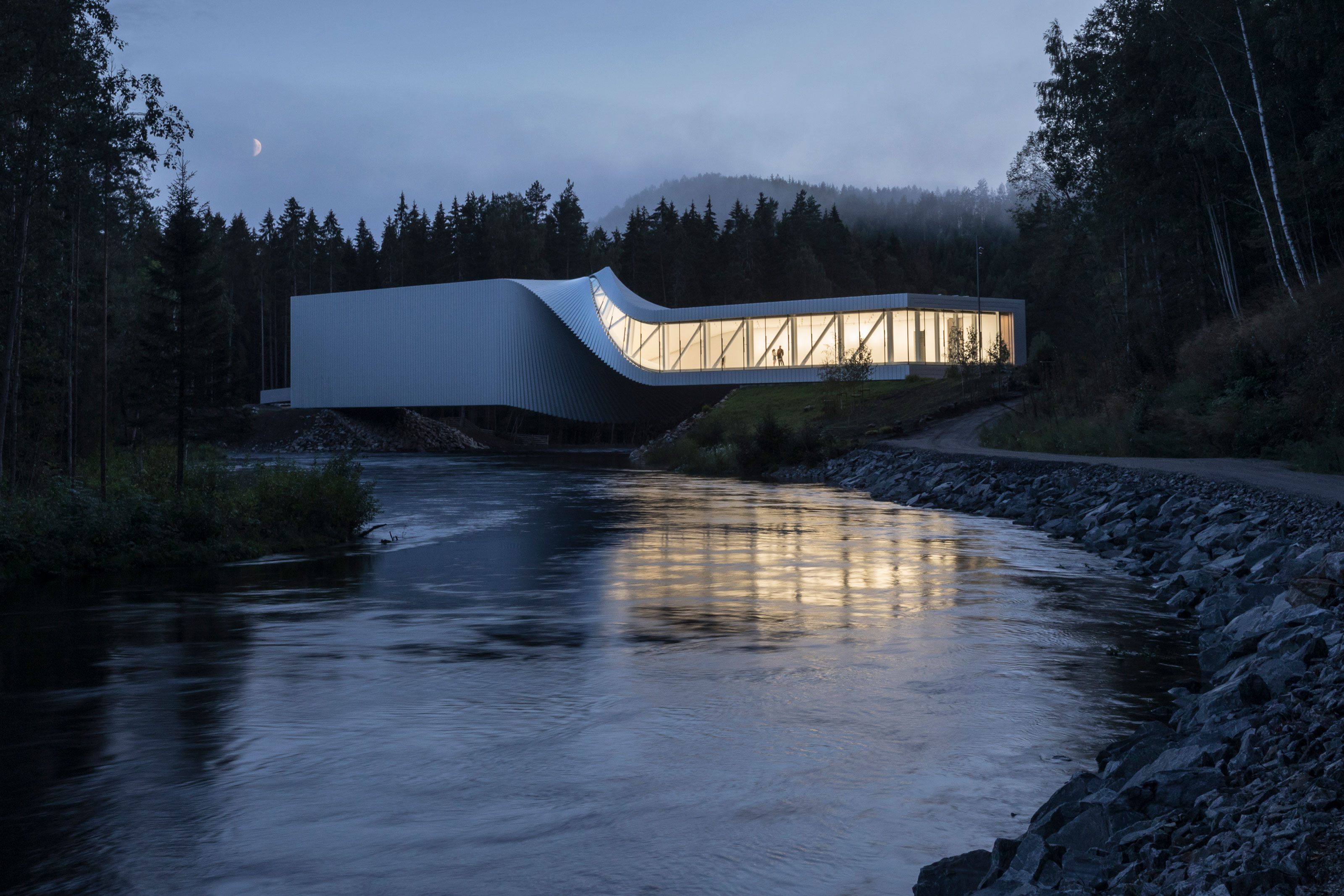 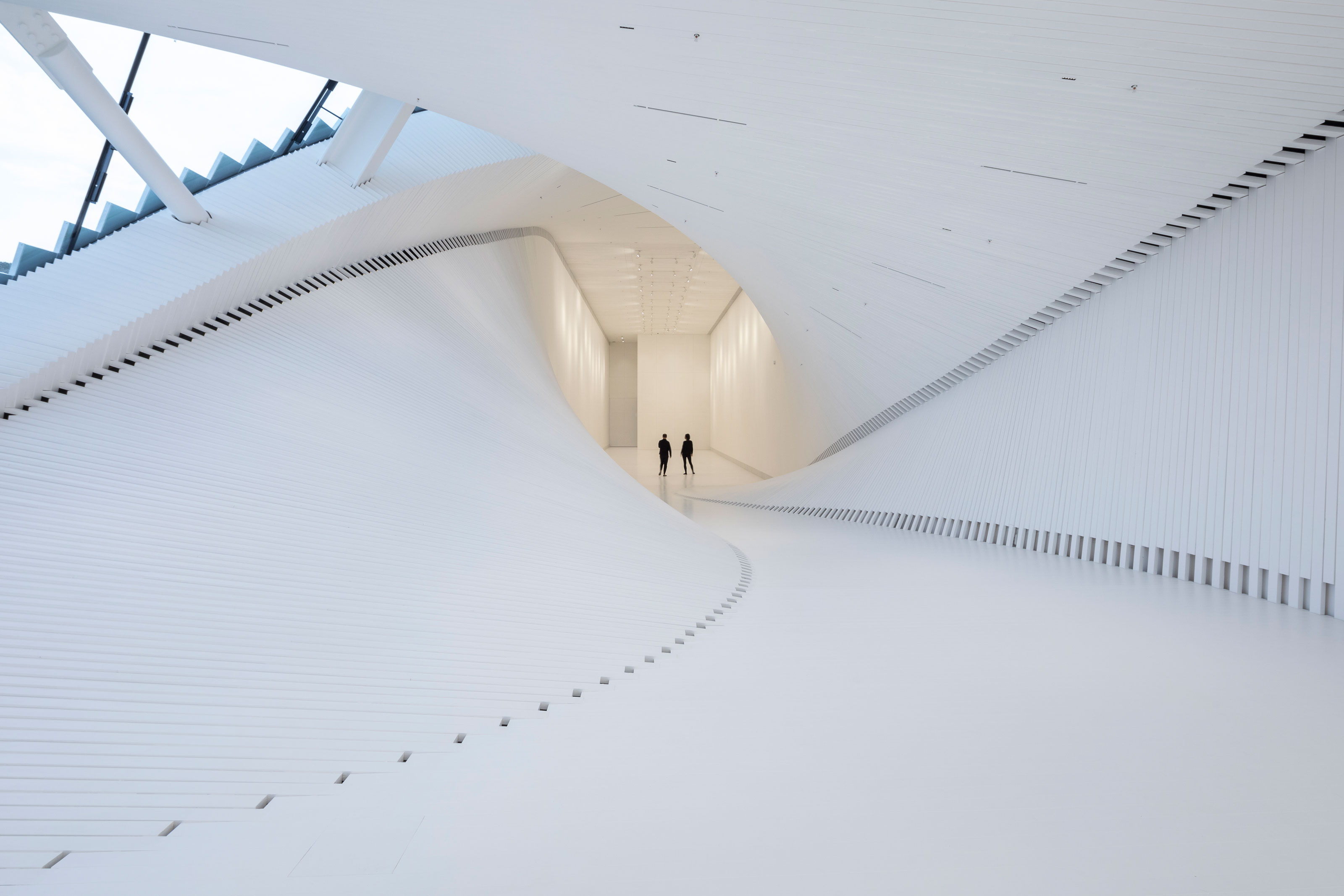 Bjarke Ingels Group has quickly become one of the most well-known firms in the world. BIG is a group of architects, designers and thinkers operating within the fields of architecture, urbanism, research and development. BIG has created a reputation for completing buildings that are programmatically and technically innovative.

The firm’s multidisciplinary culture produced a stunningly hybrid art gallery-bridge project, The Twist (Kistefos Gallery), which embraces three landscapes that overlap and intertwine. This first of these landscapes is natural, consisting of rivers, waterfalls, islands, canyons and forests; the second is an industrial landscape of mills, factories, warehouses, power plants, dams and bridges. Finally, the third landscape is that of the continuously evolving gallery — a topography composed of sculptures and art objects.

Heatherwick Studio has become synonymous with setting new design standards. From their combined workshop and design studio in Central London, the team creates buildings, spaces, master-plans, objects and infrastructure. Focusing on large scale projects in cities all over the world, they prioritize those with the greatest positive social impact.

The firm’s mixed-use Coal Drops Yard project was recognized for its unique revitalization of a historic industrial site in central London. The iconic ‘kissing’ roofs rise up and stretch towards each other until they meeting together. This bold intervention formed a new upper storey and gave the project a central focus.

Kengo Kuma’s architecture is defined by pattern and craft. Since 1990 — when he establish his namesake practice, Kengo Kuma & Associates — the firm has designed architectural works in over twenty countries. Working together with his team, Kuma aims to design architecture that naturally merges with its cultural and environmental surroundings as gentle, human scaled buildings.

The design of V&A Dundee is intended to act as a connector between the river and the city, creating a frame through which the river can be seen from the city and vice-versa. The building acts as a gate through which the city can once again access the world, in a way that reflects on Dundee’s successful history of trade. 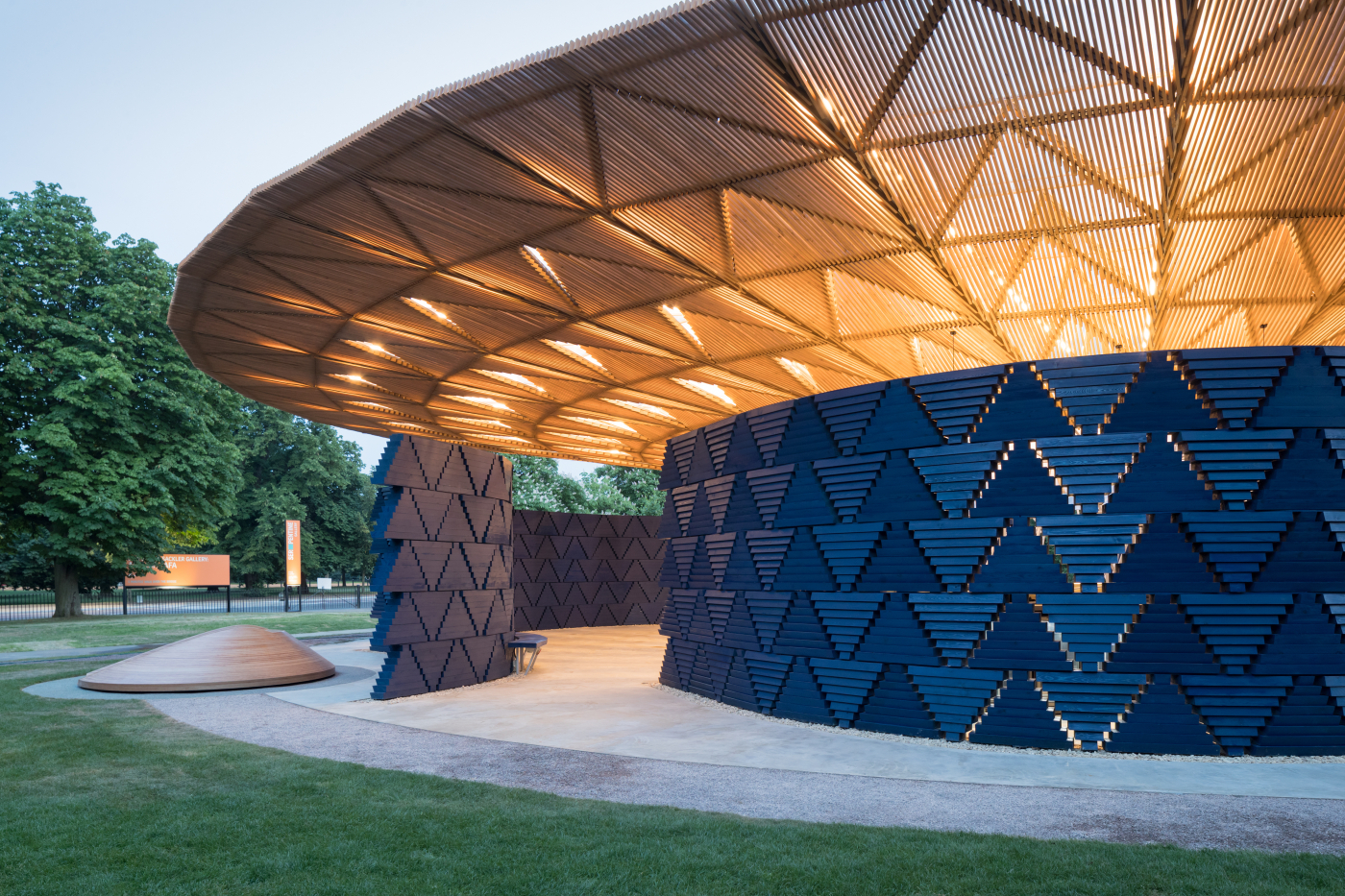 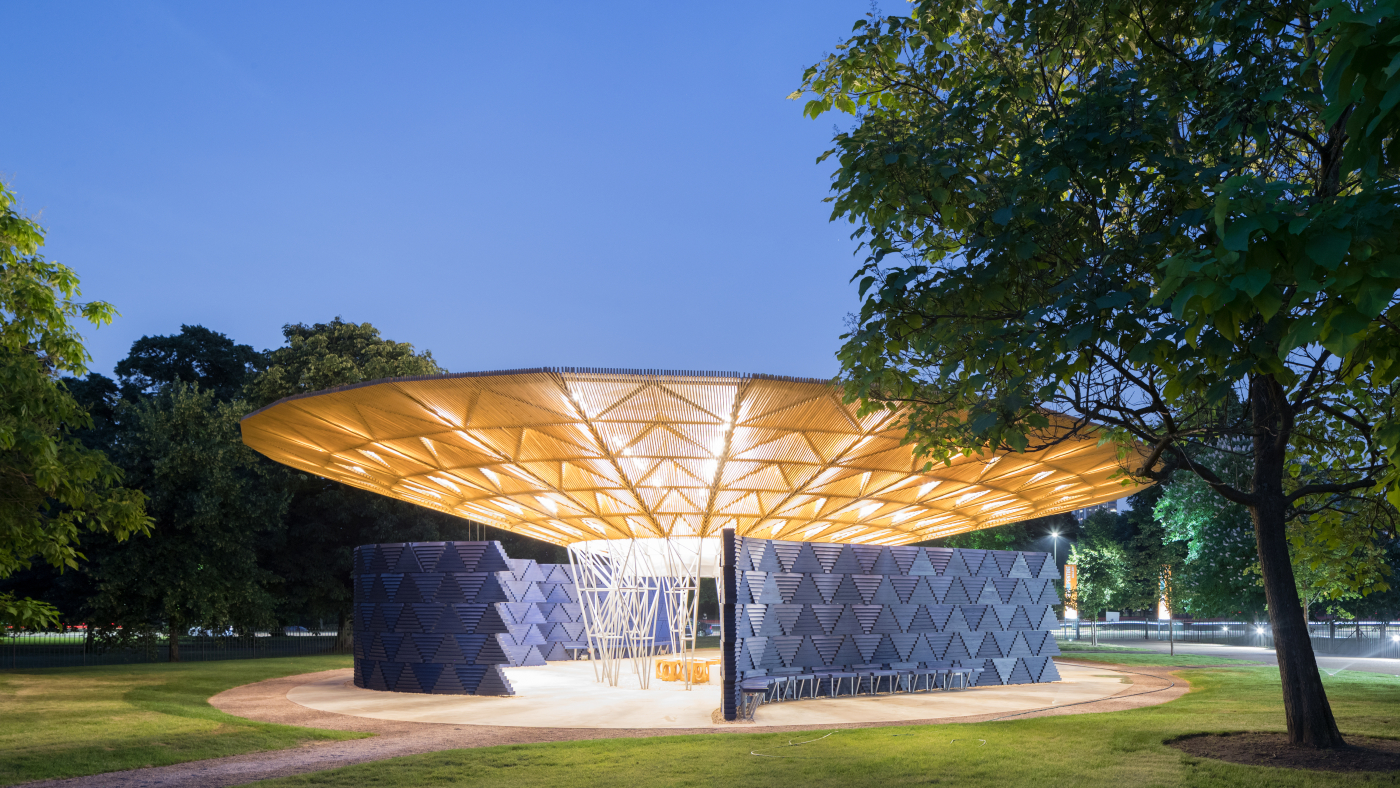 Founded in 2005, Kéré Architecture is a small firm based in Berlin with an affiliate in Burkina Faso, Francis Kéré’s birthplace. The practice is informed by a dual focus on design excellence and social commitment. Renowned for its restrained elegance of structure, pioneering use of material and an inclination towards building in regions unchartered by much of contemporary architecture, the studio has been the recipient of numerous awards.

Kéré Architecture’s portfolio spans a wide spectrum of projects from civic infrastructure to temporary installations, from concept to execution and across diverse geographies. Taking inspiration from the great tree in his hometown of Gando, under which members of the community meet to reflect on the day, Kéré’s design for the Serpentine Pavilion is based on creating this sense of community while connecting people with nature.

Long known as a practice rethinking convention, MAD subverts tradition. Ever since it was established in 2004, by Ma Yanson, the practice has earned a reputation for experimental, inventive, and forward-looking work.

MAD’s Yabuli Entrepreneurs’ Congress Center is sited along the axis of a mountain; the tent-like structure is defined by soft, sloping lines. The project’s location in Northeastern China is known for its rugged terrain and frigid temperatures, particularly its snow-capped mountains and innocent snowfields. It’s also home to annual summits hosted by the China Entrepreneur Forum (CEF).

Mecanoo was officially founded in Delft in 1984, and is made up of a highly multidisciplinary staff of creative professionals from 25 countries who are uniquely attuned to designing for human experience. Each project responds to a philosophy of People, Place and Purpose: to the client’s requirements and the user’s needs (People); the physical context, climate and culture (Place); and the current and predicted potential of a building’s function (Purpose).

Built on this foundational philosophy, the National Kaohsiung Centre for the Arts (Wei-Wu-Ying) was designed as a new home for thousands of locals and visitors alike to pursue cultural activities, uniting exhibition halls, theaters and public plazas under a single roof.

This dynamic Dutch studio began with three founding partners — Nathalie de Vries, Jacob Van Rijs and Winy Maas. MVRDV represents architecture at its best — the practice won Architizer’s Firm of the Year Award in 2018, along with a host of A+Awards for various projects. MVRDV’s diverse team is based in Rotterdam and works in the fields of architecture, urbanism and city planning.

Some of their well-known projects include the Netherlands Pavilion for the Expo 2000 in Hanover and the Tianjin Binhai Library. The firm’s diverse portfolio has been published and exhibited worldwide and received many international awards.

As a firm that explores the boundaries of materials and tectonics, Studio Zhu Pei is no stranger to designing cultural projects. Designed to be a cultural icon, their Jingdezhen Imperial Kiln Museum is also a borderless museum. The architectural and cultural complex is located in the center of Jingdezhen historic district, adjacent to the Ming and Qing imperial kiln ruins. It is a national museum with special significance and a key project of Jiangxi Province.

The building area of the museum is mainly divided into the ground floor and the underground floor; the design comprises more than half a dozen vaults based on the traditional form of the kilns. On the lower level, indoor and outdoor spaces are interconnected; each of the vaults and courtyards, and together with the first floor, forms a three-dimensional space with a strong local cultural grounding. 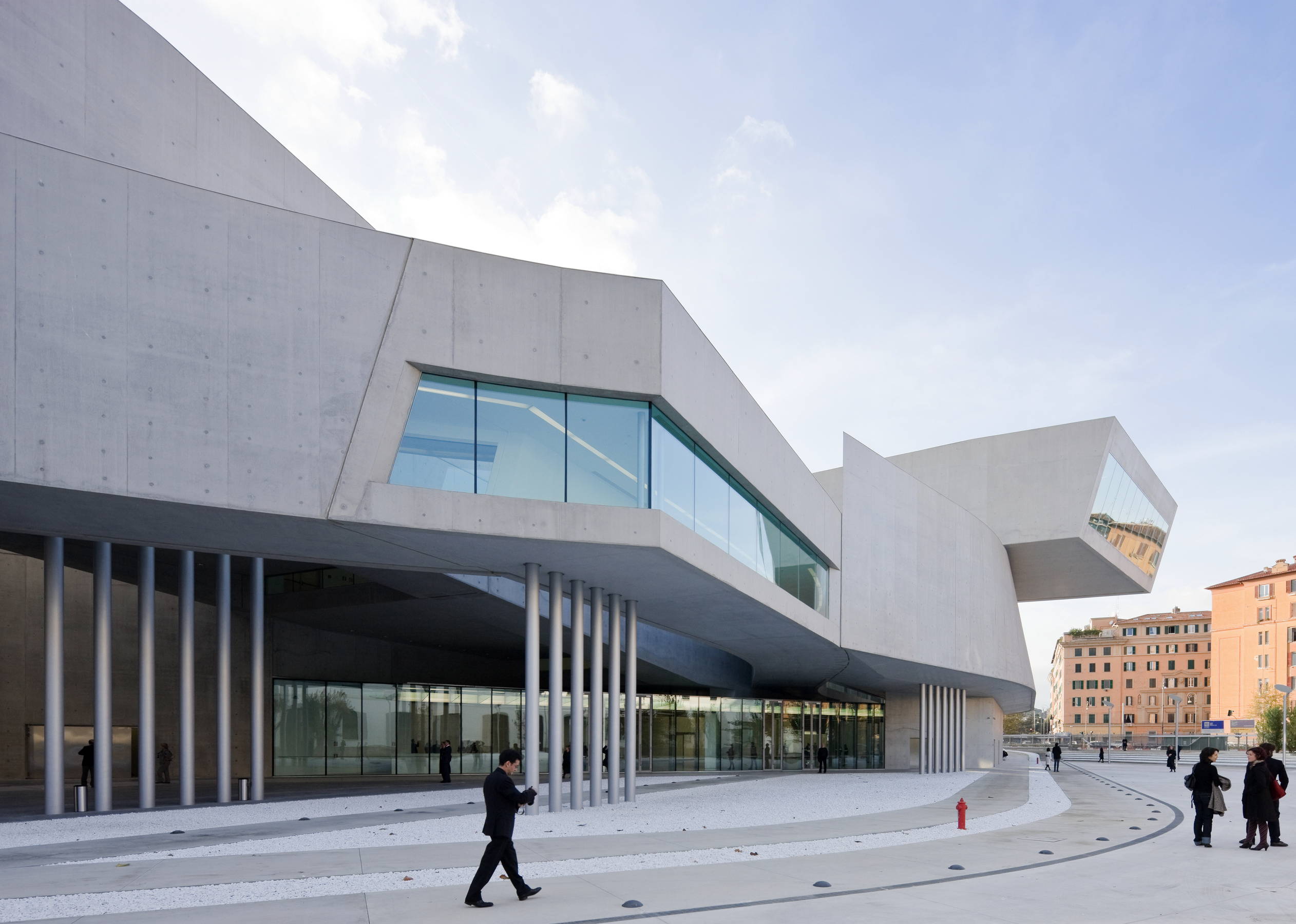 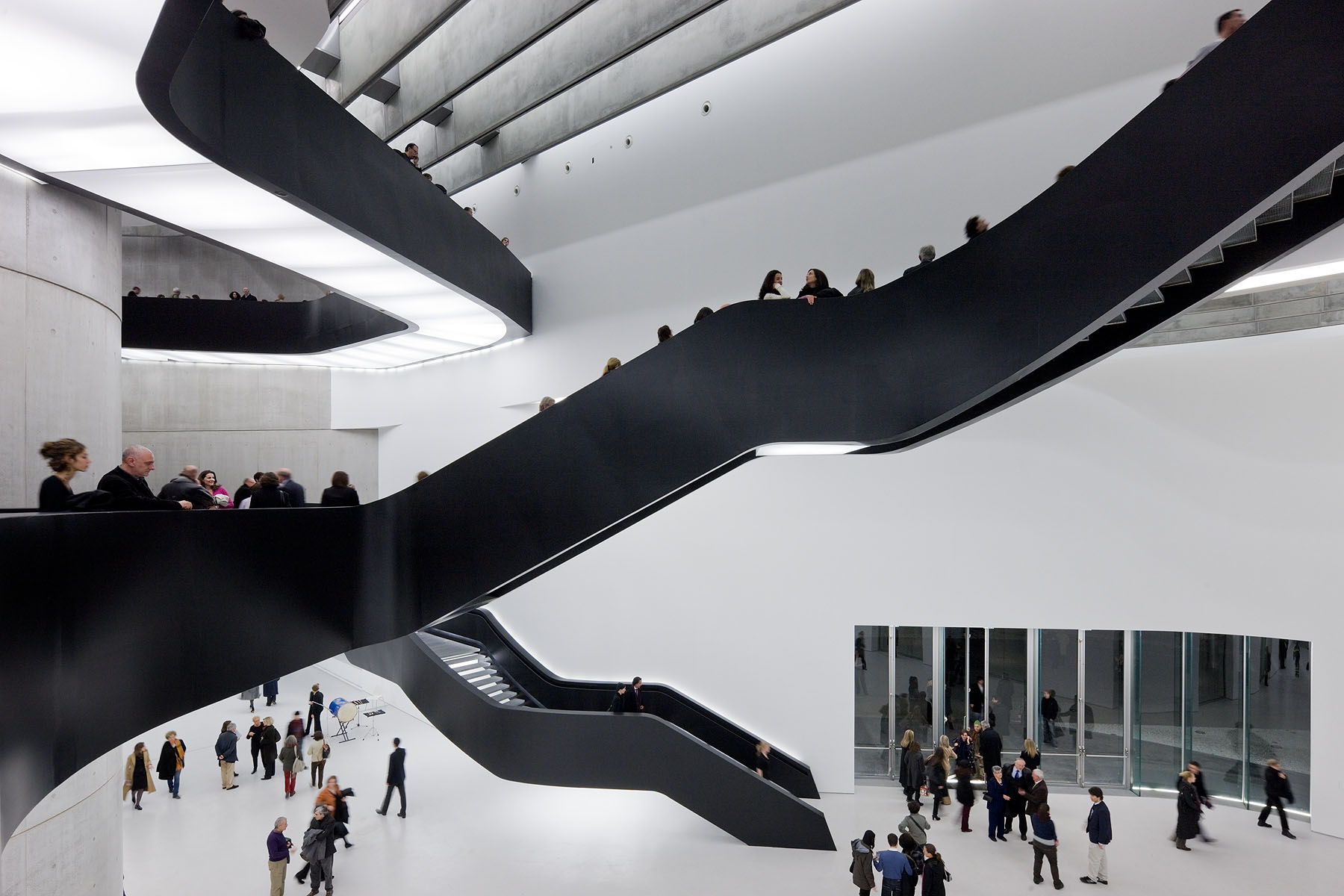 Zaha Hadid founded Zaha Hadid Architects in 1979 and was awarded the Pritzker Architecture Prize in 2004. The firm is internationally known for the built, theoretical and academic work. While Zaha Hadid has passed, the studio continues her legacy of dynamic and innovative projects building on over thirty years of revolutionary experimentation and research in the interrelated fields of urbanism, architecture and design.

The MAXXI: Museum of XXI Century Arts supersedes the notion of the museum as ‘object’ or — presenting a field of buildings accessible to all, with no firm boundary between what is ‘within’ and what is ‘without’. Central to this new reality are confluent lines — walls intersecting and separating to create interior and exterior spaces.

Architizer is thrilled to announce the winners of the 10th Annual A+Awards! Want to earn global recognition for your projects? Sign up to be notified when the 11th Annual A+Awards program launches.
Trending Articles