Judging is now underway for Architizer’s 3rd Annual One Photo Challenge. We've narrowed down the entries to reveal the Top 100 Finalists. Stay tuned for the Winners' announcement in mid-August!

Architecture provides the backdrop for everyday life. Materials, form and space are organized around the ways we unwind, connect and gather. The approach to architecture-as-backdrop becomes especially apparent in spaces of performance and exhibition, where structures are created with room for movement or display. Illustrating this concept, carousel pavilions are made to showcase an iconic amusement ride while incorporating a rotating circular platform with seats for riders. Today, the architecture of carousels is reimagined through craft, technology and novel enclosure designs.

The oldest predecessor of carousels comes from 6th century Byzantium, while the modern version emerged from early jousting traditions in Europe and the Middle East. Eventually, the first platform carousel was made in the 19th century. Dobbies, as they were known, had a platform that rotated with the animals and chariots fixed on it as it was operated manually. Carousels as we’ve come to know them have evolved considerably. The following projects represent carousel design in a variety of environmental contexts, and together, they share a common language built upon a history of amusement and innovation.

Jane’s Carousel was built in 1922. Having spent most of its time in Ohio, it was placed on the National Register of Historic Places and began a new chapter of its long history in Dumbo, Brooklyn. The design team’s project was a pavilion for this carousel. In the heart of the newly developed Brooklyn Bridge Park, facing Downtown Manhattan, Jane’s Carousel sits between the massive stoned pier of the Brooklyn Bridge and the slender blue steel pier of the Manhattan Bridge, a few feet from the East River.

The pavilion’s aim is to be a protective shelter for the carousel, as well as a welcoming public space for the children of the city coming for enjoyment and a fun-filled ride. At night, the pavilion turns into a magic lantern, visible from the surrounding environment: every hour, the horses’ shadows dance on the building’s façades, marking the hour in the way of a city clock. The building’s primary structure is made up of four 2’diameter cylindrical steel columns set back six and a half feet from the facades and tied together by four steel beams located above the ceiling. It sits on a 6 foot high concrete cellar which raises the Carousel floor above the flood line and is used as a passive ventilation device to cool down the building. 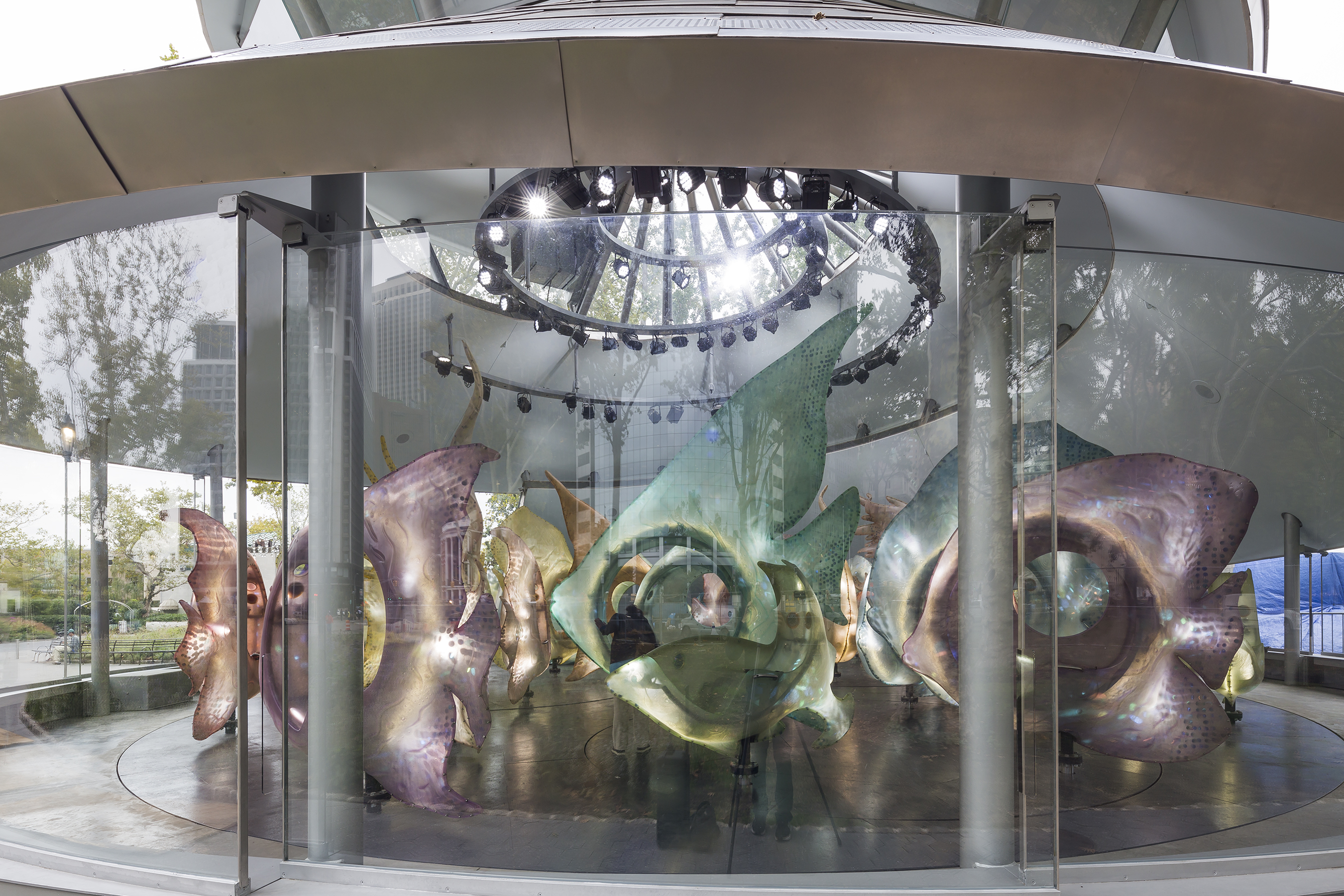 The SeaGlass Carousel was designed as a collaboration to create a distinctly contemporary ecologically themed environment for this public space. The project transforms the traditional ride structure into an “instrument of the future” with the potential of digital projection and electrified glass technology, or “Smart Glass”. An audio component mixes old and new technology, combining actual environmental noise made by moving parts with amplified original musical scores recorded live by New York musicians. The Carousel’s underwater theme echoes its location on the site of the first home of the New York Aquarium.

Located on the edge of New York Harbor near the old Battery, the spiraling structure was constructed of stainless steel and glass, forming a shell whose interior provides a white screen for the underwater projections. Using the paradigm of the magic lantern, the Smart Glass changes from clear to opaque as the ride begins, dimming the space in a rising sequence to capture the experience of diving under water. As the carousel spins the interior digital projections cast moving images on the building’s shell, animating the voyage.

The core concept for SLADE’s carousel enclosure was to create a structure that is light in every sense: a visually light-filled almost transparent gem in the park and light on the land, exerting minimal impact on the site and environment. Situated in a park setting covered with mature trees, the Staten Island Zoo is a naturalistic, didactic oasis within a dense urban setting. As part of that larger project of redesigning the Children’s Farmstead at the Staten Island Zoo, the design team was charged with creating the enclosure for a new carousel commissioned by the zoo. As a year-round attraction, the carousel enclosure had to provides shelter and thermal comfort through all seasons.

One of the shortcomings of most carousel enclosures is that they cast a shadow on the carousel, making it very difficult to see the actual carousel inside when you are outside of the enclosure on a bright sunny day, particularly if the carousel is enclosed by glass. The glass reflects the exterior when the interior is darker than the exterior. Comprised of transparent operable glass panels and a transparent ETFE roof, SLADE’s enclosure is a jewel-like structure. The transparency of the walls and roof allow natural light to fill the enclosure making it possible the clearly see the ornate carousel even when the glass panels are all closed. It also provides natural illumination for those riding. The glass panels slide open, stacking over each other to provide 50% open walls on summer days- making an even stronger connection between interior and exterior when the weather permits. 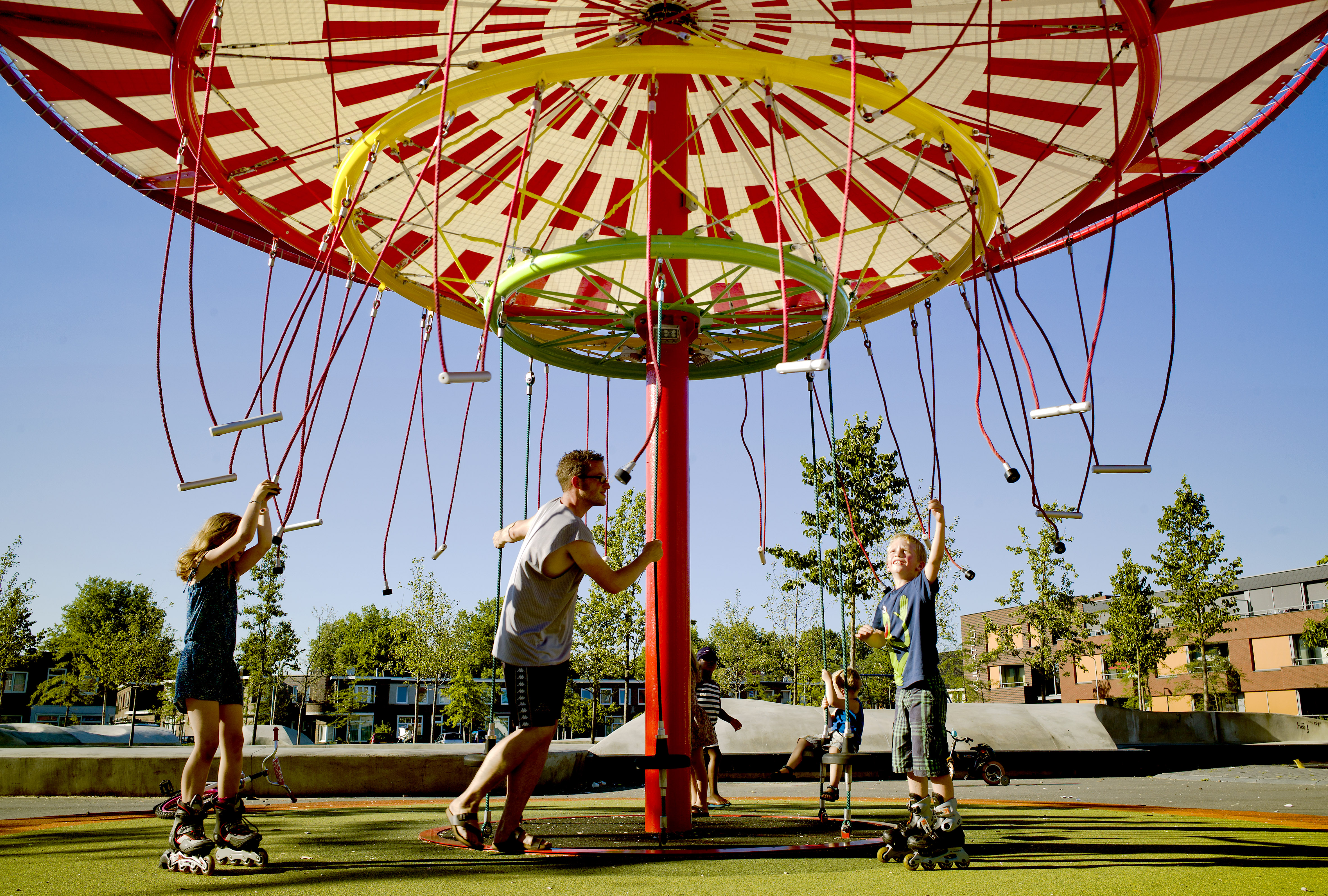 Ecosistema Urbano designed the play structure with two particular focuses in mind. The first was to promote education through play. The ideas was that teaching children about alternative methods for generating electrical power with their own physical experiences sends a subtle message about the potential for creative and a more sustainable approach to urbanism. The Energy Carousel is a sporty structure as well as a playful, educational and innovative object, designed as a meeting place for all age categories. The playful structure consists of a tensegrity structure formed with ropes and textiles, as a forest of revolving rope swings that hang at different lengths.

Second, was to use efficient materials that also serve to highlight the project’s unique design. The kinetic energy released by the children’s hanging and turning on the ropes is captured via the carousel structure. The kinetic energy released by the children’s movement is stored in a battery and supplied after to light up the structure at dusk. This energy is used to generate the lighting in the evenings. The color of the lights also changes according to how much energy has been generated by the children on any particular day.

Sited in Butchart Gardens, this pavilion structure was designed by HCMA Architecture + Design and is home to the Rose Carousel. The Rose Carousel has been in operation since December, 2009, and the building that houses carousel was designed to be environmentally-friendly. It optimizes use of natural lighting, the irrigation system is used as a heat source, passive ventilation is used, and the plumbing fixtures are water efficient. It is also home to a living roof with native mosses that grows plants year-round. The design includes a glass facade and domed roof, as well as a nearly 300-foot-long serpentine board-formed concrete wall.

The only carousel on Vancouver Island, it features a menagerie of thirty hand-crafted animals handpicked by Robin Clarke, The Gardens’ owner and great granddaughter of Jennie Butchart, in consultation with an artist from North Carolina. The animal carvings, which include bears, horses, ostriches, zebras, a whale and more, were crafted by some of the few remaining carvers of carousel art. Each animal is carved from basswood and took many months to complete. 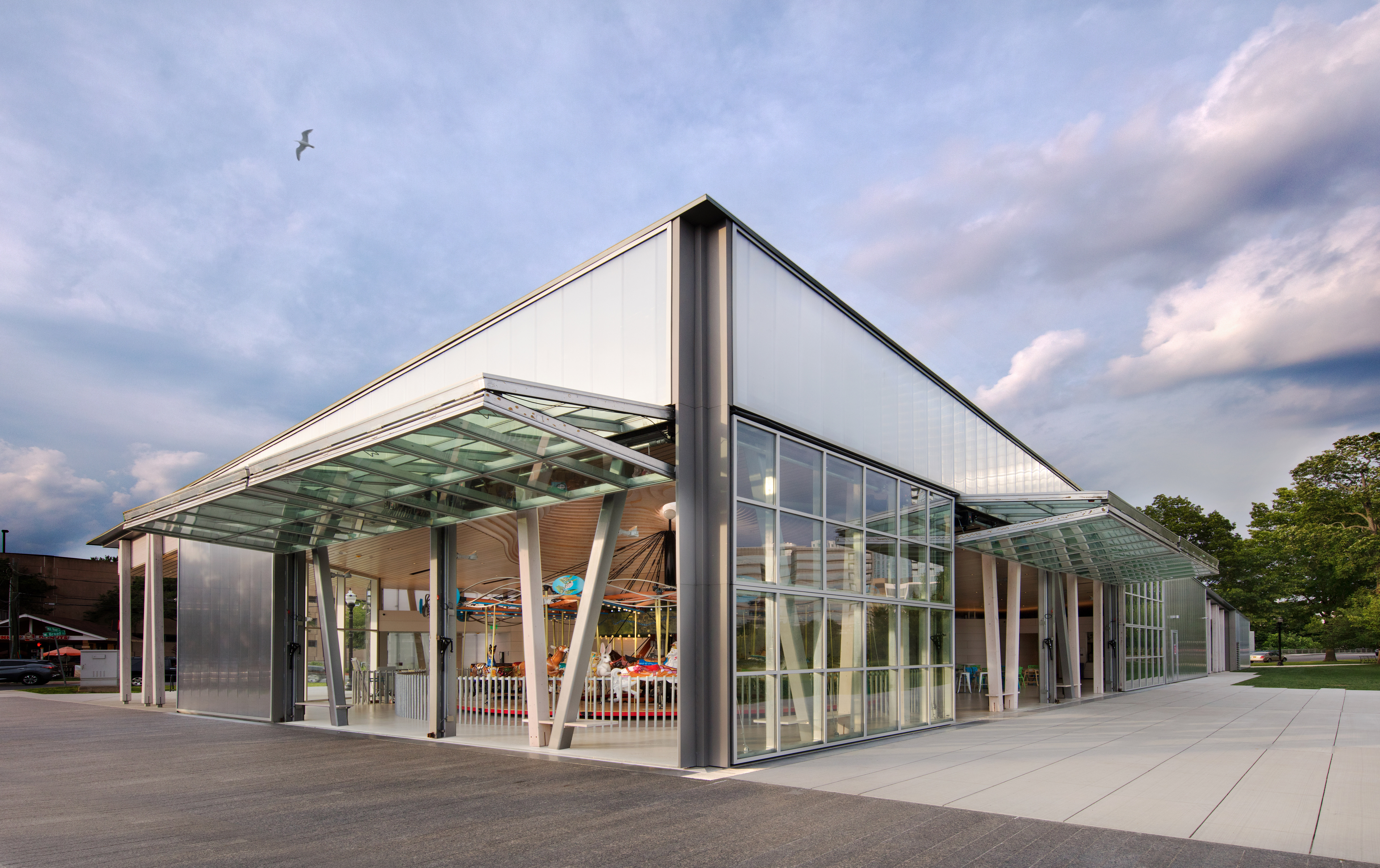 This carousel pavilion was designed as a threshold between a restored riverbank and an urban edge in the city of Stamford, Connecticut. Completed in 2017, the 4,900 square foot carousel pavilion is an integral part of this larger scheme. Situated to the north of the park, along a major downtown street, the pavilion stands as a gateway to the rest of the park and the riverbank. The carousel pavilion is also an attraction in its own right, featuring a historic carousel dramatically lit by a dynamic wood cupola integrated into the ceiling above.

Evoking the topography of the Mill River as it meanders through Stamford, this cupola was modeled as topographical contours and subsequently prefabricated for accurate and expedient assembly on site. In a more direct connection to the landscape, a series of pivoting panels on the pavilion’s perimeter open toward the riverside, framing views for the whirling carousel riders within. Wrapped in translucent polycarbonate panels on an engineered lumber frame, the carousel pavilion subtly grounds the rest of the park, offering up a convenient gathering space for residents, and in the evenings, transforms into a luminous beacon at the head of the river walk.

Judging is now underway for Architizer’s 3rd Annual One Photo Challenge. We've narrowed down the entries to reveal the Top 100 Finalists. Stay tuned for the Winners' announcement in mid-August!
Trending Articles

Architects are creating elevated and original commercial retail concepts, bringing dedication to com munity, heritage and craftsmanship to the table.