Can you capture a single drawing that tells a compelling story about architecture and its inhabitants? Send us a drawing, tell us a story, win $2,500! Enter the One Drawing Challenge before the Late Entry Deadline on August 20th, 2021.

Drawings are windows into other worlds. In design, they ask us to question what see and how we imagine between the lines. They are also architecture in their own right. Of the many different drawing styles you can explore, composite graphics and hybrid drawings are one way to tell a compelling story from many angles. Whether they are composed by mixing mediums or styles, or they combine multiple views, media or perspectives in one, this style is meant to layer information.

At its core, a hybrid drawing organizes multiple stories and types of narratives into a single frame. It’s important to realize the potential of each style and its use in communicating your concepts or a project’s core ideas. Whether guiding or representing, drawings are tied to practices of making. For hybrid drawings and composite graphics, layering is defined by visual hierarchy. This idea is that you overdraw or create multiple layers of drawings on top of one another to create depth. Layering can also relate to color, line work or how you think about opacity.

Apartment #5, a Labyrinth and Repository of Spatial Memories by Clement Laurencio

Hybrid drawing can also be created using a single medium. As the overall winner of the fourth annual Architecture Drawing Prize, Apartment #5 by Clement Laurencio was also the winner of the Hybrid Category and a Commended Entry in Architizer’s One Drawing Challenge. The dwelling, set in London, re-creates atmospheres of places remembered from a recent voyage to India. Separate pencil hand-drawings are digitally composed, corrupting and curating places into a labyrinth of spatial memories.

Commenting on the overall winner, artists Ben Langlands and Nikki Bell, judges of the prize said: “This drawing creates a labyrinth of drawings, each with its own story. Familiarity and mystery are conveyed with a sensitive, confident technique of great skill and precision. There is nothing loud or colorful, only a realm of acutely observed detail with a powerful muted presence.” Clement’s work is inspiring as it tells a fantastic composite story through a single medium. 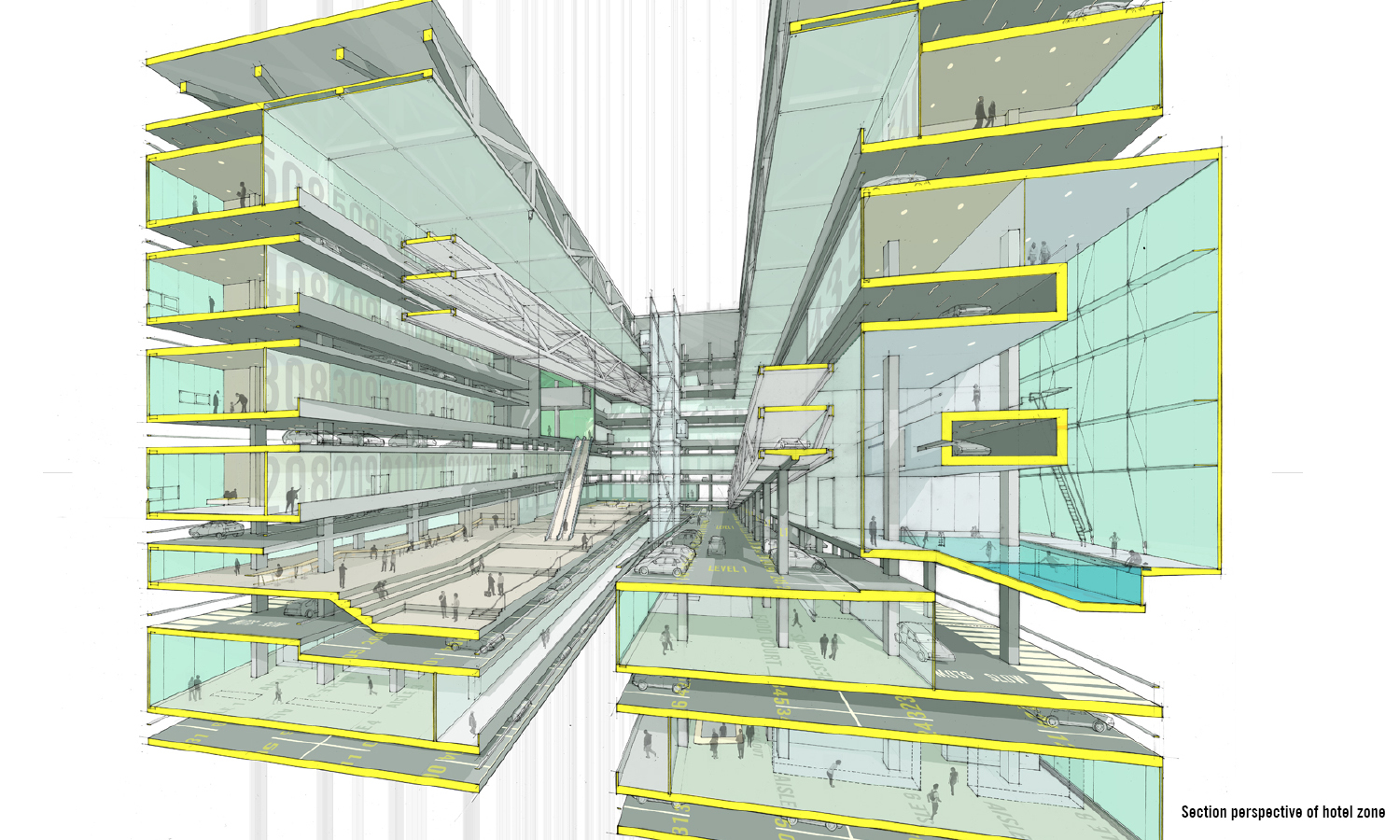 Dubbed Overdrawing, LTL Architects has developed their own hybrid drawing style to illustrate their ideas. The technique aims to resolve the split between traditional forms of architectural representation (drawing by hand, sketching, and hardline constructions) and generative immersive representations. In this example, you can see how the drawing combines what works best from the overlaps of disparate mediums and methods.

Through an exchange between scanners, printers, software and parallel rules, the team made a rendering that was overdrawn by hand, with detailed development and design alterations to the initial form emerging in the process. The drawing is then scanned and reunited with the original rendering, and this hybrid image is further digitally manipulated to capitalize on the qualities of both media. One way to think of hybrid drawings is in a storyboard format. While a typical storyboard entails distinct images placed in succession, when combined into a single image these can create a narrative that interrelates diagrammatic information with photographs, isometric drawings, and more. Tschumi’s Manhattan Transcripts differ from most architectural drawings insofar as they are neither real projects nor mere fantasies. Developed in the late ’70s, they proposed to transcribe an architectural interpretation of reality.

To this aim, they employed a particular structure involving photographs that either direct or “witness” events. At the same time, plans, sections and diagrams outline spaces and indicate the movements of the different protagonists intruding into this architectural “stage set.”

The Transcripts’ explicit purpose was to transcribe things normally removed from conventional architectural representation, namely the complex relationship between spaces and their use, between the set and the script, between “type” and “program,” and between objects and events. These types of images showed how architectural drawings could move beyond the representation of three dimensions to incorporate a fourth — time.

A mixed media collage is a type of illustration that is great for speed but also for informal presentations where broad ideas and atmosphere are the focus. These are less about the details, more about telling a story that can be playful or open-ended. Post processing is typically much looser and maintaining proper perspective is unnecessary.

For Brygida Zawadzka by Duong Vu Hong, photographs can be combined with illustrations, drawings or renderings to create a layering of information. The result is a drawing that’s open ended and allows room for interpretation as you understand a handful of distinct elements in the frame and move across the image. Late architect and artist Lebbeus Woods is most well-known for his unbuilt ideas. Many of these were published online from 2007 to 2012 in the form of sketches, drawings and blog posts ranging from architectural criticism to full-blown theses on contemporary urban conditions. In 1995, Lebbeus Woods reimagined San Francisco transformed by the earthquakes that threaten it.

These “Inhabiting the Quake” drawings depict an architecture that amplifies seismic forces, modeling them as arched, fractured, and splintered forms. With multiple mediums mixed together, Woods proposed an architecture between the constructive and destructive forces shaping the city.

Can you capture a single drawing that tells a compelling story about architecture and its inhabitants? Send us a drawing, tell us a story, win $2,500! Enter the One Drawing Challenge before the Late Entry Deadline on August 20th, 2021.