The Office for Metropolitan Architecture is a landmark practice. OMA was founded in 1975 by Rem Koolhaas and Elia Zenghelis, along with Madelon Vriesendorp and Zoe Zenghelis. Since then, the team has become known for visionary solutions that upend programmatic convention. Understanding design as a process, OMA has shaped how we understand architecture and design around the world.

Drawing on the firm’s more recent portfolio of work, the following projects were built within the last five years. Showcasing critical and rigorous design concepts, they are made with a wide variety of programs at diverse scales. Sited around the world, the collection begins to illustrate OMA’s impact on architecture and urbanism with different materials, forms and spaces. Together, they also represent the practice’s conceptual approach to a wide array of typologies.

TPAC consists of three theaters, each of which can function autonomously. The theaters plug into a central cube, which consolidates the stages, backstages and support spaces into a single and efficient whole. This arrangement allows the stages to be modified or merged for unsuspected scenarios and uses. The design offers the advantages of specificity with the freedoms of the undefined.

Located in Dubai’s Al Qouz industrial area, Alserkal Avenue was founded in 2007 with the aim of promoting cultural initiatives in the region. Since then, it has become Dubai’s most important art hub with twenty-five galleries and art spaces. Concrete, a new venue, addresses the districts growing need for a centrally located public space which can host a diverse program. 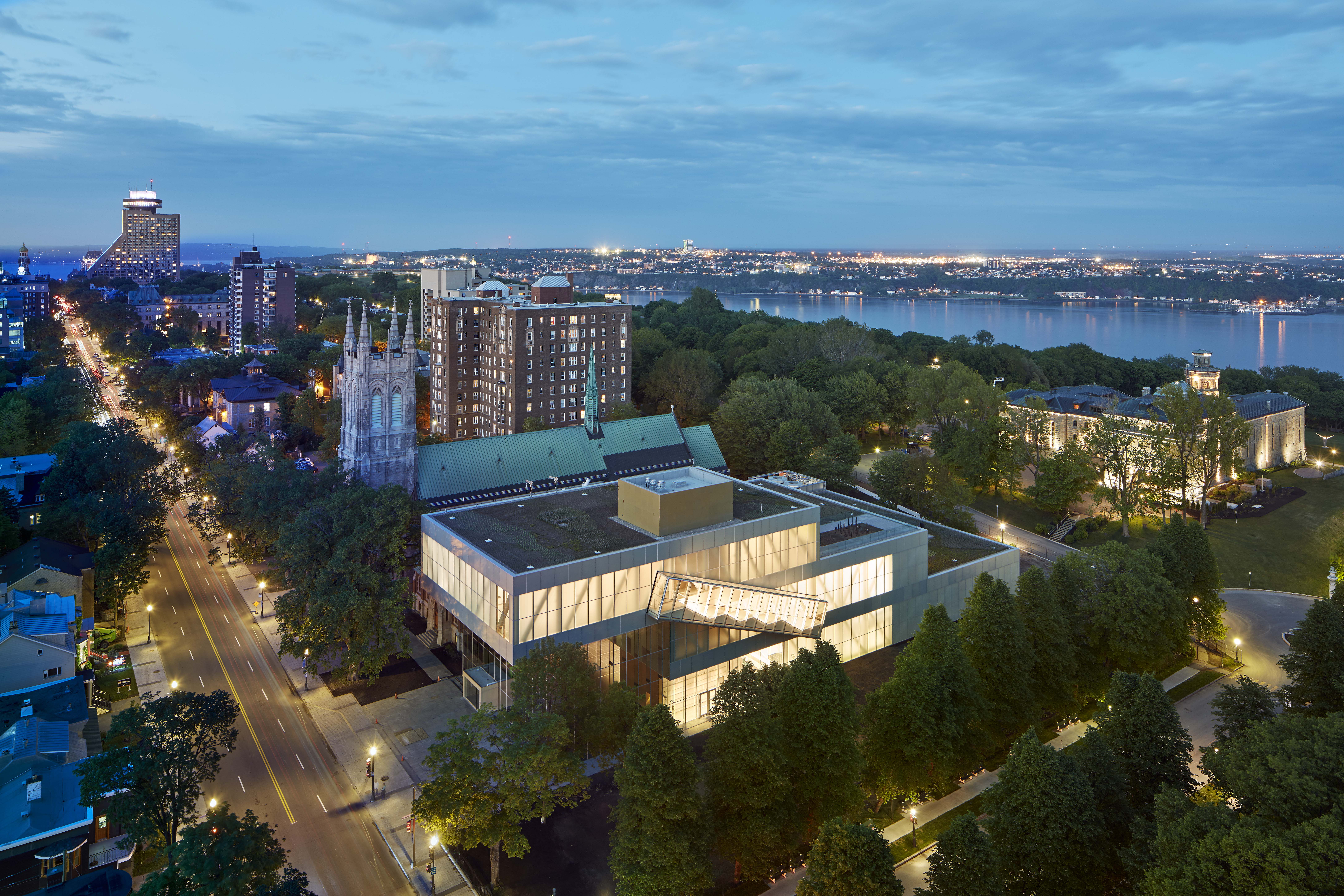 The Pierre Lassonde Pavilion — the Musée national des beaux-arts du Québec’s fourth building is interconnected yet disparate — is an ambitious addition to the city. Rather than creating an iconic imposition, it forms new links between the park and the city, and brings coherence to the MNBAQ. In order to respond to context while clarifying the museum’s organization and a adding to its scale, new galleries were stacked in three volumes of decreasing size.

A dramatic renovation of the 1960’s restaurant on site, the Garage Museum is a center for contemporary art in Moscow. The museum program includes galleries, a shop, café, roof terrace, auditorium and offices. A new translucent polycarbonate façade wraps the original structural framework and is lifted off the ground, allowing views between Gorky park and the exhibition space inside.

OMA with Allies and Morrison were the architects responsible for the design of the refurbished structural shell and external envelope of the building. The project required a close working relationship with Design Museum interior architects, John Pawson. Significant and complex refurbishment works were carried out, including the wholesale reconfiguration of the structure and basement excavation to increase floor area and organizational efficiency to suit the needs of the Design Museum.

Timmerhuis was designed as a new municipal building for the city hall that combines residential and administration space. Formed as modular units that work within an innovative structural system, the building was designed to be the most sustainable building in the Netherlands. OMA accomplished this through the building’s core concept of flexibility, and also through the two large atriums that act like lungs.

First constructed in 1228, and located at the foot of the Rialto Bridge across from the fish market, the Fondaco dei Tedeschi is one of Venice’s largest and most recognizable buildings. OMA’s restoration of the building was commissioned by the Benetton family in 2009 to transform the 9,000-square-meter structure into a department store, now under a leasing agreement with Hong Kong-based DFS.

Located in the heart of Perth’s cultural precinct, the Hassell + OMA design was conceived as a ‘collection of stories’, offering a multidimensional framework to engage with Western Australia. A holistic building, comprised of heritage and new structures, the New Museum for Western Australia will be a place where the local community and global visitors gather.

The Lujiazui Harbour City Exhibiton Centre is located on the northern and most recent development of Shanghai Pudong, along the Huangpu River, one of the most photographed waterfronts in the world. The new Exhibition Centre is positioned on the ramp of a former ship cradle and provides a concentrated event space within the surrounding financial district.

The store in Gwanggyo — a new town just south of Seoul — is the sixth branch of Galleria. Located at the center of this young urban development surrounded by tall residential towers, the Galleria’s stone-like appearance makes it a natural point of gravity for public life in Gwanggyo. The store has a textured mosaic stone façade that evokes nature of the neighboring park.