How can architecture be a force for good in our ever-changing world? During Future Fest, we’re pose this question to some of the world’s best architects. We're hosting daily virtual talks from September 12th to 30th, which are 100% free to attend.  Check out the full schedule!

While efficiency may seem at odds with great design, some of the best architecture is both quick to assemble and beautiful to behold. This is especially true with prefabricated projects, those buildings and structures that are manufactured in sections to enable quick or easy construction. While prefabrication has had a slow start and adoption, this is starting to change. Looking ahead to see what’s in store, we’re putting a special focus on The Future of Architecture for an entire week this September. The virtual event, Future Fest, will be 100% free to attend.

Prefabrication is a type of construction that can be used with a wide variety of materials and forms. However, until now, it has most commonly been used in residential design for private clients. This is by no means the limits of what’s possible with prefabrication, and today, architects and designers are embracing this construction technique alongside contractors and manufacturers across building typologies. From schools and cultural projects to commercial buildings, the following projects illustrate the possibilities of prefabrication around the world. 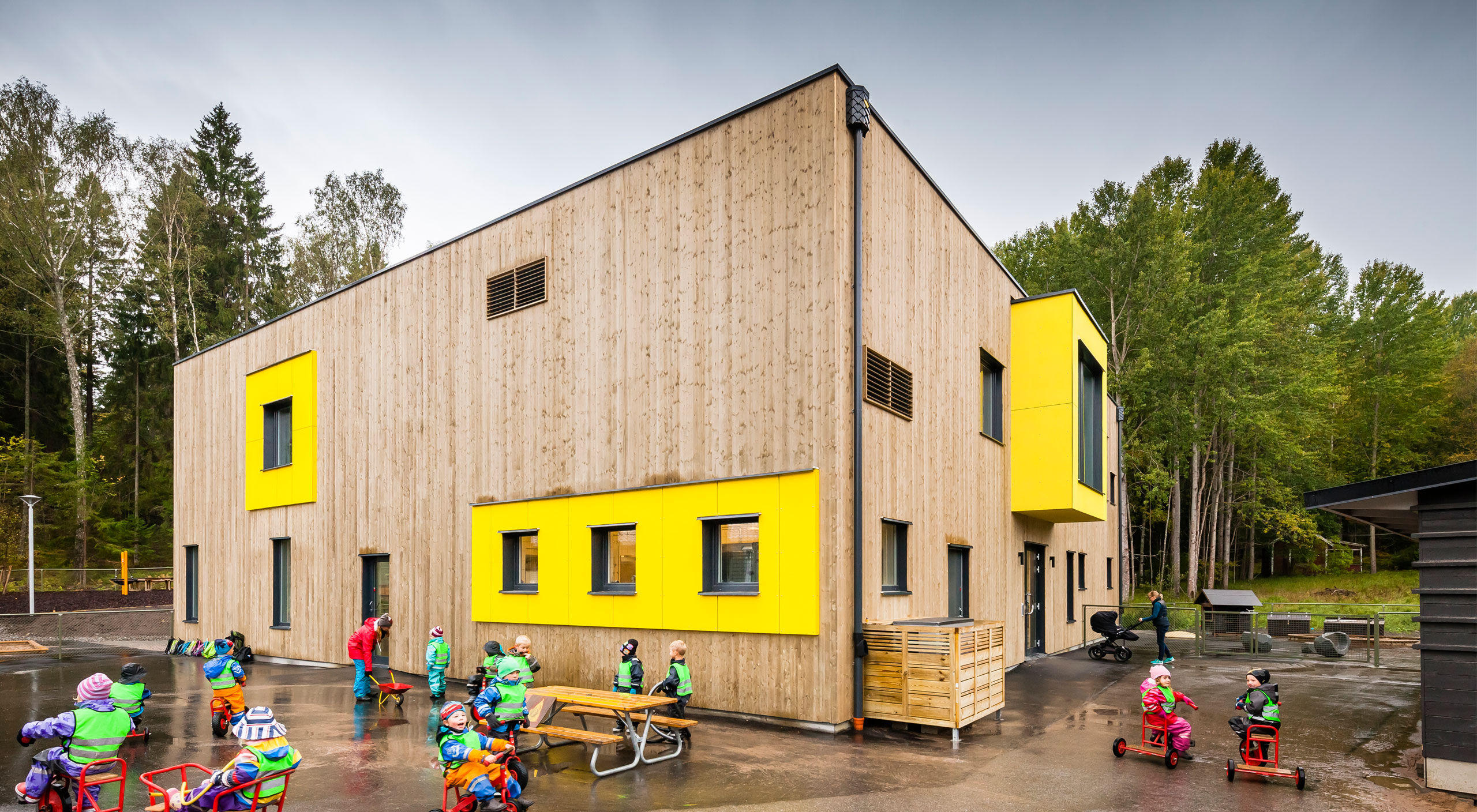 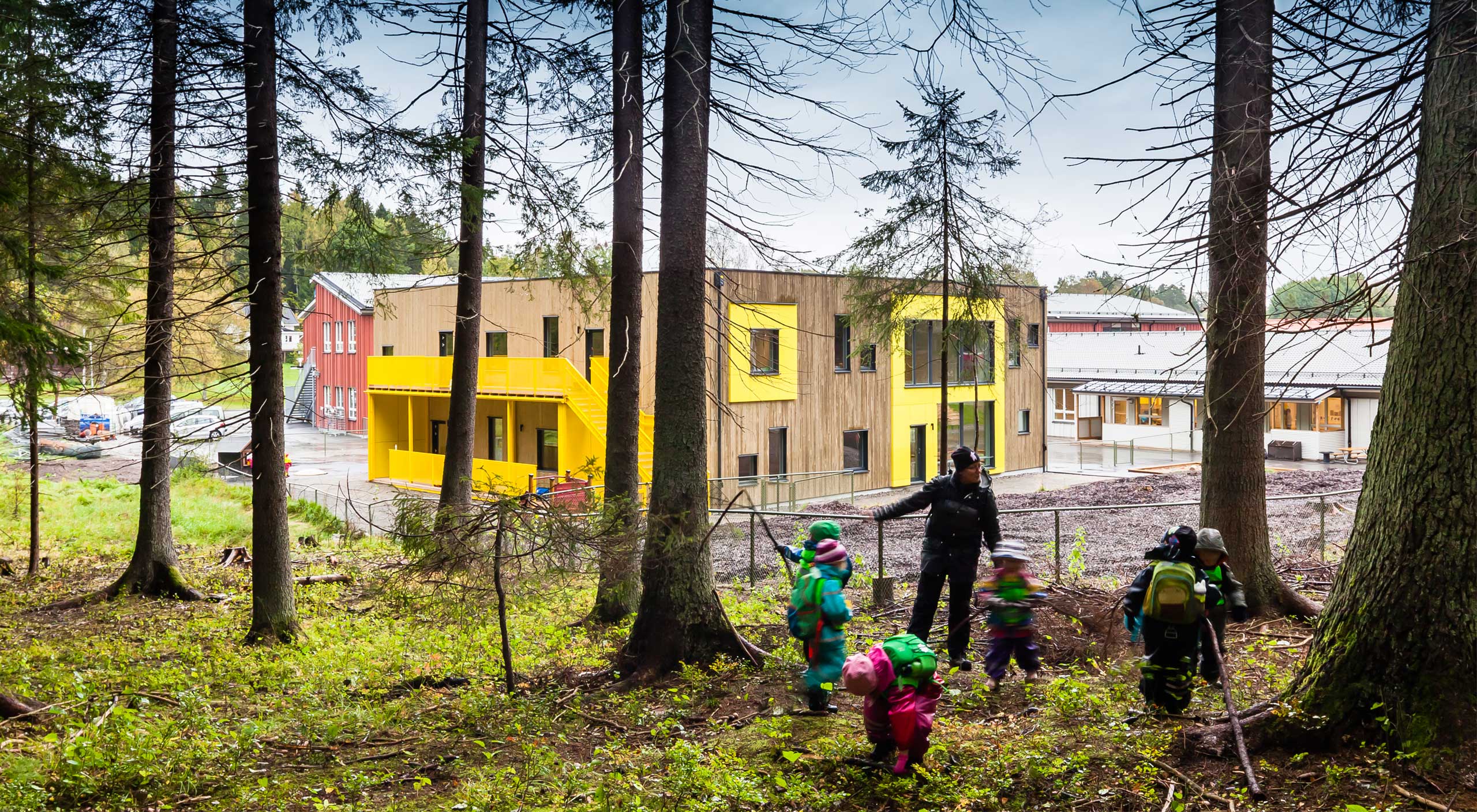 Working with a range of companies, the Vendelsö Hage preschool was built using passive house technology with prefabricated modules. The task was to satisfy the preschool’s program requirements, create an attractive design, a healthy working environment for children and teachers as well as a good project economy. Friendly Buildings’ modules can be designed to specifically suit different requirements in terms of program and design.

The project was carried out in a very short amount of time, with less than a year going by from first sketch before the preschool had moved in and was up and running. One of the advantages of prefabricated modules is that work on the land and the building can take place in parallel, which speeds up the entire construction process. 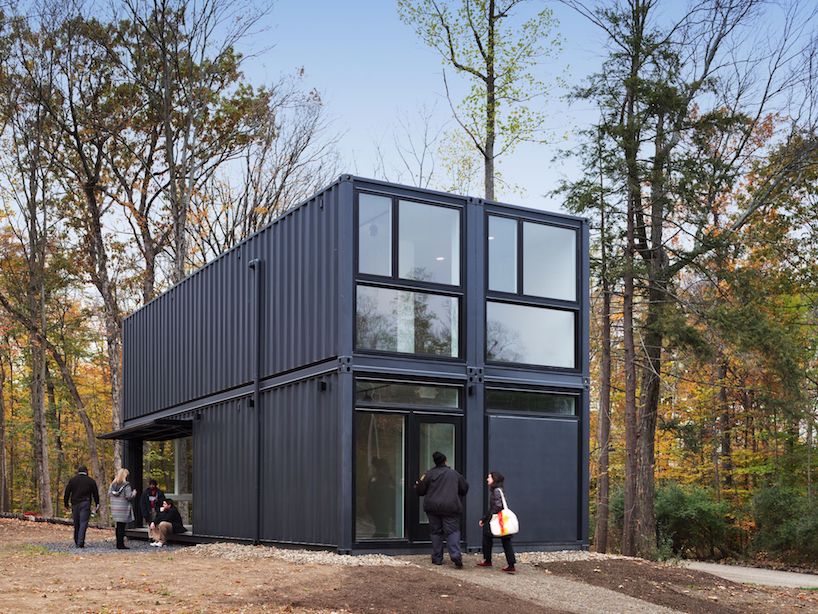 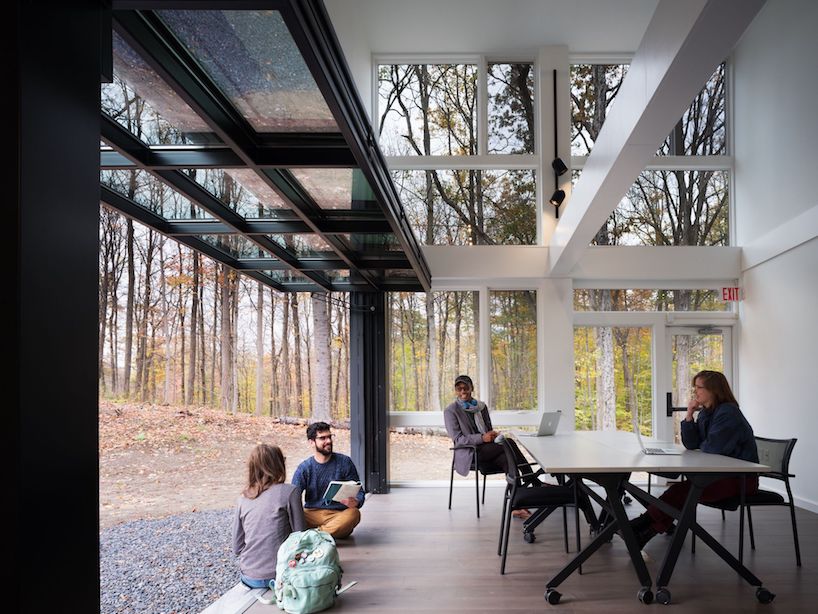 With an eye to both reuse and prefabrication, this Media Lab is made from four recycled shipping containers. They were installed in half a day in the middle of the campus, close to a Frank Gehry concert hall, completely finished as shown, and fully operational in a couple of weeks.

The double wide, double tall arrangement yields a 15’ wide, 17’ tall main space, and a second floor office. The project was prefabricated, delivered and installed in half a day. As a prototype, it offers schools and universities an affordable solution to their urgent classroom space needs, while providing flexible space for various programs and events. 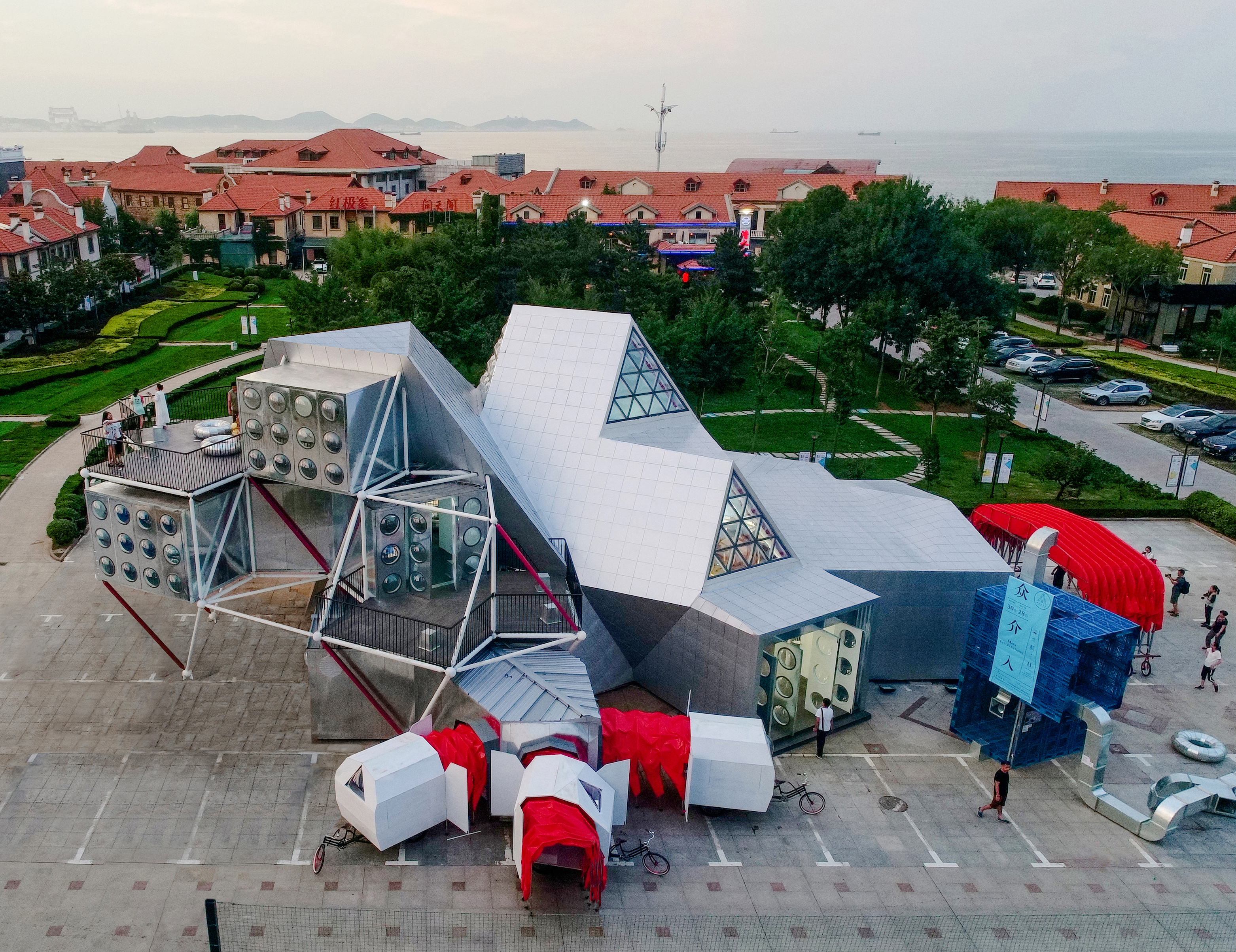 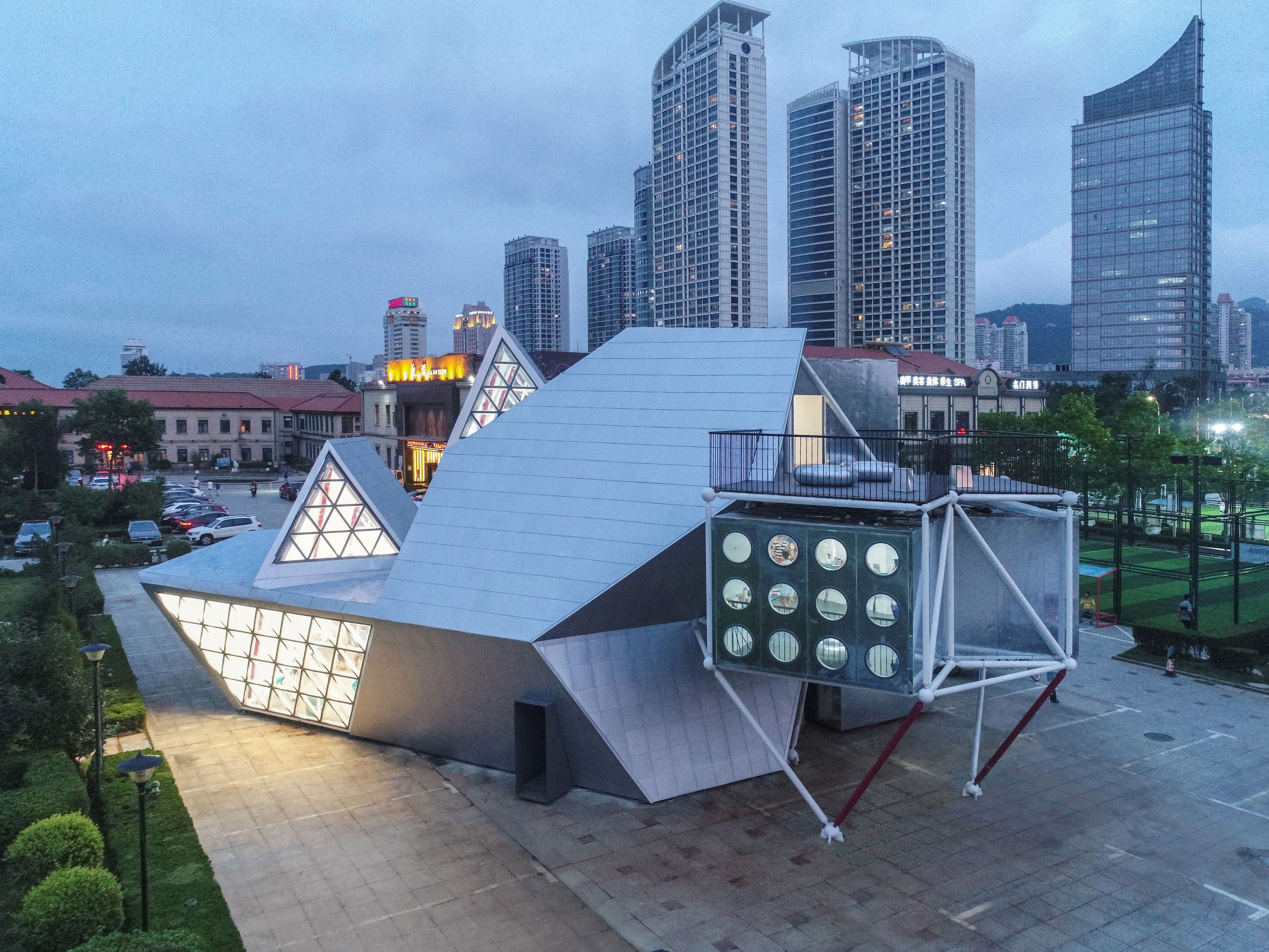 The People’s Station is a cultural center that was designed to reinvigorate the Kwan-Yen district of Yantai. The building is situated just beyond the edge of the business district. With large open entryways, semi-outdoor areas and sections lifted above the ground, the building acts as a nexus that invites visitors to explore the historic core of the city. The project followed an unusually tight schedule. With the use of a proprietary prefabricated system, the People’s Station was conceived and built in a total of three months. 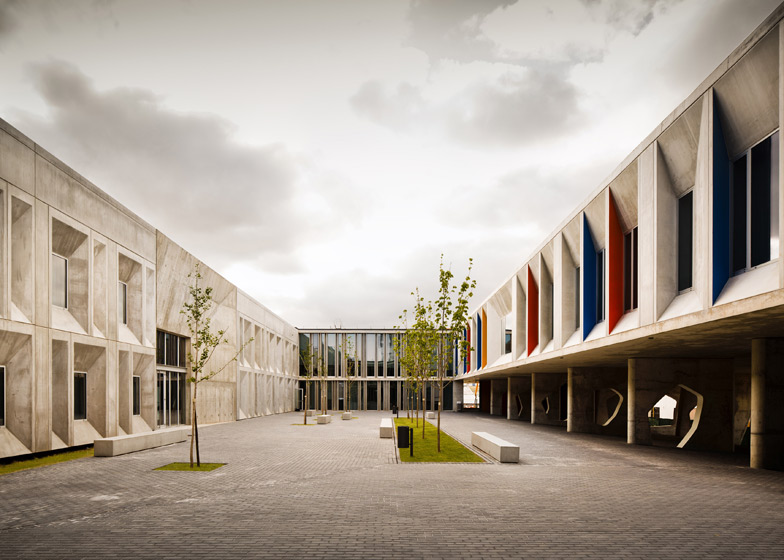 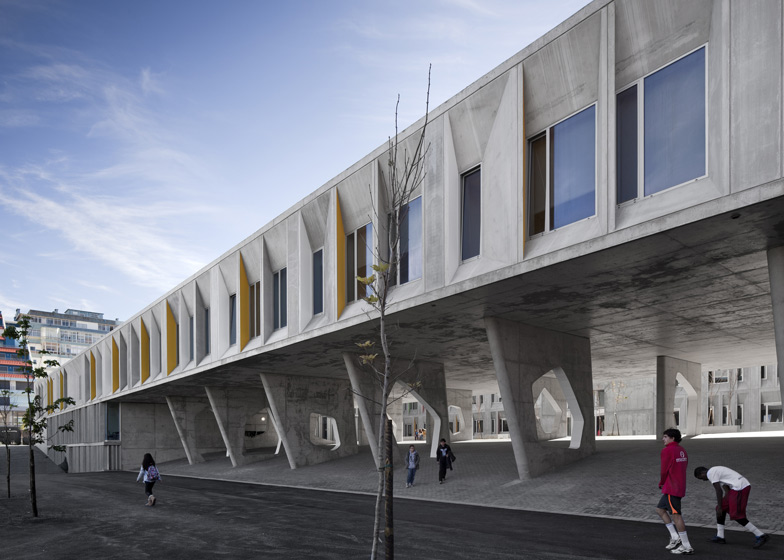 Rethinking prefabricated elements both new and old, the Braamcamp Freire Secondary School is located at the edge of the historical centre of Pontinha, Lisbon. The school is part of Pontinha’s urban fabric with the exception of its north boundary which faces an unconstructed valley. The School was originally built in 1986, with five standardized prefabricated pavilions. The project proposes to restructure the dispersed pavilion typology into one single building, to connect all the pavilions through interior circulation spaces. At the same time, the facades of the school are essentially constituted in exposed in situ concrete and prefabricated concrete elements, to minimize maintenance costs. 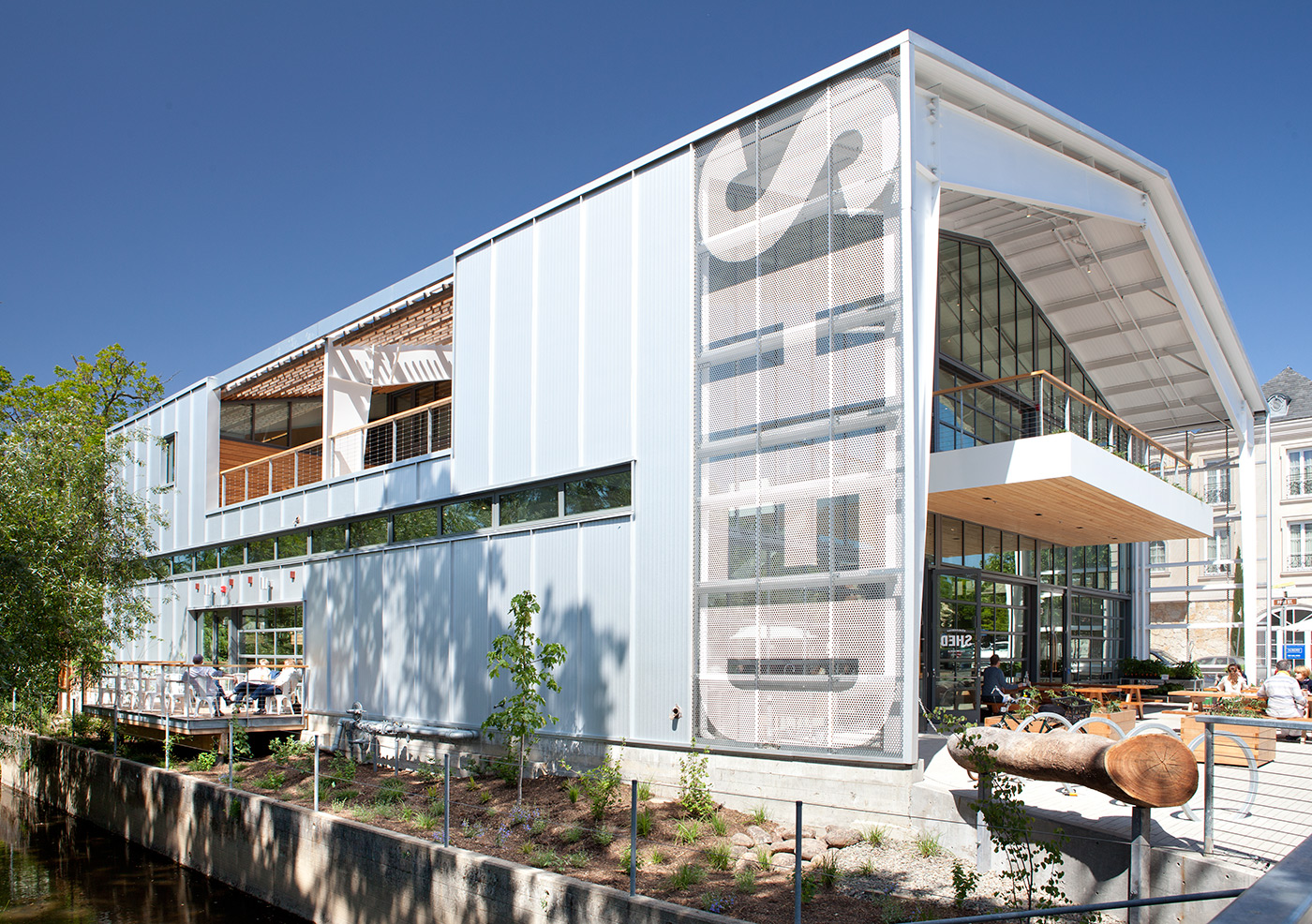 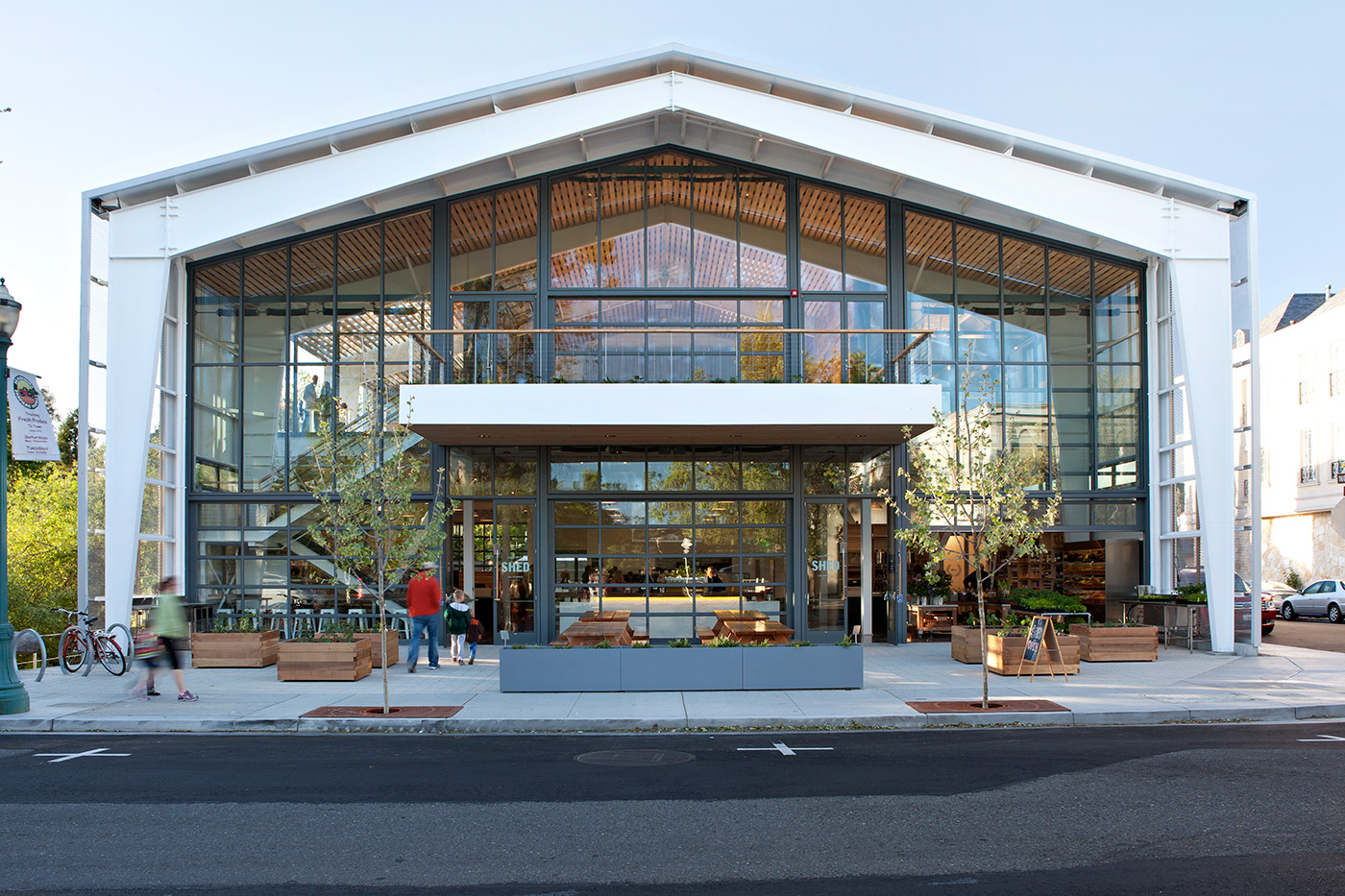 Pushing the boundaries of prefabricated design, The Shed was envisioned as a contemporary grange, where people come together to share food, stories and local knowledge. This modern interpretation of the traditional barn typology houses a market café, mercantile store, and meeting space. Sustainability is central to the design, which incorporates a resource-efficient prefabricated metal structure, thermally-efficient insulated metal panel cladding and naturally ventilated interior. Glazed garage doors on two levels open up the interior to the outdoors, connecting occupants to the urban life in front, and to the restored creekside riparian habitat along the building’s west façade. 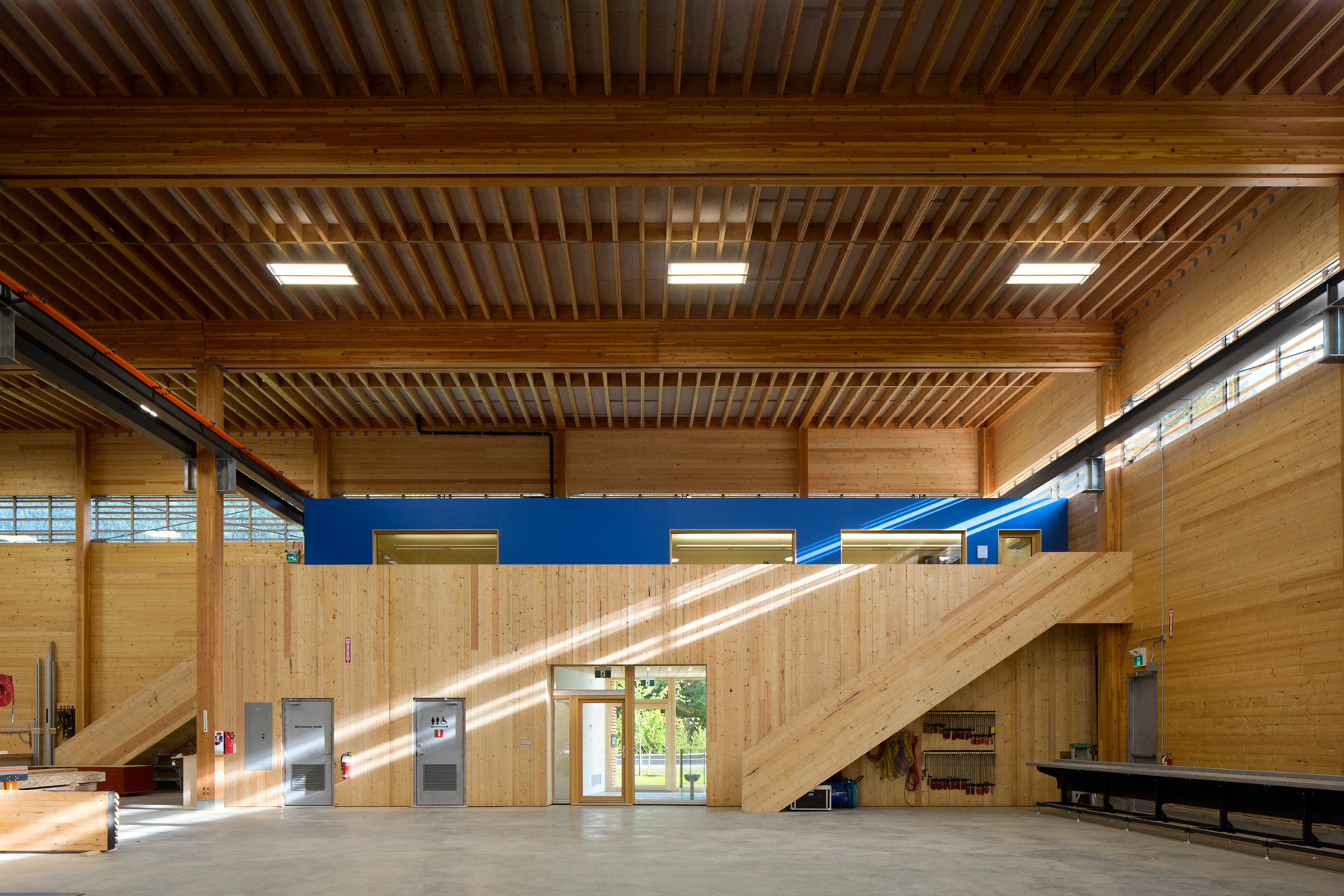 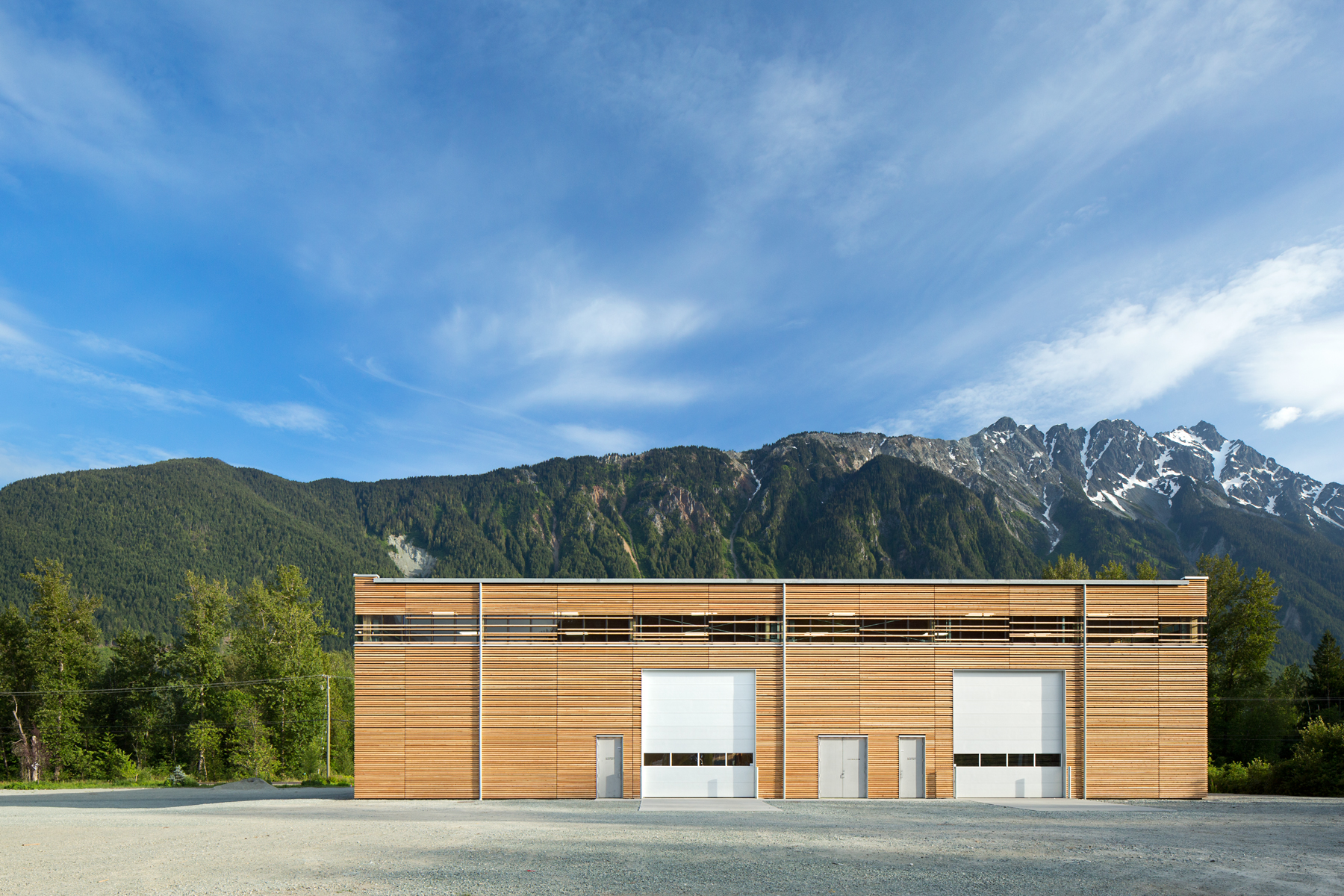 Designed to be a demonstration project, the BC Passive House Factory is an all-wood construction. The client mandated that the design and construction of their new facility must exemplify their investment in prefabricated wood design that is energy-efficient, healthy and sustainable. The main structure of the building is Douglas fir glulam post and beam, with solid wood (SPF), cross-laminated timber panel walls, all manufactured in British Columba. Using this prefabricated format, the building’s super structure went up in only eight days. 360-degree clerestory windows provide natural daylight and views to the surrounding mountains in the shop space.

As a mixed-use development, SUMMARY studio unveiled the VDC project using their prefab and modular building systems. The requirements for this project were defined from the beginning: the construction should be fast, cost effective and changeable over time, which prompted the studio to use prefabricated elements and to leave parts of the project undefined, assuming the immediacy, flexibility and resources optimization as core themes. The strategy was to create a ground floor level for the multi-services program connected with the public space, crowned by the individual units. The ground floor is shaped by prefabricated slabs and structural panels in the external perimeter.

How can architecture be a force for good in our ever-changing world? During Future Fest, we’re pose this question to some of the world’s best architects. We're hosting daily virtual talks from September 12th to 30th, which are 100% free to attend.  Check out the full schedule!