Photos have become ubiquitous in contemporary design. Taking three-dimensional space and making it two-dimensional, photography has transformed the way we understand architecture and landscape architecture across the world. More often than not, we experience new projects through photography and two-dimensional formats. For landscape architecture, photographers move beyond purely natural conditions to show us how design and culture impact the land. In turn, these images reveal relationships between climate change, aesthetics and what it means to be human.

Photography as we know it began in the late 1830s with Joseph Nicéphore Niépce. He used a portable camera obscura in France to expose a pewter plate coated with bitumen to light. This was also around the time that the earliest known evidence of a landscape photograph was taken, an urban landscape captured by Nicéphore Niépce. More advanced image control didn’t come until over a century later with cameras like the Asahiflex and the Nikon F camera. As smart models were introduced that managed shutter speed, aperture and focus, photographers focused on composition and narrative.

By 1991, Kodak produced the first digital camera used by professionals, and over the last 30 years, we’ve seen rapid advances across photography in everything from smartphones and filters to editing software. Now, photography has become democratized. Exploring the impact of images today, the following photographers capture landscape architecture and diverse relationships between materials, elements and light. While their landscapes are captured as static subjects through a series of photographs, their approaches reveal the dynamism and spirit of designed landscapes. The following images showcase how landscape photographers look for light and shadow, and how an image can tell powerful stories of place.

Marion Brenner is one of the leading photographers of landscape architecture. A resident of Berkeley, California, she has captured a variety of landscape designs. Just as landscape photography sets a mood, so too does her work showcase the dynamics of how we live. In OJB’s Sunnylands Center & Gardens, the design aimed to create a place of relaxation and discovery in a contemporary aesthetic. Working closely with the client, the intent was to welcome visitors to the grounds at a new exhibition pavilion and invite reflection in the surrounding garden spaces. Marion’s photos capture both the texture and rhythm of landscape architecture as it’s experienced by visitors, as well as incredible qualities of light throughout the site.

Marion’s work can also be understood through projects like Surfacedesign’s Uliveto. Located in the foothills of the Santa Cruz mountains, the Woodside residence design aimed to blur the line with the surrounding landscape and borrow vistas of the adjacent mountains. The main house is organized along a main axis and a series of pavilions recede into the landscape. Mitigating the site’s naturally rolling topography, a series of carefully inserted stairs, terraces, and walls negotiate the grades and create a canvas for a series of garden rooms. Her photographs invite reflection, a layering of landscape elements that showcases the design and capture depth, making the two-dimensional images feel immersive and almost like rich paintings of varied detail.

While not a pure landscape photographer, Jeremy’s work encompasses both landscape and architecture. He graduated with a degree in fine art photography from the Pacific Northwest College of Art in 1999. Afterwards, he worked in marketing and strategic planning in the architecture industry. His background in marketing, promotional materials and design spanned over a decade, and during this time he produced and assisted on photo shoots for photographers Richard Barnes and Helene Binet. These experiences led to the formation of working relationships with both photographers. Since establishing his own practice in 2010, his work has been widely featured in leading print and online publications.

In both Bittermann’s Bandon and Newburg photo series, the photographs capture powerful connections between people, landscape and architecture. Not only does the photography highlight these relationships, but it also embodies an atmospheric and immersive approach that brings viewers into the image. There are a combination of techniques at play in Bittermann’s work, and his eye for capturing light and form grounds a series of beautiful photographs that highlight design at its best. Other projects like the Polly Hill Arboretum Visitors Center and the Black Butte Ranch Pool House further showcase this relationship between architecture and landscape.

Landscapes take time to grow and adjust. In turn, the choices of designers and their attention to detail are highlighted by light. Atkinson grew up in Nevada City, California, where the trees, mountains and rivers instilled in her a love of all things natural. She has an idea for detail, and she studied photography at the California College of Arts in the San Francisco Bay Area. Her photographs have appeared in magazines, books and exhibitions in New York, San Francisco and Los Angeles. When not photographing, you can find her in the garden and enjoying the outdoors. Over the last ten years, Atkinson has worked as a freelance photographer of gardens, interiors and still life.

Caitlin’s photographs have appeared in national magazines: Gardens Illustrated, Elle Decor, Dwell, Martha Stewart Living and Architectural Digest, among others. Two different projects by landscape architects Terremoto showcase different ideas and approaches in her work. Los Feliz Towers implies movement and circulation, pathways through landscape architecture, as well as a particular focus on foreground that draws in the viewer. In the Nicasio project, mounds of earth are criss-crossing mounds of piled-high dark brown soil. Wisps of grass sit atop the mounds and are connected by the landscape architecture. Caitlin’s images of the project capture the golden atmosphere and seemingly otherworldly light, while very subtle indications of elements inserted into the landscape reveal themselves throughout the photo series. 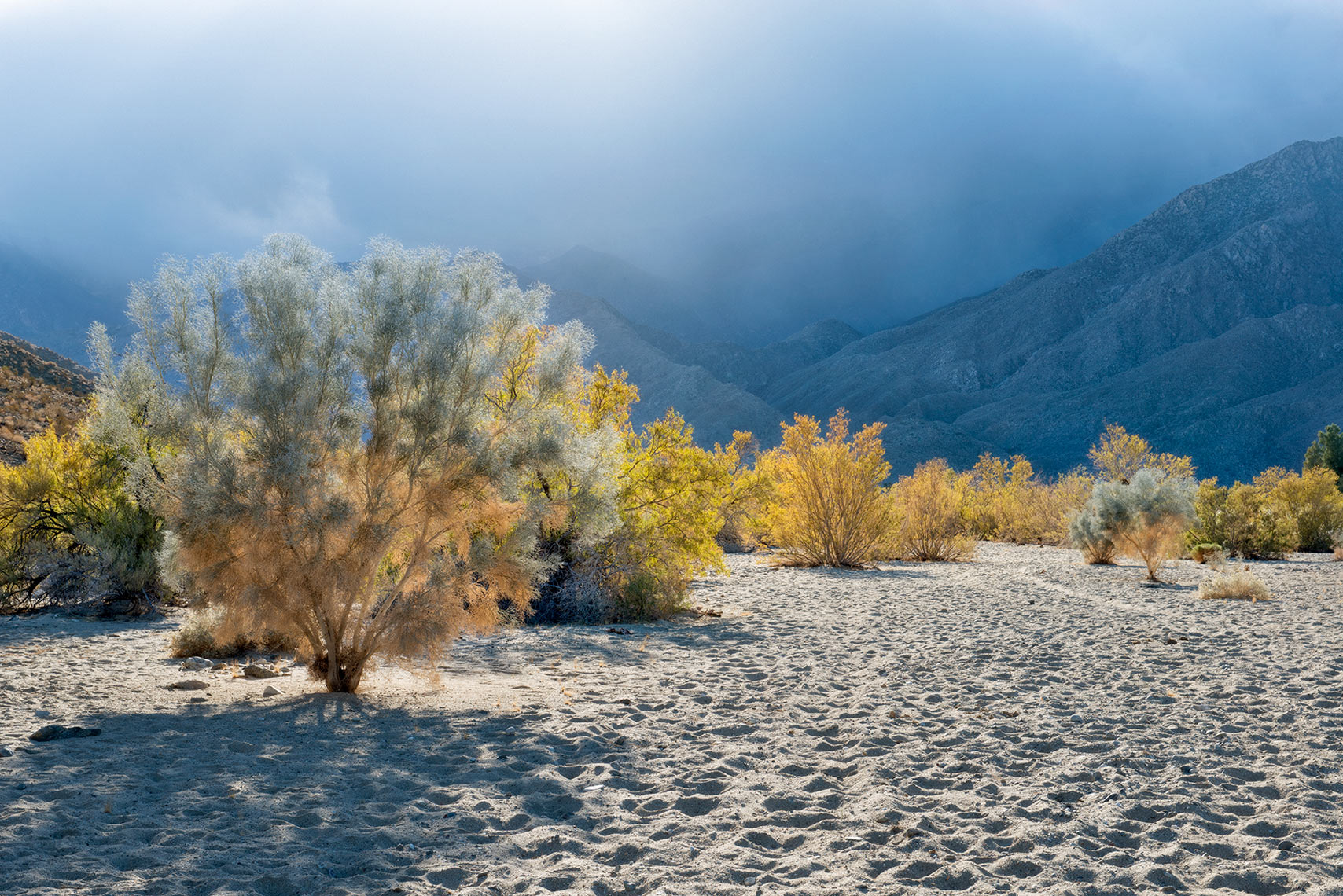 Working since 1990 as a commercial and fine art photographer, Millicent Harvey photographs landscapes because she connect to the subject matter and brings that connection to each new project. Born and raised in Boston, Millicent is now located in Palm Springs and works nationally. She attended the Art Institute of Boston, Lesley University and has taught at the New England School of Photography. Her clients are far-ranging, from landscape architects, architects, designers and landscape contractors, to regional and national publications and across the field of agriculture. As she notes, images are often the first way people will experience a place — whether online, through publication or award consideration. 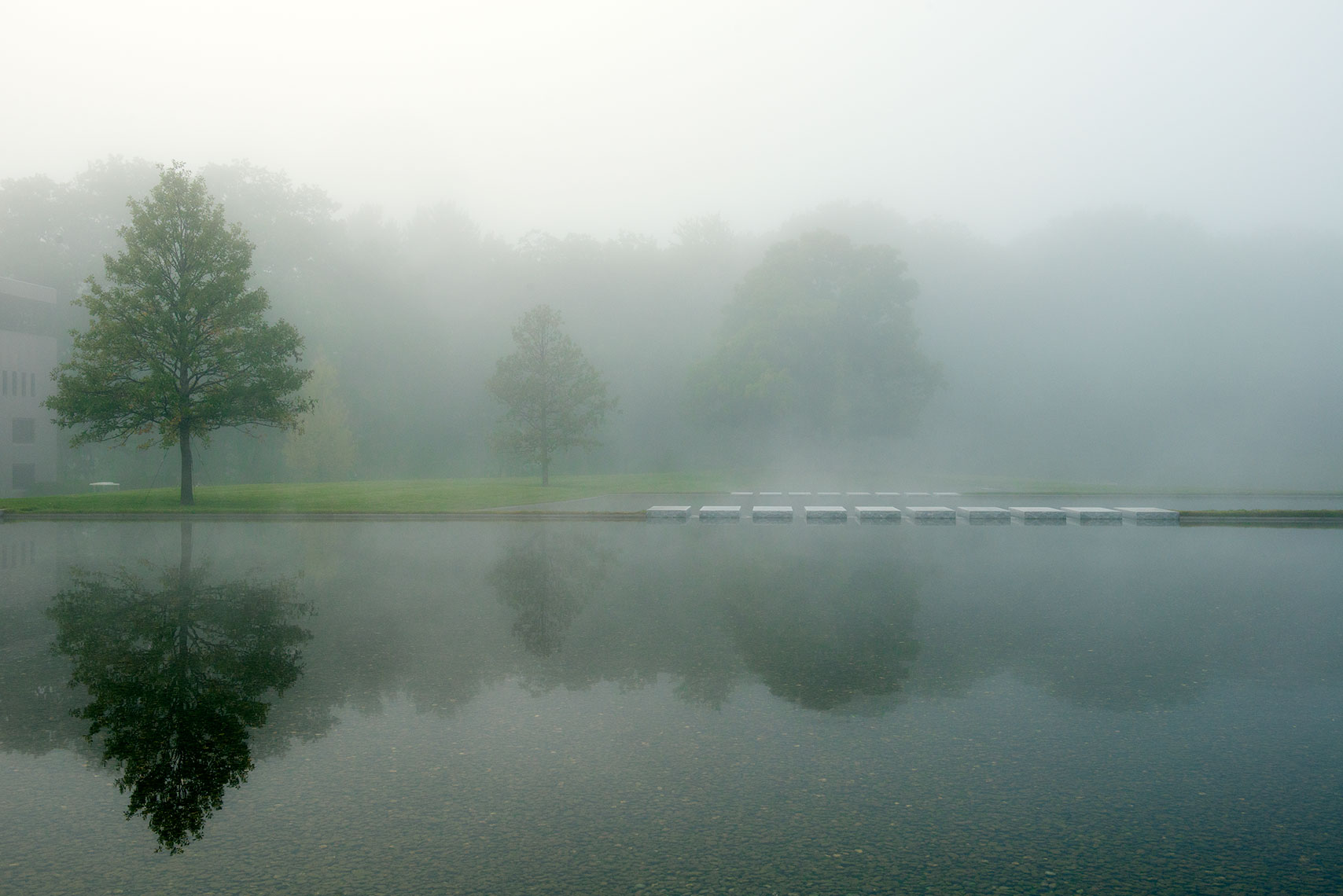 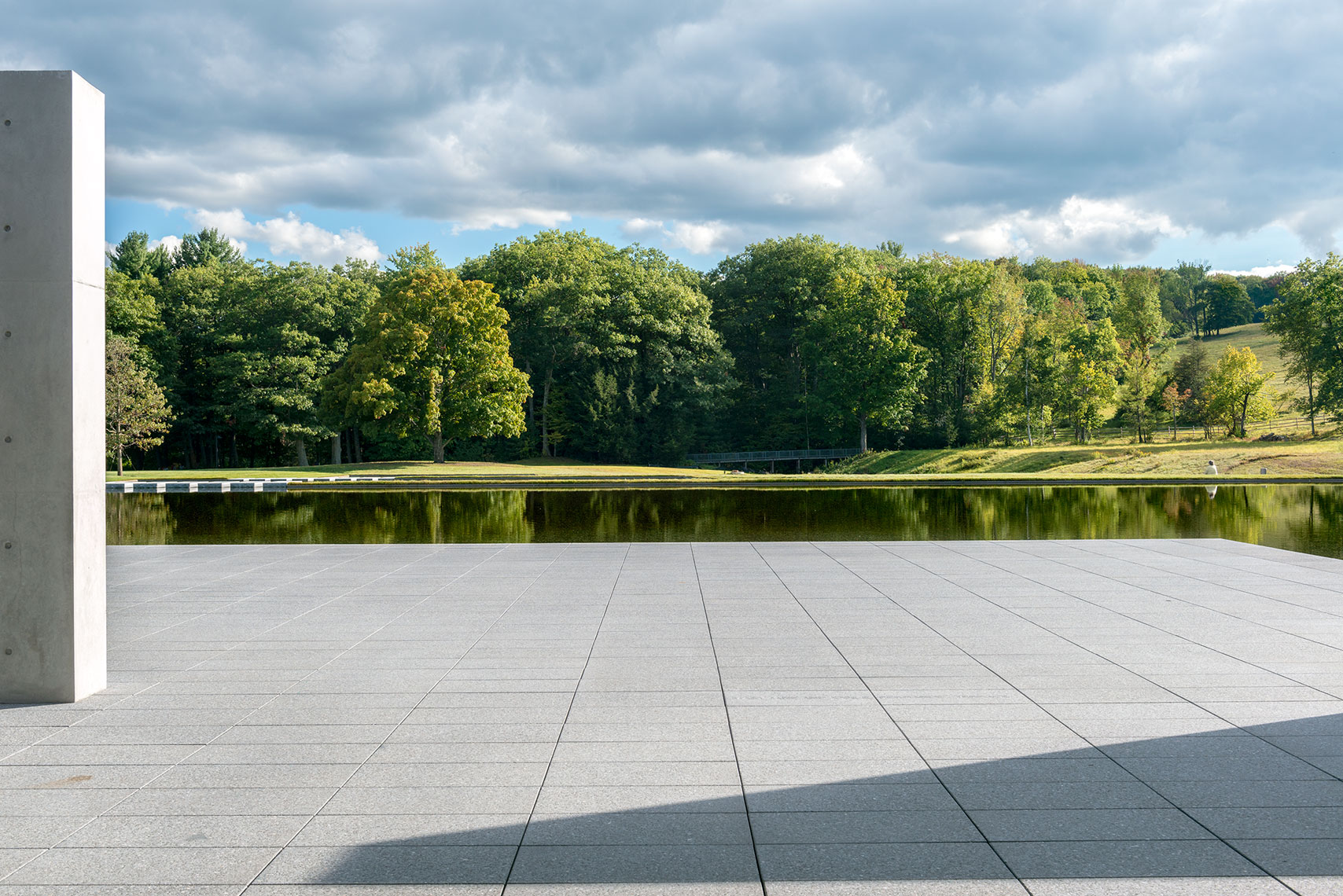 Millicent continues to draw inspiration from her immediate surroundings in the American Southwest, as well as exploring how commercial and fine art photography inform one another. A series that highlights Millicent’s attention to the nuances of landscapes is her work documenting the grounds of The Clark Art Institute in Williamstown, Massachusetts. The Clark’s entire 140-acre campus is renewed and enhanced by the introduction of four miles of new walking trails, five new pedestrian bridges, and more than a thousand new trees. The focal point of the landscape is a set of tiered reflecting pools designed by Reed Hilderbrand with cascades, lawn embankments, and stepping stones to knit together the inner campus with Stone Hill Meadow, the Christmas Brook, and its wetlands. Her images convey a sense of place through light and shadow, texture and movement.

Landscape architecture extends to far more than vegetation and planting. From hardscapes and plazas to streets where people come together, photographing the built environment requires a range of perspectives. James Ewing is an artist capturing architecture, landscape architecture and scale models. Influenced by the tradition of architectural drawing, his works reference those of Hugh Ferriss, Ken Adams and Frank Lloyd Wright. As he explains, he is inspired by stories of the built environment, as well as the collaborations between designers and photographers. He sees his work as illustration, bringing the vision of designers to life through images that illustrate concepts and ideas. 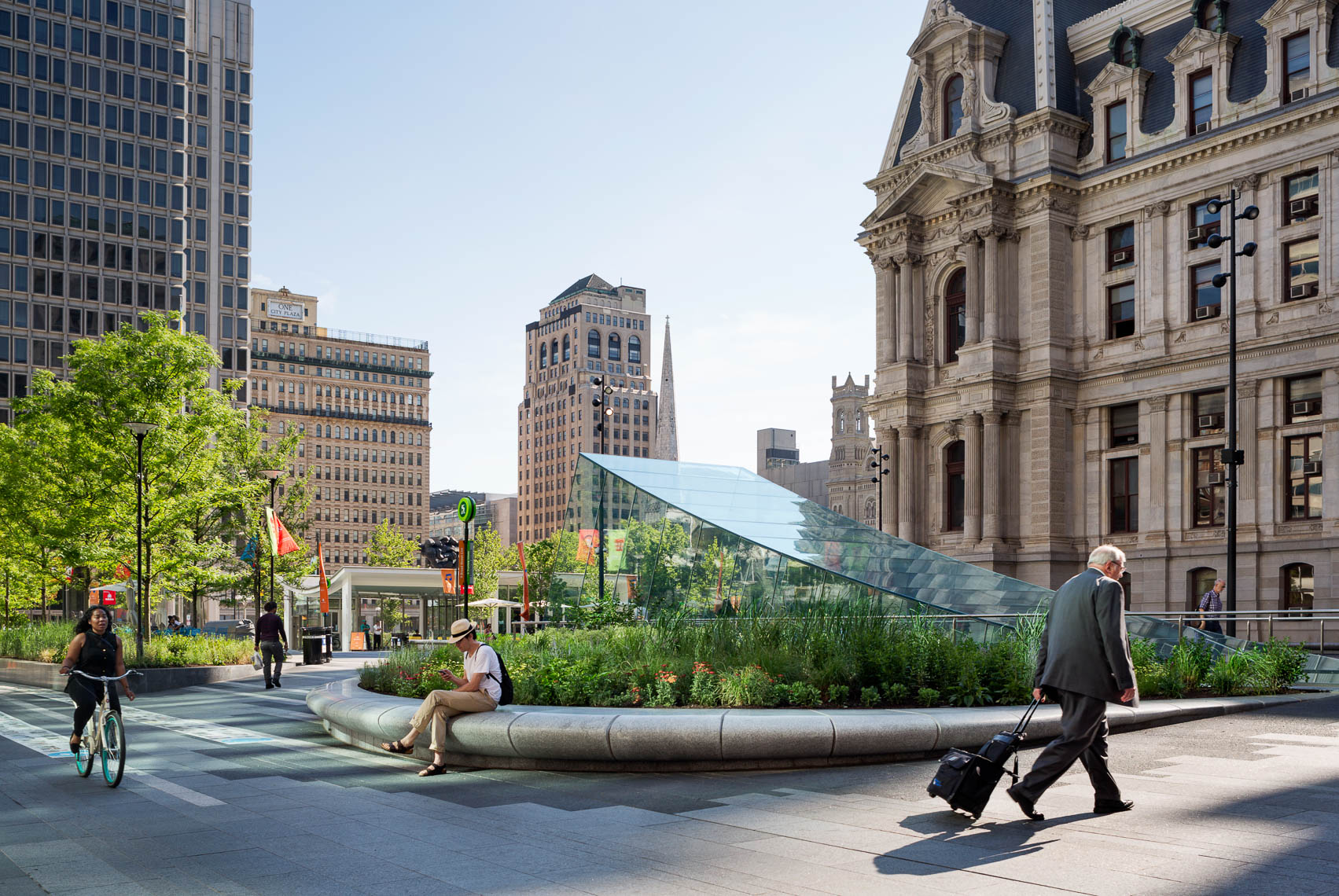 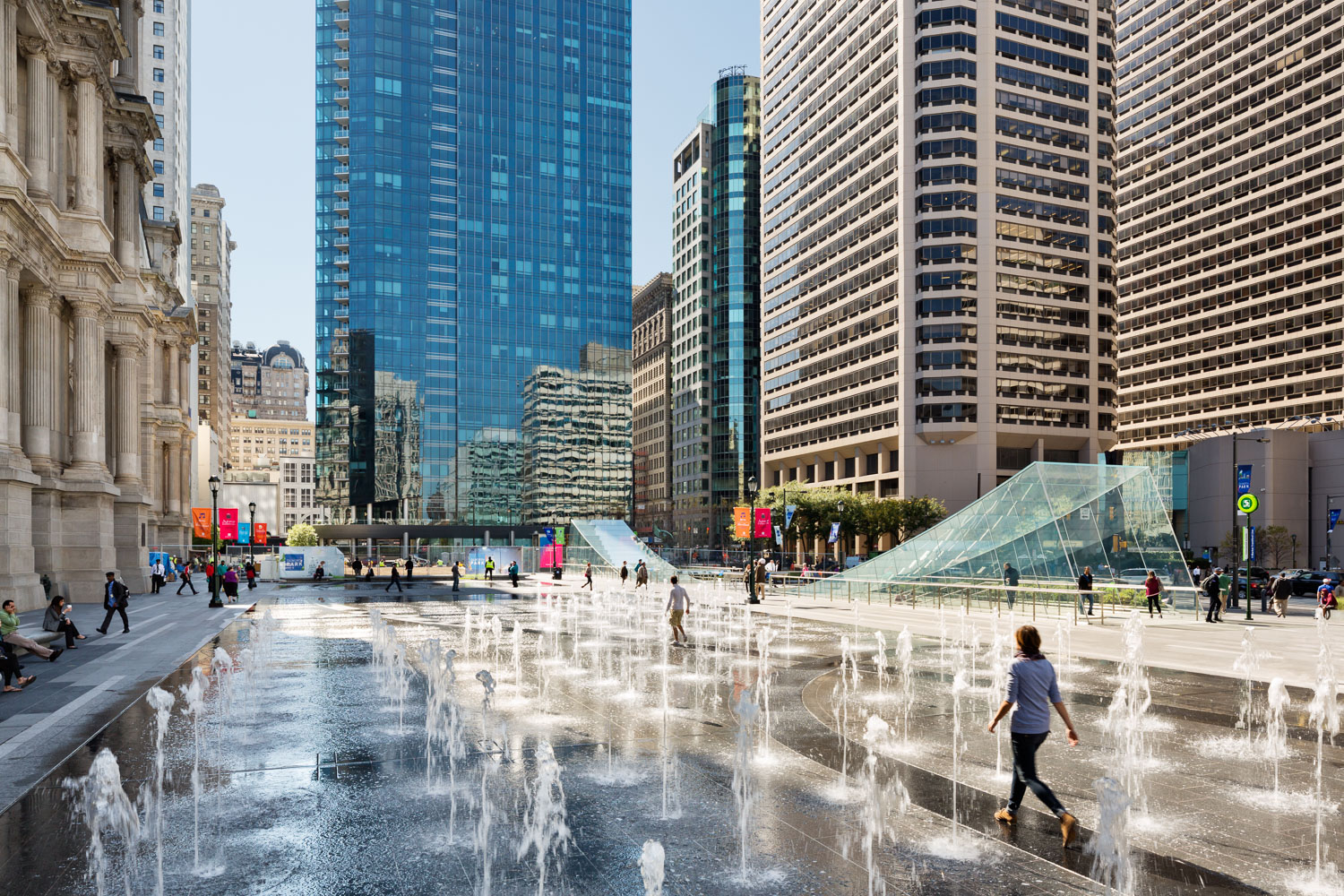 Dilworth Park at Philadelphia’s City Hall is a lively and contemporary embodiment of William Penn’s vision for Philadelphia as a ‘Green Country Town.’ Today the park is an inclusive hub of Philadelphia’s life outdoors and James was able to capture the spirit and dynamism of the park through his work. OLIN collaborated with Urban Engineers, KieranTimberlake and CVM Engineers to create this vibrant public space. His images illustrate how Dilworth Park is both a relaxing refuge in Center City as well as a destination for major events. His series of photos also show how the universally accessible common plaza was made to eliminate stairs and walls. The new design brings the entire plaza to street level to create the contemporary public space.

What started as an invitation to work on Frank Lloyd Wright's Imperial Hotel in Tokyo blossomed into 5 decades of architectural innovation in Japan.