Barcelona is a city that fuels imagination. From the celebrated architect, Antoni Gaudí, to the works of Casanovas, Montaner and more contemporary designers, the City of Counts is home to incredible works of otherworldly architecture. One of the world’s most picturesque cities, Barcelona juxtaposes sandy beaches and historic food markets with skyscrapers and Cerdà’s iconic Eixample grid.

Seen through a photographic lens, the Mediterranean city and its architecture pop due to the strong contrasts of brightness and shadows. Today, photographers are exploring Barcelona’s atmosphere and golden light to showcase architecture in new ways.

Interestingly, the first photograph of Barcelona itself is shrouded in mystery. Taken on November 10th in 1839 from a terrace of Pla de Palau by Ramon Alabern, it showcased an urban and architectural image of the city through the public plaza. Since then, photographers continue to understand how light shapes space and experience throughout Barcelona, especially by emphasizing strong contrasts of light and dark known as chiaroscuro. In an effort to better understand the relationship between photography and the city, curator Jorge Ribalta launched the exhibition Barcelona. The metropolis in the age of photography in 2016 which revisited 144 years of images produced in and by Barcelona.

The exhibition compared and contrasted the official image of the city — beginning with Ramon Alabern’s immortalization of the Pla del Palau on daguerreotype — with the way it presents itself to the outside world. The exhibition explains the six major periods in which Barcelona has produced iconic landmarks, and in turn, the ways people can understand photography, architecture and light in the city today. The following projects showcase architecture across Barcelona and how photography is being used to create imaginative images of modern designs. 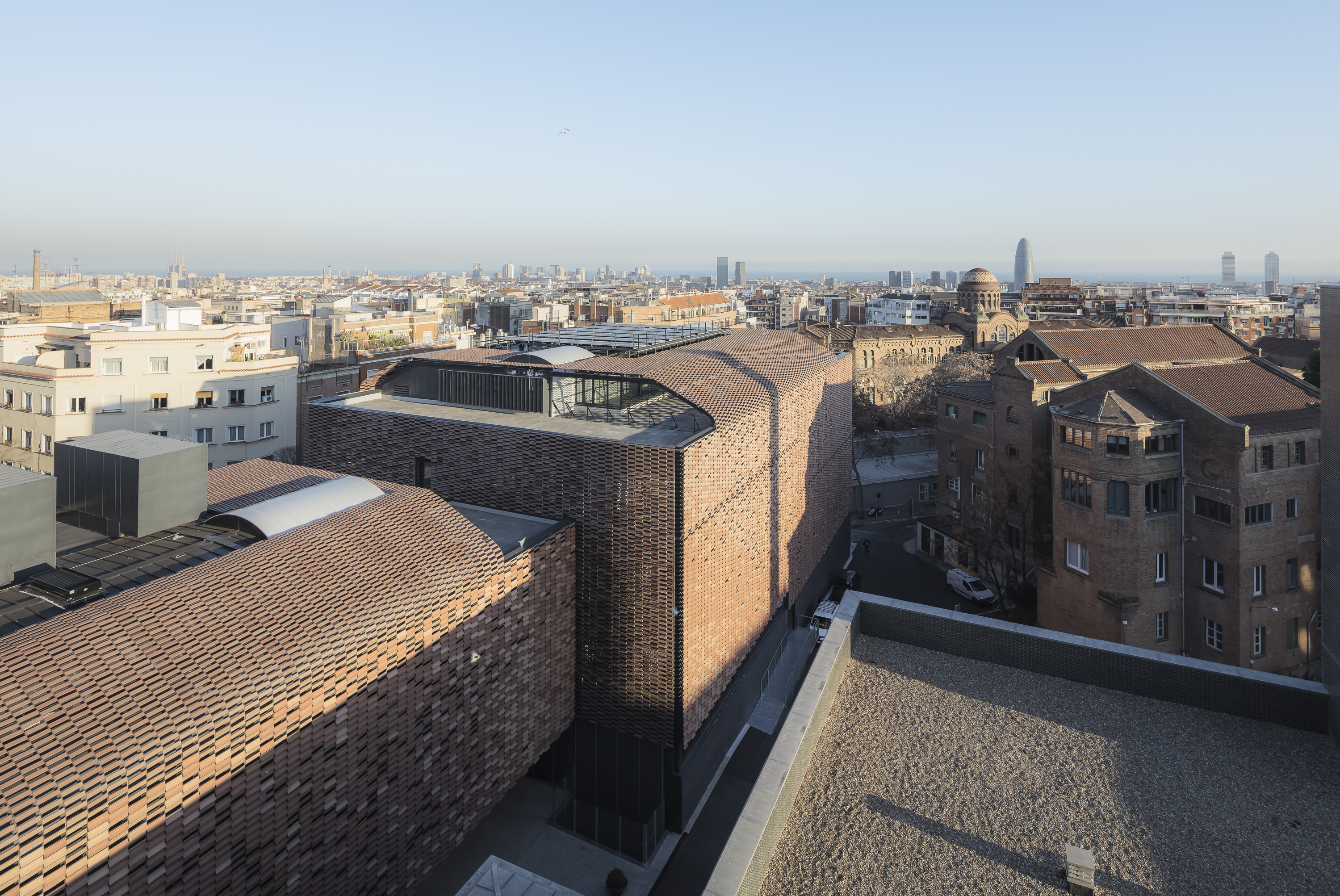 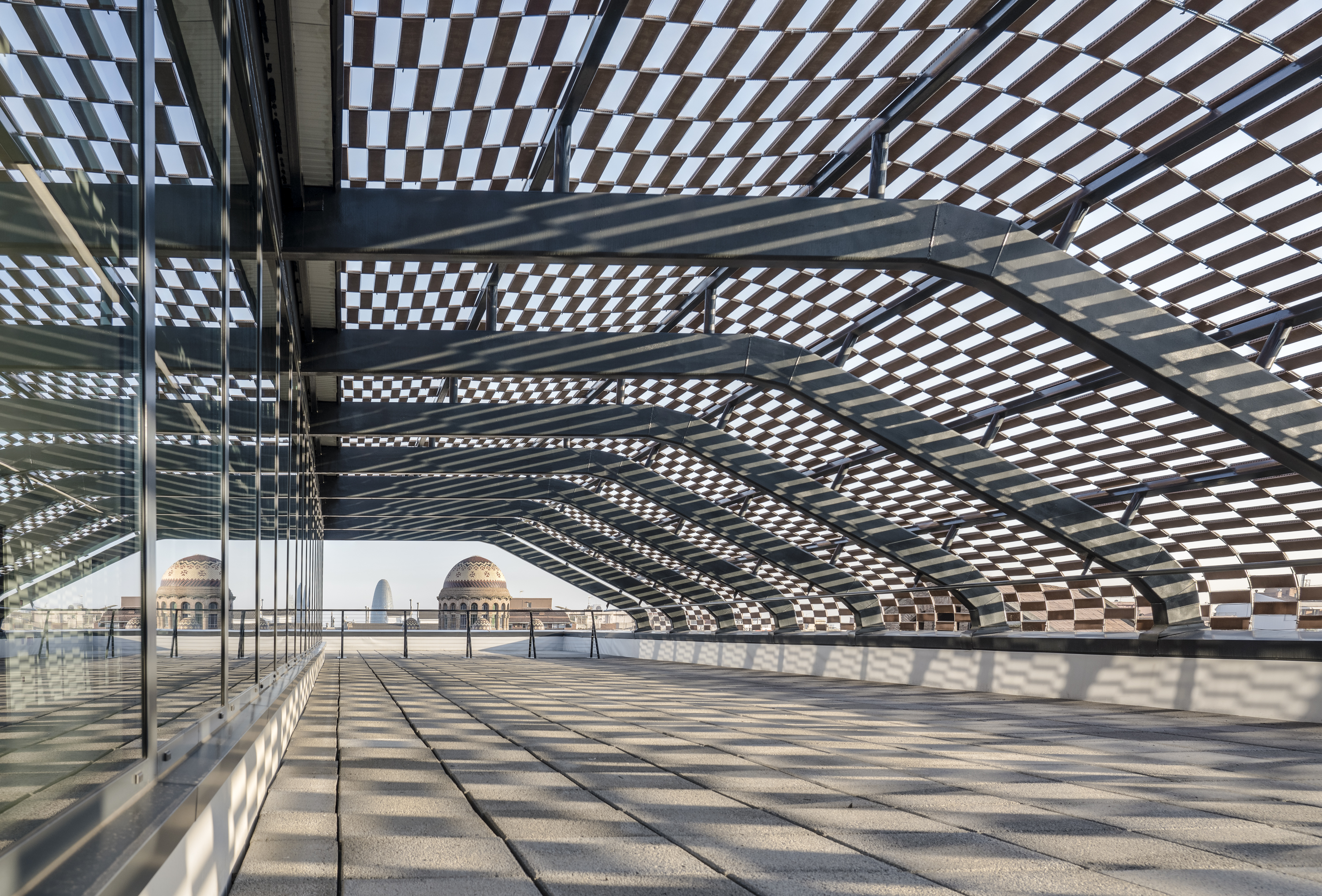 This research institute building is organized with clear geometric volumes that act as mediators between the city’s road layout and the hospital. Based on sandwich panels, the façade is simple and efficient. These panels are protected by a technological ceramic skin as a latticework, with the same chromatic range as the historic pavilions of the modernist hospital.

This architectural skin produces a drastic reduction in energy demand (in a building with very significant thermal internal loads). In turn, it allows the entry of natural light and views and guarantees privacy to researchers. Photographs of the building showcase how light plays out along the façade, giving a textural quality and shaping the experience inside. 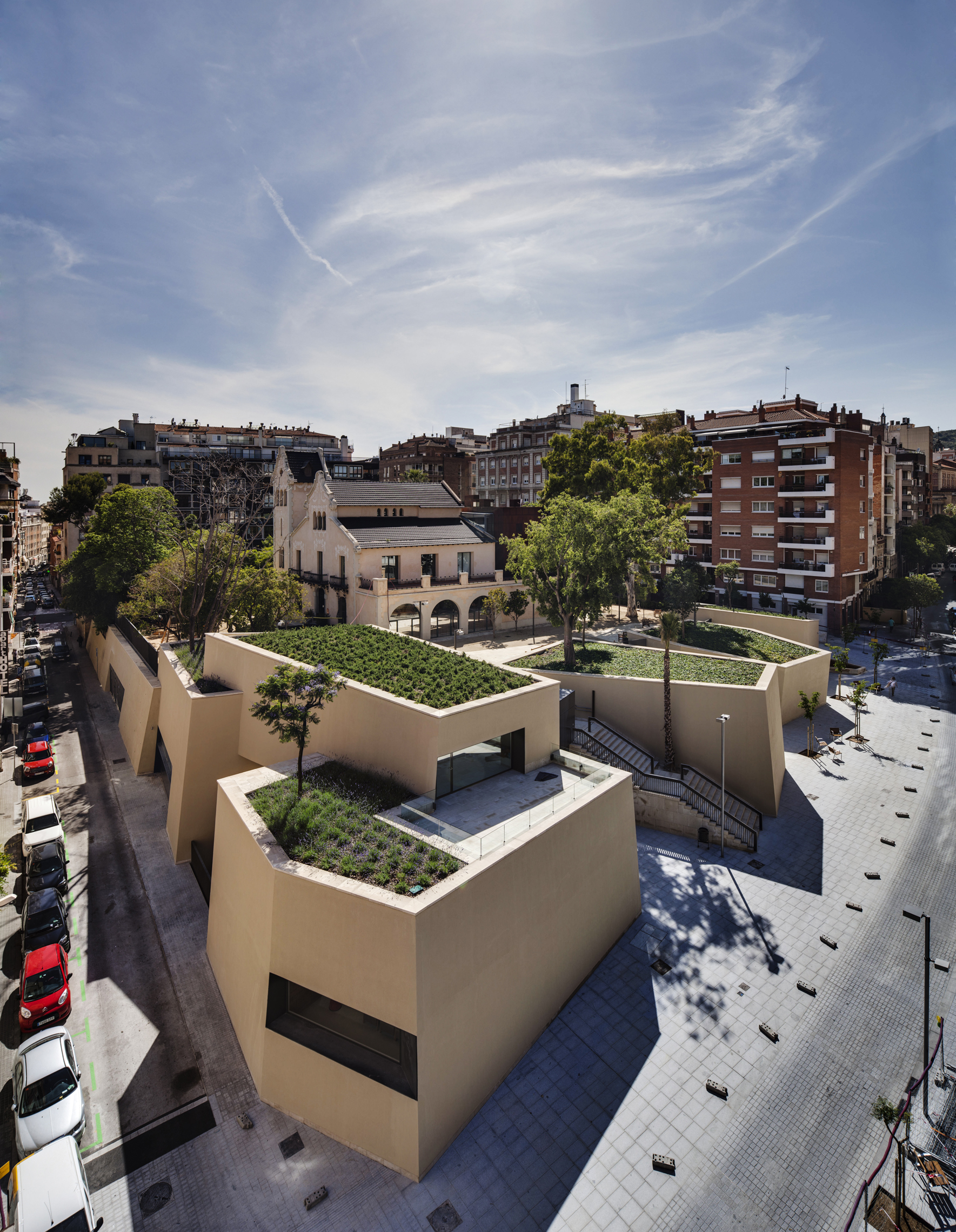 The architect’s central decision was to construct this new library building under the older, existing garden and not to occupy a part of this space. On the contrary, the designers sought to maintain and improve the existing garden while simultaneously providing joyful and well-lit spaces.

The building is shaped by “light and silence patios” and “books and knowledge patios”. The first, surrounded by glass and light, ventilate the interior while isolating the library from the street. The second, solid prisms filled with books, are part of the supporting structure of the library. Among the courtyards and the volumes, indoor reading and work spaces take shape. 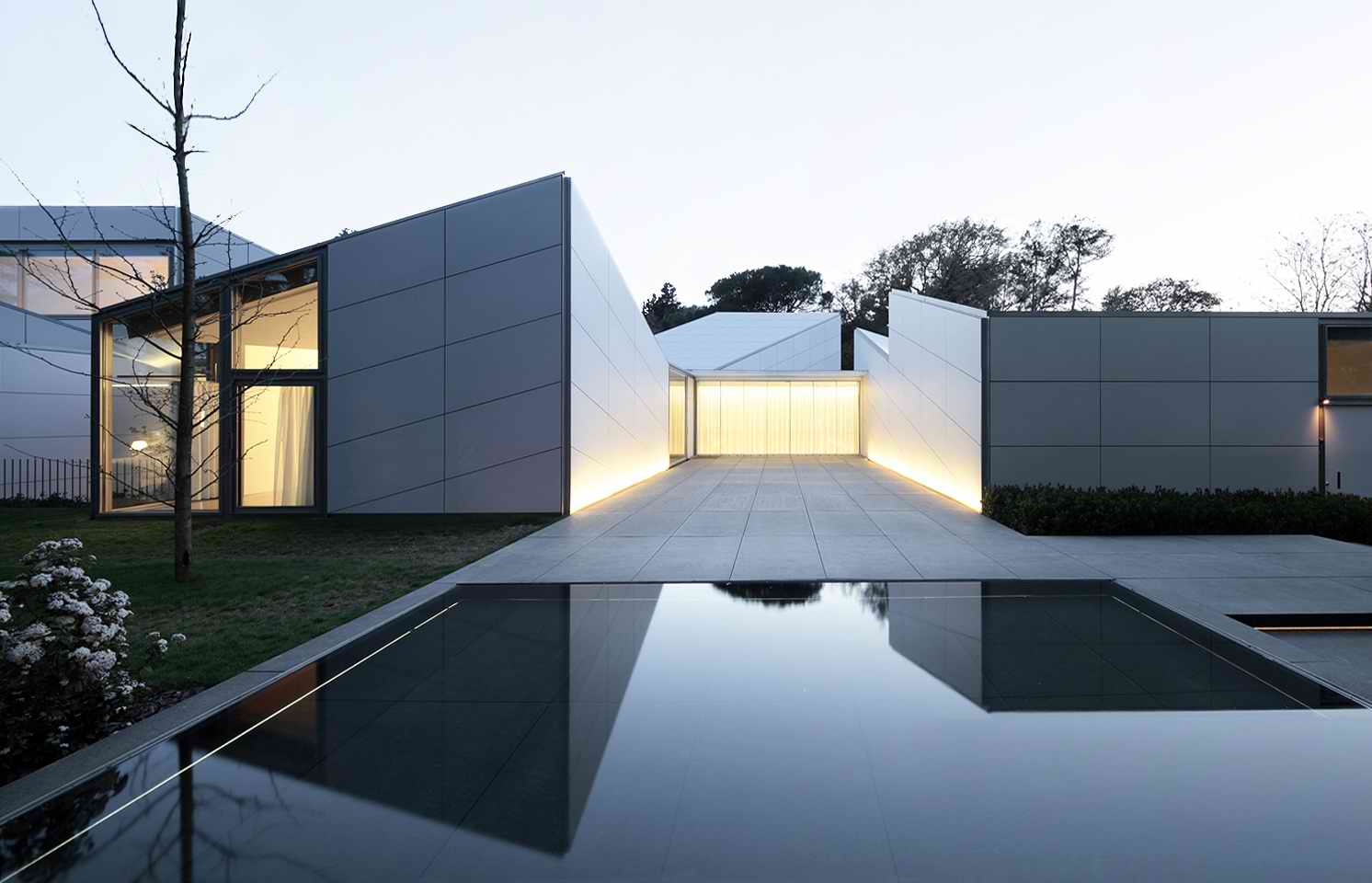 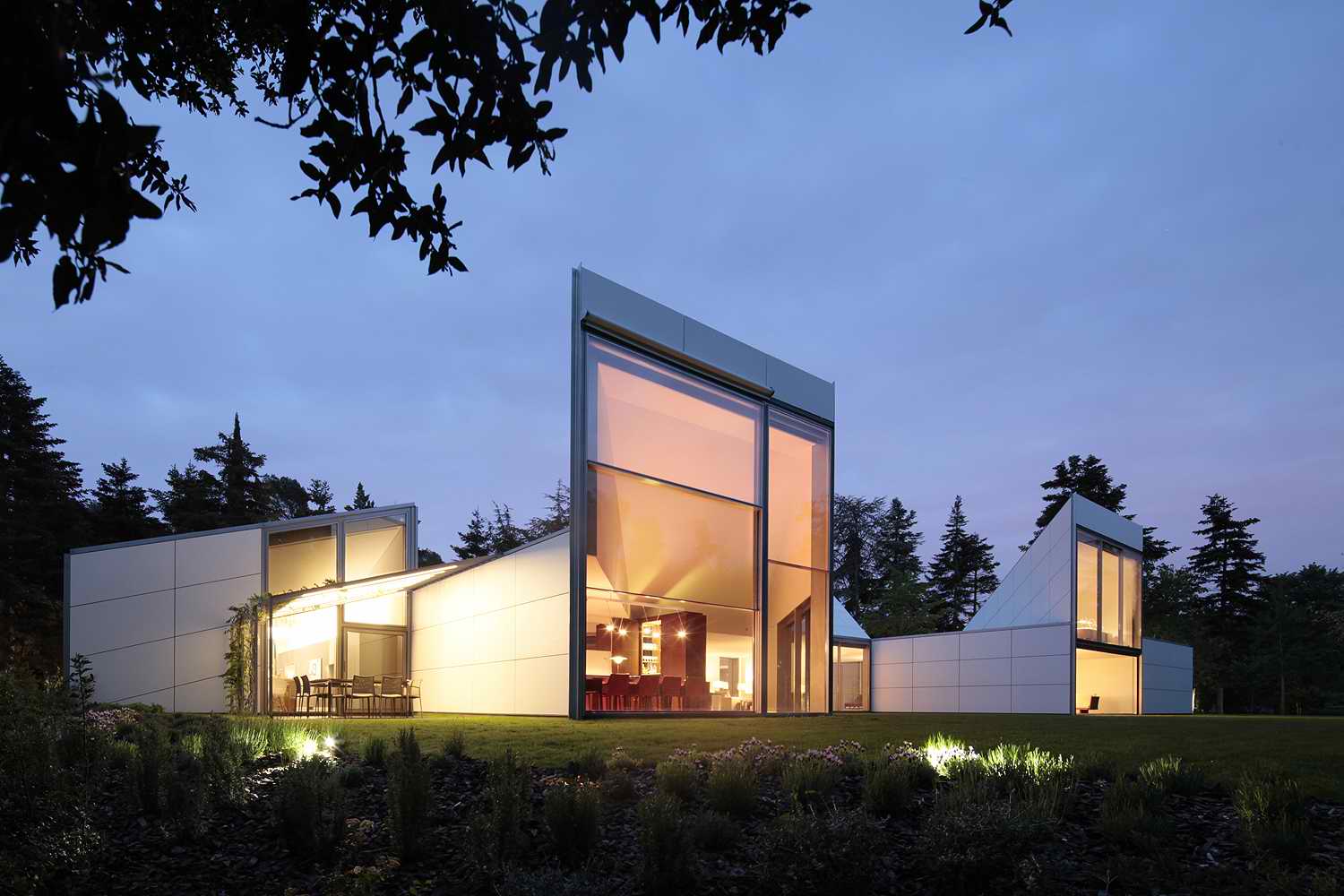 Sited next to a forest, the house rises from the road as a series of sloping roofs among the trees in the garden that form a belt of picturesque scenery. On entering, the house greets visitors with a pool of water. From the inside, rather than a house to stay in, the space announces itself like a large camera. This sensation owes much to the orthogonal floor plan, perceived as diagonality and dynamicity; the cross section develops into inclined volumes capturing views of the landscaped garden and of the distant landscape beyond, incorporated into the landscape surrounding the house. The photographs showcase the house in different times of day and how light changes the way the architecture is perceived. 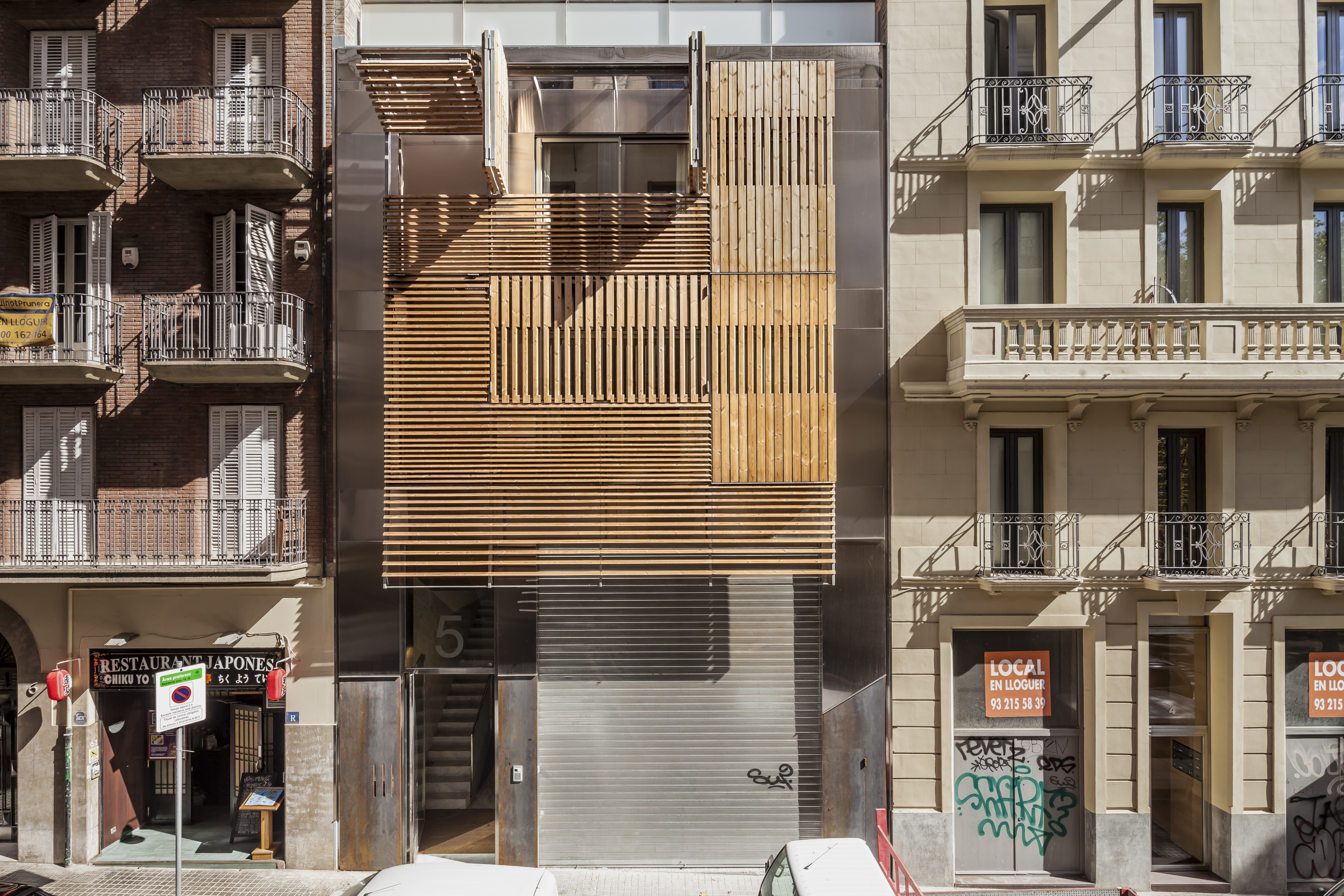 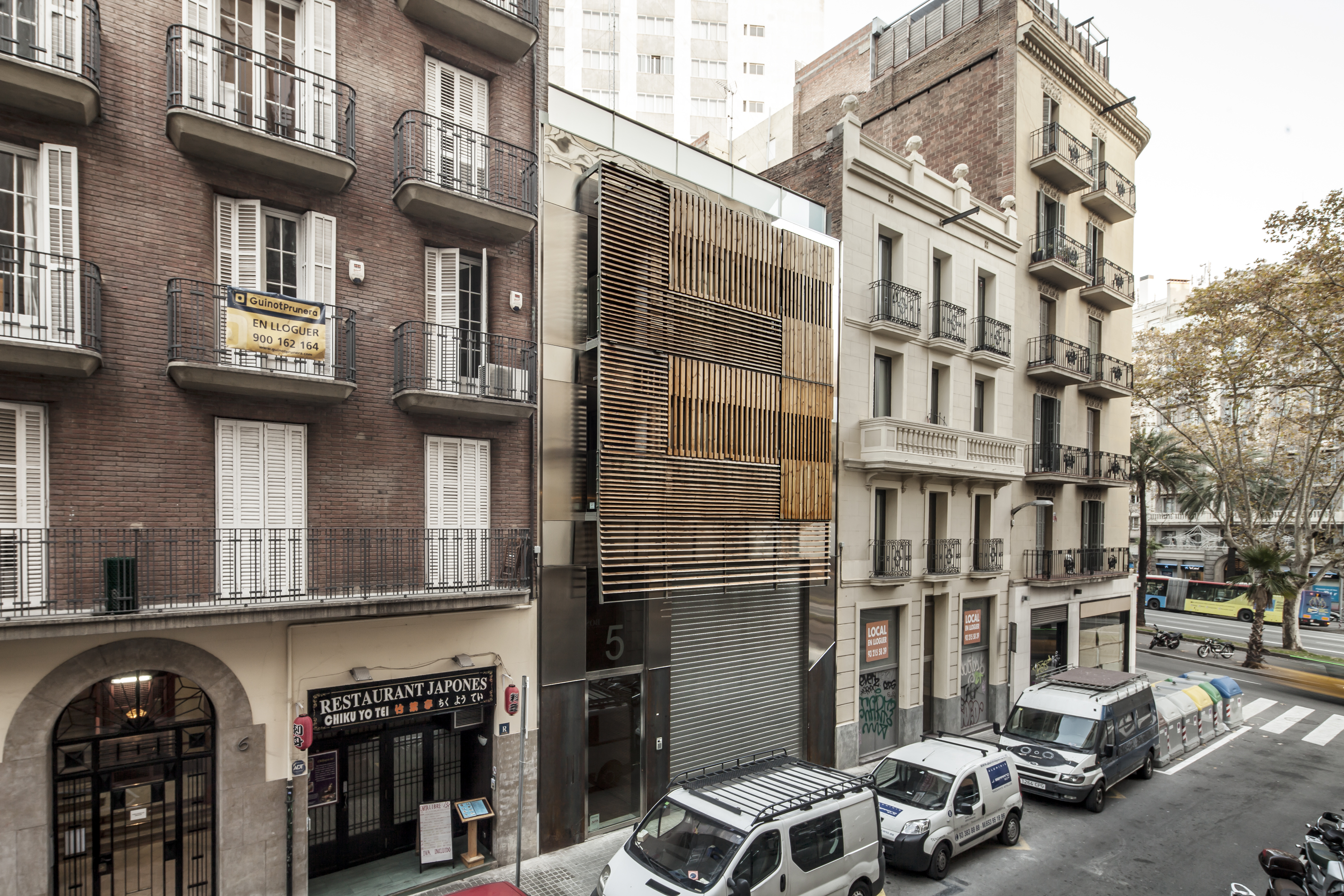 In an effort to play with light through a veil, Mateo Arquitectura created this modern residential building design. As they note, by accommodating domestic life in the dense central city, architecture has to veil and control pure transparency. The design along the exterior features thick walls and balconies. The team wanted to work with lightweight elements, so they designed the façade as a succession of layers: one interior, of glass and stainless steel, and another exterior, close to it, of wood that opens and closes at will. This screen protects the residents from noise and inquisitive eyes, while also acting as a filter between inside and outside to give the building an urban image. 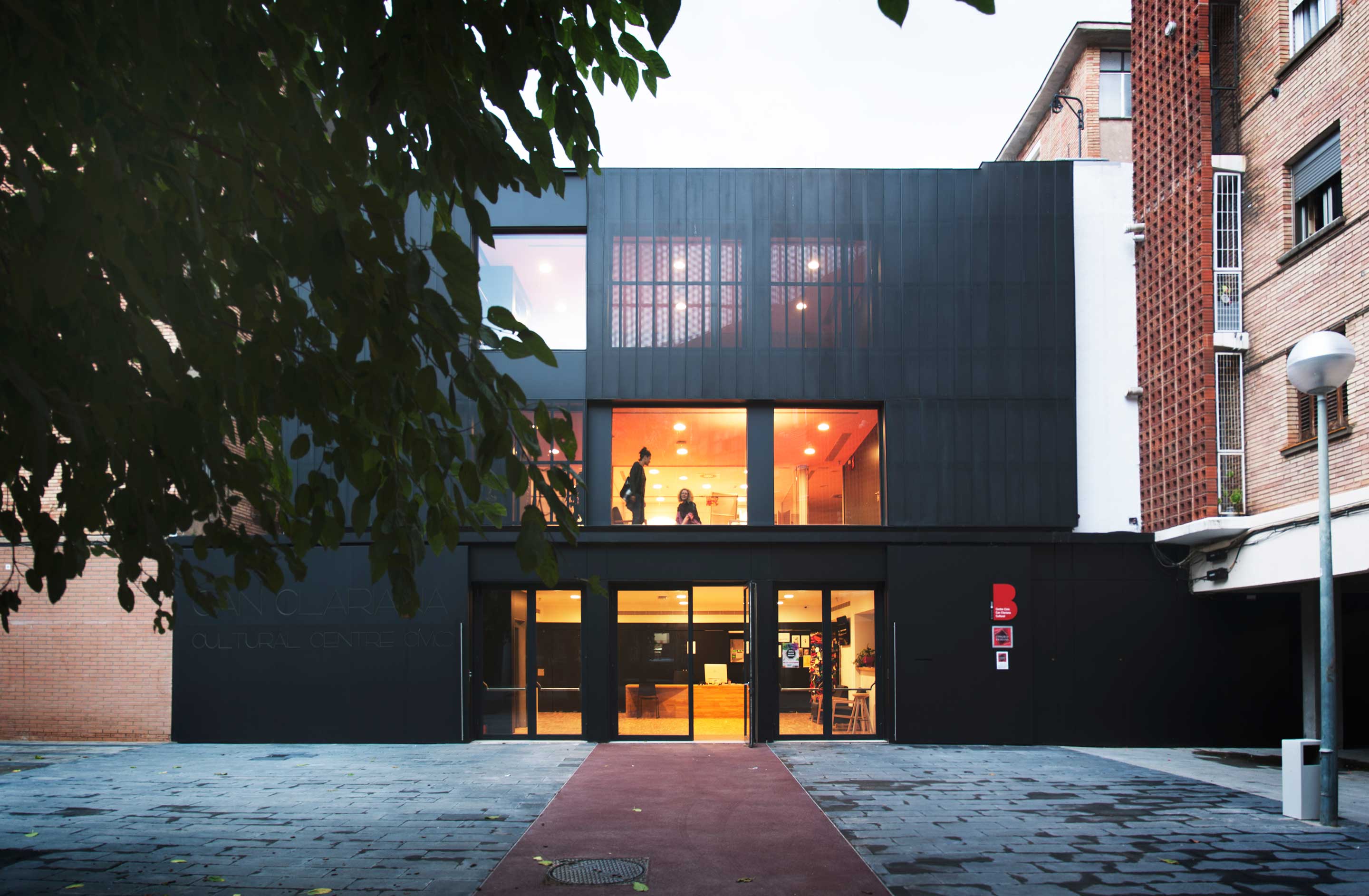 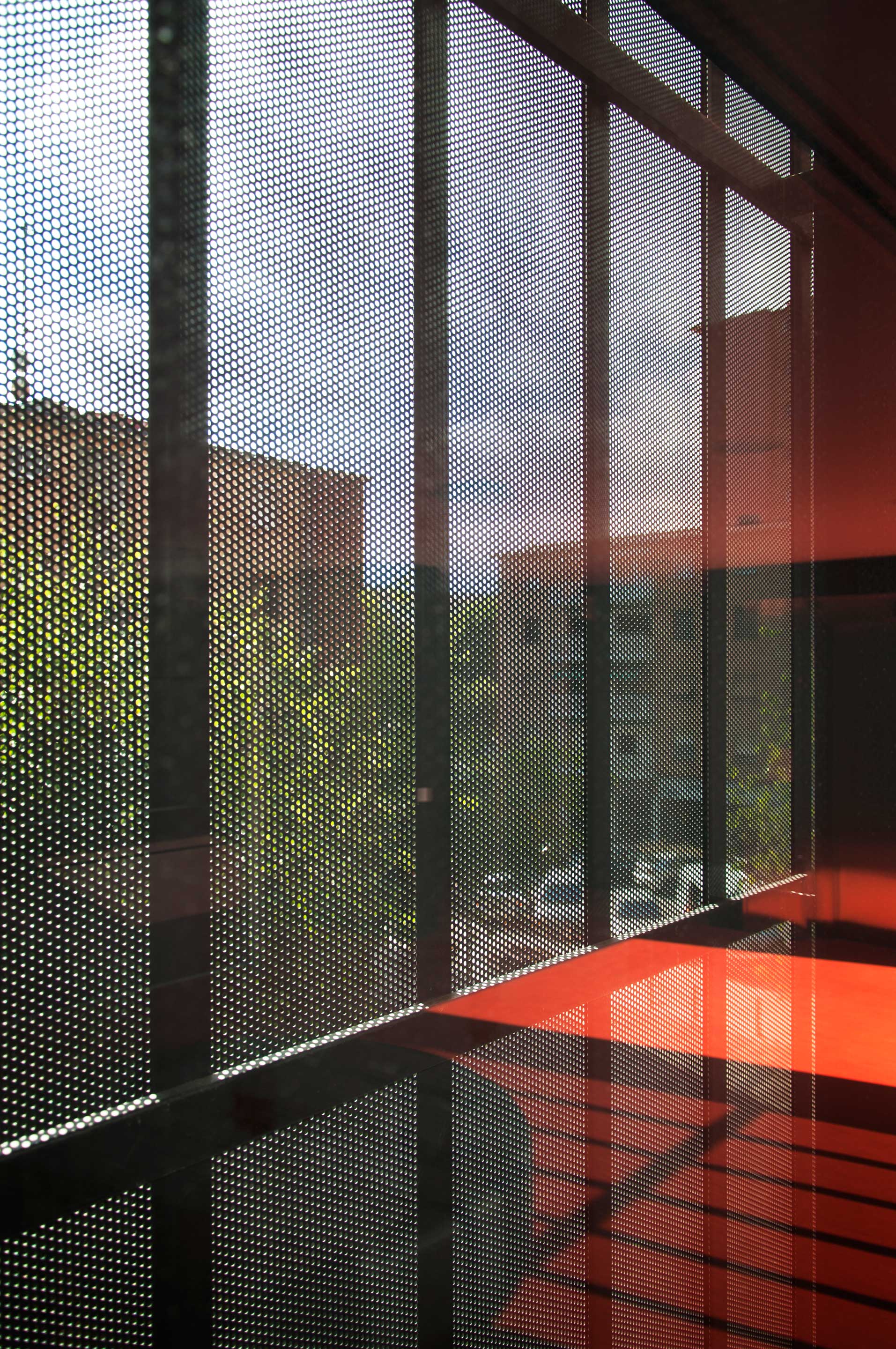 This new community center replaces a medium sized old theater in the Congrés-Indians neighborhood which became obsolete due to deterioration. The new project is an austere and rational construction that utilizes simple materials. This neutral architectural approach to the multipurpose space is strategic; it foregrounds the social and cultural activity inside and public space on the exterior. The theater is designed as a simple unitary volume located between buildings, leaving one side overlooking the square. From the point of view of the building image, it is conceived as a large vertical façade of two stories which orders the irregular openings inside, while the sidelong dividing walls are understood as cover uniform elements. 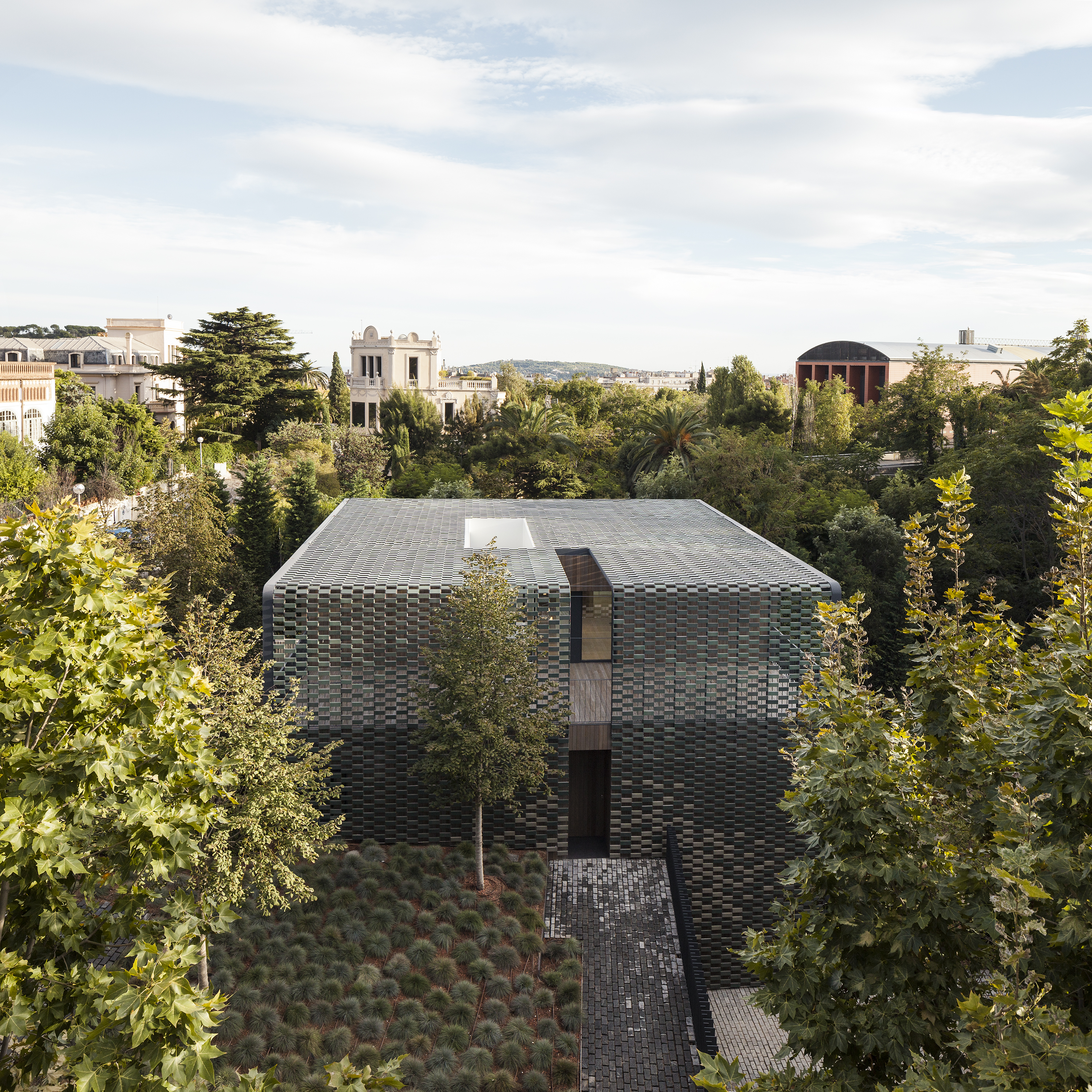 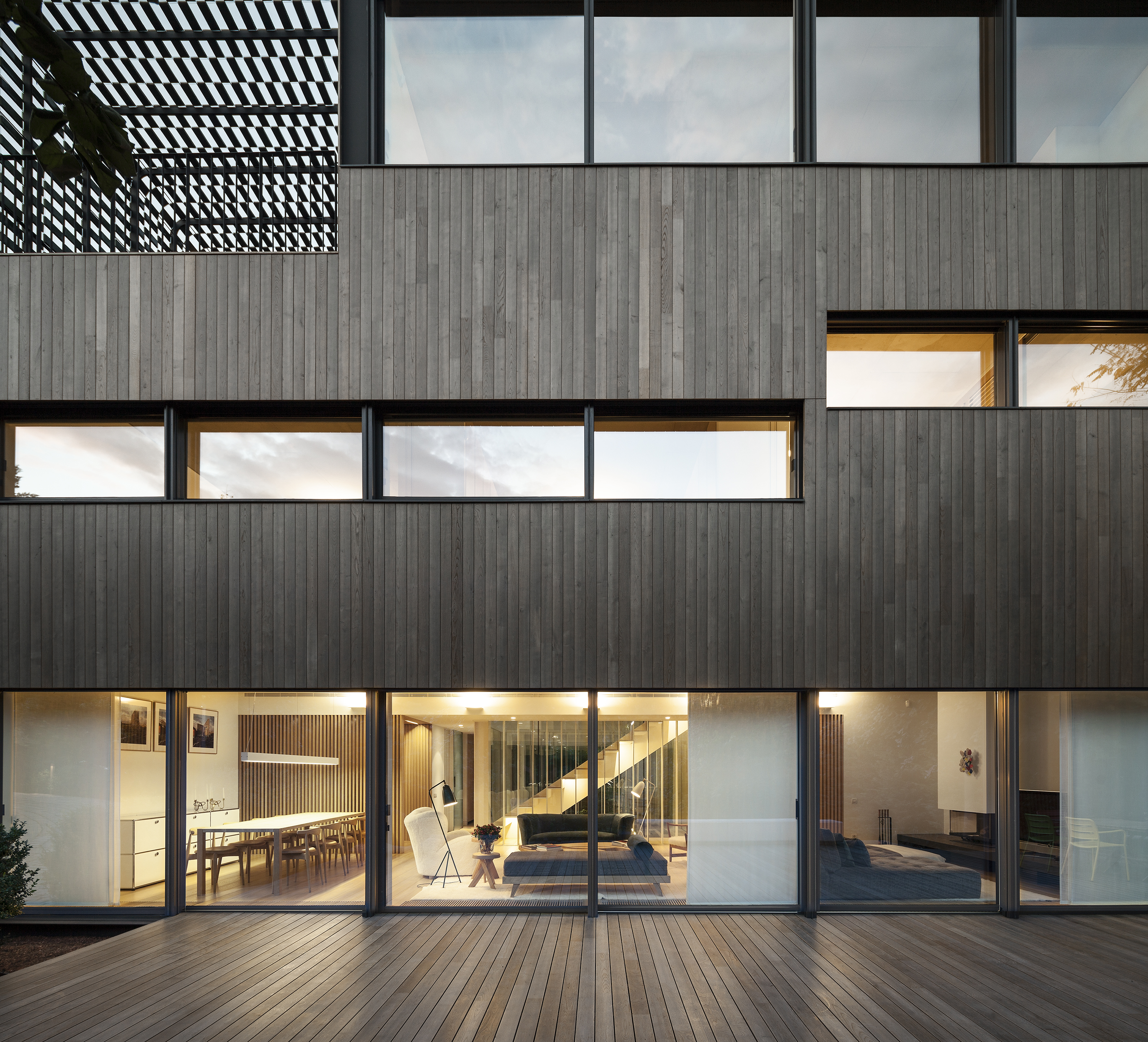 Built on a site with an accentuated topography and a historical house surrounded by a spacious garden area, this new house had to respond to the dimensions defined by the urban planning regulations. At the same time, the designers aimed for the project to integrate itself with the landscape and functionally adapt to the client’s needs. The result is a three-story volume that overturns all of its rooms in the opposite direction of the main façade, in order to achieve privacy and functional features demanded by the client. Meanwhile, the other façades are wrapped with a green ceramic skin that camouflages the house with its surroundings. The photographs explore this relationship between volume and façade, void and mass.

OneOcean Port Vell Marina in Barcelona is extending and improving its facilities in order to provide service to an increasing demand of cruising yachts. The project involves the construction of two buildings on the water and the landscape management of 16,000 m2 of quayside. The proposal creates a system capable of finding an architectural solution not only for the buildings but also for all the landscape elements involved, establishing a close relationship between them. A single unifying approach of the whole intervention is looked for in order to achieve an image of order and continuity. The buildings are covered by a lattice that has been specially designed for this project and that embraces the light of Barcelona.

Send us a photo. Tell us a story. Win $2,500! Architizer’s 3rd Annual One Photo Challenge is underway with a Late Entry Deadline on July 15, 2022! Start your entry for architecture's biggest photography competition here.
Trending Articles

The breathtaking Basque landscape is decorated with a blend of traditional and contemporary architec tural gems.